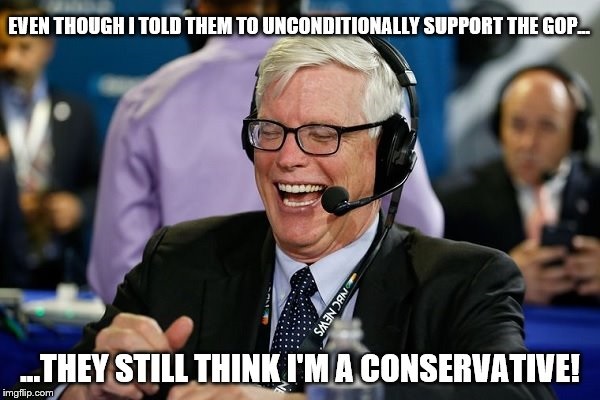 Yesterday I wrote an article describing how hard it is to walk the conservative road in the Age of Trump. In the piece, I shared how the party of Reagan has been hijacked by the life-long liberal Democrat with an “R” after his name currently in the White House and how conservatism has been rebranded to fit Trump’s nationalist ideology.

I received a lot of encouragement from like-minded conservatives who believe as I do and agree with me that it’s better to walk the right road alone than to walk the wrong road with the crowd.

As is always the case when writing about the death of conservatism under Trump, I also received a fair amount of criticism and personal attacks from the #Cult45 crowd who felt that I deserved to be lonely for daring to put my “self-righteous” conservative principles ahead of Trump and the GOP.

In yesterday’s piece, I also pointed out how members of the media formerly known as conservative have abandoned their principles and embraced Trumpism as the new conservatism, using their platforms to defend Trump when he attacks the Constitution and even to convince voters to vote Republican despite Trump’s loathsome behavior.

In an opinion piece for The Washington Post, Hugh Hewitt admonished Republicans to vote Republican, not because Trump and the GOP are delivering on their promises, but because even though the GOP is no longer the party of Reagan, it is still a “party of one with a fervent following in the tens of Millions.”

Yep. Hugh Hewitt believes you should vote Republican because Trump has a lot of Twitter followers.

Hewitt admits that Trump is a “giant wrecking ball on assumptions, standards, unwritten rules, and codes of conduct,” but since there have been a “number of significant accomplishments — Supreme Court appointments, rebuilding the military, and a “cooking economy” — we should ignore Trump’s lies, broken promises, unconstitutional policies, etc. (my words) and “return Republican legislative majorities (to Washington) that have figured out how to work with this most unusual president.”

What a nice, politically correct way of saying that the GOP has abandoned conservatism and has caved to Trump’s Obama 3.0 agenda.

The Coming Green Electricity Nightmare
Townhall
Biden to Coast Guard hero: 'Thanks - now get out'
Twitchy
Starbucks and Seattle Times Send Stupid 'Cease and Desist' Letters to Republican Senate Candidate
Redstate
Biden Washes His Hands of Gas Prices Now That They're Going Back Up
PJ Media