There Is No Evidence Linking Tornadoes to 'Climate Change,' but That Doesn't Stop the Ghoulish Fearmongering

A swarm of at least 30 tornados touched down in Kentucky, Illinois, Tennessee, Missouri, and Arkansas from Friday evening through Saturday. They left behind as many as 100 people dead and damage that will run into the billions of dollars.

This natural disaster immediately became something used by the Biden bunch to divert attention from the multi-faceted, and by “multi-,” I mean “all,” disaster that is the Biden White House. They blamed everything on “climate change.” So naturally, the various science-deniers who grift off of “climate change” grants from the federal government were on the job, too.

What decent people looked at as a tragedy, the “climate change” industry treated as a marketing opportunity or a political club with which to belabor their opponents. For a sampling, read Joe Biden and Other Deranged Liberals Ghoulishly Politicize Deadly Tornadoes, HOT TAKES: Swalwell and Other Despicable Takes on Tornado Tragedy, and Biden Blows a Fuse With What He Calls Tornadoes.

On Sunday, Biden’s FEMA Director Deanne Criswell was on Jake Tapper’s little CNN show on Sunday and used her interview to stoke fear.

TAPPER: And scientists warn that extreme weather events such as this one will only happen more frequently as the climate continues to warm. Is your agency, is FEMA equipped to handle this new normal?

And so we will continue to work on helping to reduce the impacts, but we’re also prepared to respond to any community that gets impacted by one of these severe events.

Not to be outdone, fringe climatologist Michael “no, really, it looks just like a hockey stick” Mann, notably labeled by Mark Steyn, then writing at National Review, as “the Jerry Sandusky of climate change*,” also weighed in on the subject to fluff for Biden’s “Build Back Better” scam and try to scare credulous politicians into giving him more money.

Here are some key parts of Mann’s interview, as transcribed by Newsbusters.

Wait, before we go farther, look at Mann’s eyes, then watch the first 10 seconds of this clip.

Okay, back to the story.

MICHAEL MANN: Yeah, thanks, Andrea. Normally I’d say it’s good to be with you, but unfortunately this is a tragedy that we’ve seen unfold, and some of the stories that you folks covered earlier are just heartbreaking. So what we can say is that we have a very warm planet right now. The Gulf of Mexico is very warm. That means there’s a lot more warmth and moisture because the warmer the ocean, the more moisture that comes off of it, and that moisture and heat have been streaming into the southern half of the United States. We had temperatures in the 70s and 80s Fahrenheit over the last week in a large part of the midsection of the country. And so that heat, that moisture provides the energy, the fuel, the turbulence that allows large thunderstorms to form and large squall lines like we saw with this storm.

That’s one of the ingredients that you need for a tornado. You need all of that moist energy in the atmosphere, that turbulence and instability that allows you to build large thunderstorms, but you also need spin in the atmosphere, and that happens when you come into contact with the jet stream, and so all that warm moist air is coming into contact with the jet stream. The jet stream is putting spin into the atmosphere. That’s the other ingredient. And you put those together, you get the sorts of huge outbreaks that we saw and the trend is very clear. If you look at the data, there is a trend towards these larger outbreaks, these larger tornado outbreaks.

There is a trend towards more intense tornadoes and the one that struck Mayfield, Kentucky, there were winds measured of 300 miles per hour. There was debris that made it 30,000 feet up into the atmosphere. It was a very strong storm. The official ratings haven’t come in yet. And so all of these factors are being exacerbated by climate change.

MITCHELL: And you just mentioned 35,000 feet up. I mean, that’s where airplanes fly, so it’s just unimaginable. The debris was thrown up and you can only imagine what happens when it comes down again. Let’s talk about the climate change ingredient in here, and there have been reports that tornado alley is going to be moving est as climate change, global warming affects our country.

MANN: Yeah, that’s right. There are large scale changes in atmospheric circulation that tend to redistribute that warmth and moisture, and the jet stream is changing. We know that as well. And those changing characteristics, if you put them together — and there scientists who have done that — they’ve taken into account the projected increase in this warm, moist air, the projected changes in the sheer in the atmosphere that gives you that spin, and what they find, particularly in the winter months we can expect an increase in the factors that generate these huge tornado outbreaks in the south central United States and increasingly in the eastern United States as well.

There are several different issues to deal with in this hot mess of misdirection; here are the main ones.

The number of tornadoes is not increasing.

Below is tornado frequency data from “Tornado Ally.” The unit of measure, “tornado-days,” reflects the number of days when tornadoes were detected. The trend is that there is no trend. The data points indicate the numbers are random. But there is an “if a tree falls in the forest, etc.” quality to it.

Our methods of detecting tornadoes have dramatically improved over the years. It would be a safe bet that many more tornadoes existed 70 years ago than were seen. In the chart below, it is nearly guaranteed that the post-1988 numbers are significantly inflated because that was the year the National Weather Service fielded Doppler radar to detect tornadoes.

If tornadoes were in any way linked to “climate change” and “climate change” was happening, we would expect to see the number of tornadoes increasing because of the “spinning” atmosphere…I think the technical term for this is “a swirley”…due to the Jet Stream and, you know, sh**.

Tornadoes are not a rarity in December.

It has been claimed by several outlets that powerful tornadoes spawning in December are a rarity. However, there is no evidence that is the case.

No less a source than Scientific American has posted an article titled Why the Southern U.S. Is Prone to December Tornadoes.

Spring is typically considered tornado season, but tornadoes can occur at any time throughout the year. The Southeast experiences a second peak in tornadic activity in the fall and early winter, and winter tornadoes are not uncommon.

There is no consensus among credible scientists that tornadoes are linked to “climate change.”

The Associated Press distributed an “explainer” that examined the subject. Even an outlet in such abject thrall to the “climate change” nutters concluded there was no provable connection.

Scientists are still trying to sort out the many conflicting factors about whether human-caused climate change is making tornadoes more common — or even more intense. About 1,200 twisters hit the U.S. each year — though that figure can vary — according to the NOAA National Severe Storms Laboratory. No other country sees as many.

Attributing a specific storm like Friday’s to the effects of climate change remains very challenging. Less than 10% of severe thunderstorms produce tornadoes, which makes drawing conclusions about climate change and the processes leading up to them tricky, said Harold Brooks, a tornado scientist at the National Severe Storms Laboratory.

There is limited evidence that tornadoes are becoming more severe.

From a lives and property loss point of view, we have to expect the per event damage inflicted by tornadoes to increase each year simply because of an increased population density in tornado-prone areas. However, the trend for severe tornados seems to be down, even considering more sophisticated instruments and metrics for measuring tornado severity. 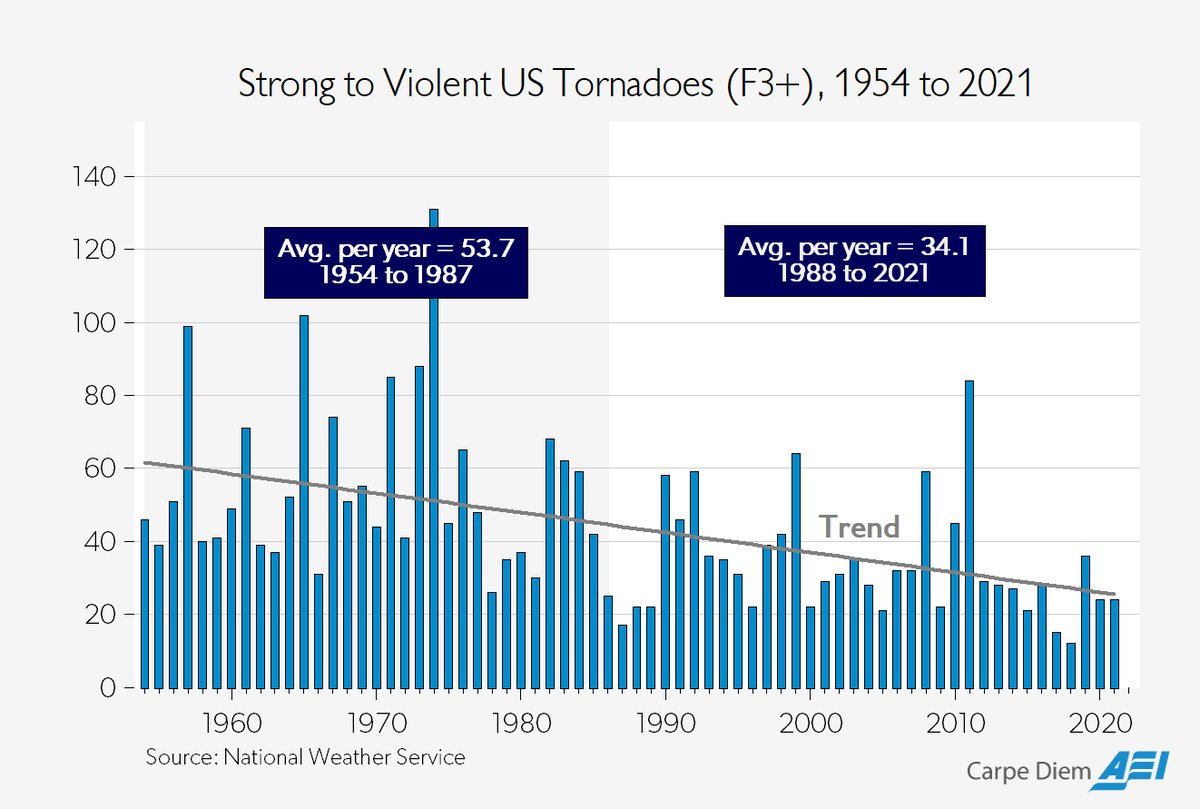 As of a few hours ago, there were no credible reports of the Mayfield, KY, tornado generally exceeding a wind speed of 300mph. Although this might have happened in unique conditions, overall, that tornado is being classified as an EF-3 rated tornado, that is, with winds between 136mph and 165mph.

Can we also note that the same people who have spent a couple of decades lecturing us that “weather isn’t climate” seem pretty damned focused on using transient changes to temperature and wind patterns as evidence of “climate change.” I’m sure the next time there is a blizzard in May, they will get back on message.

Tornados are dangerous. They always have been. Everyone knows that. But it takes a special kind of ghoulishness to use the death of innocent Americans due to a weather event to campaign for policy changes or more federal dollars for “climate change” grants.