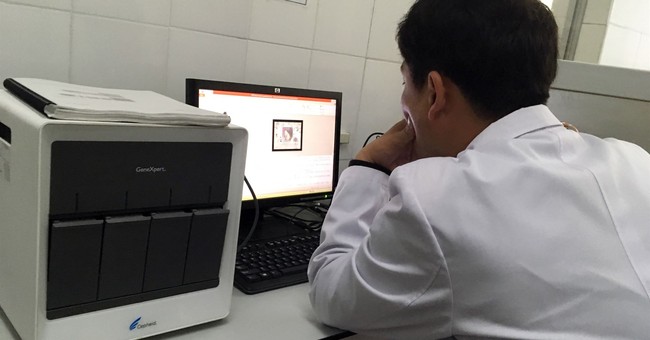 In this May 7, 2018, photo, a staffer works at a laptop next to an American-made GeneXpert machine used to diagnose tuberculosis at the National Tuberculosis Reference Laboratory in Pyongyang, North Korea. The machines at the lab can’t be used because officials can’t procure the materials they need to operate them. Despite a mood of detente following the summit between U.S. President Donald Trump and North Korean leader Kim Jong Un in June, ongoing sanctions are keeping life-saving medicines from North Korean tuberculosis patients and could fan a regional epidemic. (AP Photo/Eric Talmadge)

One of the reasons that the US has responded in a timely and aggressive manner to the Wuhan virus, which, thanks to Chinese duplicity and dishonesty with international health organizations, has expanded from a containable regional event to a global pandemic, is because to President Trump’s personal involvement and his willingness to take action now based on best available information rather than give the bureaucracy weeks to massage data and pick at their nether regions.

Earlier in the week, President Trump encouraged the use of an anti-malarial drug that had show promise in off-label use for Wuhan virus without the usual extensive clinical trials. Some people, primarily those with an attachment to the medical priesthood, didn’t like it but the call was not only right but courageous.

Another example of President Trump’s can-do attitude beginning to filter down through the bureaucracy just came over the wires.

To put this in perspective, current tests take at least 48 hours to process. Earlier in the Wuhan pandemic, tests could take up to nine days to yield results. This meant that test results were an interesting historical data point but of little real use. In the case of a nine-day lag, the test results would arrive after you were already over the disease (average course of the virus is 14-days, symptoms usually manifest themselves around 5 days after infection) or possibly dead. At a minimum, you had people needlessly quarantined for excessive periods of time. The 2 or 3 day lag, has similar downsides. This new test not only yields results in 45-minutes, it is not reliant on a state lab for the results but on a very common testing device.

The #Covid_19 cartridge has been designed to operate on any of Cepheid's >23,000 automated GeneXpert® Systems worldwide, with a detection time of approximately 45 minutes. So, practically a point-of-care test, if you have the new cartridge and GeneXpert system close to patients. pic.twitter.com/mpoaZqd7fD

This works in tandem with the Trump administration taking the brakes and blinders off FDA and pushing forward with allowing home tests for Wuhan virus via commercial labs. In this case, the test went from prototype to production in the Biblical 40-days.

Part of the reason that President Trump’s polling numbers have improved with the Wuhan crisis is that the public perceives his decisiveness and they also perceive his disdain for bureaucratic processes, no matter how well intentioned, that place certainty of outcomes over human lives.