A re-boot (pardon the pun) from one year ago:

Shoes. They’re a favorite topic of conversation — even a favorite pastime — for many.  They’re not just apparel or accessory; they’re a statement, an expression, a source of bonding.

Funny aside from long ago: My daughter was turning 3, and I took her to the Sears Portrait Studio to have some pictures taken because that was when I was still a good mom and did those sorts of things. While we waited in line, another little girl, who appeared even younger, came in holding her mother’s hand.  She and my daughter eyed one another up and down, as girls so often do, and then she cooed to my daughter, “I like your shoes!” It was such a quintessentially girl thing to do, I couldn’t help but laugh. Even by early toddlerhood, we’ve learned to relate to one another over…shoes!

Though I’ve never been all that big on shopping (unless we’re talking hardware or office supplies — or Target!), shoe shopping with my sisters or friends has most always been a fun occasion.  And what mom doesn’t smile (and maybe feel a slight bittersweet twinge) the first time her daughter borrows a pair of her shoes because they fit — both size and looks-wise?

It isn’t just women who love their shoes — men get in on the act, too.  I’ve certainly spent some time in the Cole Haan store in Chicago with my beau while he’s ogled their stylish selection.  (Note to self: Leave some time for Cole Haan while in Chicago next month!)

And when we wish to encourage empathy, we remind one another to “walk a mile in so-and-so’s shoes.” It sounds a bit trite, but really, there’s both wisdom and compassion packed into just those few words.

It occurred to me yesterday, as I watched my diverse group of friends express an exceedingly polarized array of opinions on social media, that we seem to have forgotten how to do that anymore.  Instead, we all too often seem primed and poised to hurl our Franco Sarto’s at one another rather than stopping to consider what a stroll in that guy or gal’s loafers might be like.

And when this troubling development is raised, the instinctive response is to point a finger at someone else as the primary cause.  “They started it!” “It’s his fault!” “Welcome to fill-in-the-blank’s America!” I think there’s plenty of blame to go around, including a heaping spoonful compliments of our 24/7 news cycle and social media, which have formed a somewhat sick-and-twisted co-dependent feedback loop in an increasingly frenzied effort to garner the most clicks, likes or views.  Viral, indeed.

Mostly, though, I blame us. That’s right — you and me.  Because ultimately, we are the ones who decide to click that mouse or flip that channel.  We are the ones who choose to hastily type and post that snarky response designed to verbally slap the smile off other’s faces while eliciting backpats from our like-minded posse.  We are the ones who, like Eddie Murphy’s mother in Delirious (WARNING: Language), whip our pumps boomerang-like through our monitors (and occasionally face-to-face) at one another — only it’s neither funny nor effective — unless your aim is discord.  And if, as you’re reading this, you’re thinking of a certain newly-inaugurated and questionably coiffed Twitter hound, stop and ask yourself this: Are you guilty of doing the very thing you condemn him for doing?  (Note: If your answer to this is, “He’s way worse,” your reflector might not be functioning properly. Poor form isn’t subject to the theory of relativity.)

That’s just it, though — we don’t stop, think, reflect anymore.  We react.  Faster and faster with each technological “advancement”.  And we sure as hell don’t contemplate 5,280 feet in someone else’s footwear.  (That’s feet, as in distance, not appendages, by the way.)  Shoot, at this point, we’re loathe to acknowledge others’ right to march to their own drummer. If they’re not in sync with us, then they’re enemies, evil, worthy of our scorn, not our friendship, our compassion, or even common courtesy.

These are women (and some men, but primarily women) who, in recent times, might have happily gotten together for a night of Bunco; who’d have shared over the phone their concerns about their significant others, their parents, their children; who’d have kvetched about their jobs; who’d have gladly spent an afternoon traipsing through DSW, Macy’s and Dillard’s trying on shoes; who’d have stood in line or at a party and broken the ice by exclaiming, “Ooh, I love those shoes!”  But now?  No.  She’s either on board with your point of view, or she’s dead to you. We may have laced up our tennies to march with purpose and pride, but we’ve apparently lost our way.

And, no, I don’t believe it’s always been like this.  While my immediate family was on the same page politically as I was growing up, my parents’ best friends (and my godparents) were in different books. My beloved Grandmother was a staunch Republican, while my parents were diehard Democrats, and there was never so much as a thrown fork or slammed door.  One of my best friends in law school was as conservative as the day is long and we fought all the time over politics and such — but in friendly fashion. It was the Euchre matches among our group that got truly heated — but even those didn’t touch what now passes for “discourse”.  And most importantly, my views have evolved over the years from quite liberal to moderately conservative/libertarianish while the same people appear to have liked and loved me just the same.  Recently, though, I’ve felt increasingly as if some of those relationships were on rather thin ice — like the wrong comment or shared article on social media might suffice to sever a years-long bond.

Ironically, it was the words of our previous President  — someone with whom I’ve rarely agreed — which were then called to mind:

If our democracy is to work in this increasingly diverse nation, each one of us must try to heed the advice of one of the great characters in American fiction, Atticus Finch, who said “You never really understand a person until you consider things from his point of view…until you climb into his skin and walk around in it.”

Okay – so that referenced skin, not shoes, but the point is the same.  We’re so afraid to do that anymore — or worse, it doesn’t even occur to us, like it’s beneath us to extend that sort of consideration to one another.  As someone who’s spent much of my life being “wrongheaded” in the eyes of many people I know, respect and love, I call hogwash.  Your ears aren’t going to fall off and you’re not going to melt like the Wicked Witch of the West if you hear or read a viewpoint that doesn’t match your own.  You may not ever agree with it.  You may even find it uncomfortable or even repugnant. But you will live. And maybe, just maybe, gain a smidge of understanding as to where that other person is coming from.  Which isn’t a horrible thing. In fact, when you realize that, viewpoints aside, they lace their shoes up just like you, the world starts to look a little less angry and bleak.

I took a moment yesterday afternoon to remark on Facebook on the fact that the presence in my timeline of vastly different takes on the transition from Obama to Trump assured me that I have a diverse group of friends. I love them all, and wouldn’t have it any other way. And I’d gladly walk a mile in their shoes — or, at least, with them in their shoes.  Or better yet, go shoe shopping. 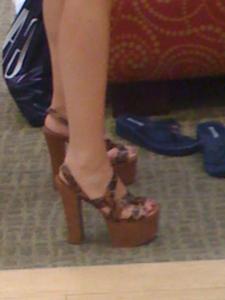