Will Joe Biden Take Questions on Afghanistan Now, or Will His Mic Get Cut Again?

Though at this early stage we have no confirmed numbers on injuries and deaths of US troops and civilians (Americans and Afghans alike) as a result of the two terrorist attacks that happened today in Kabul, Afghanistan, in all probability the numbers are high if what we’re seeing from horrific video reports posted on social media are reliable indicators.

While the wisdom (or lack thereof) of America’s foreign policy approach (past and present) regarding Afghanistan is already being debated and will continue be in the weeks, months, and years to come, what shouldn’t be up for debate at all right now no matter what side of the aisle one sits is that President Joe Biden has largely been an AWOL “leader” as this disaster has unfolded over the last two+ weeks, worsening by the day with new information on how the Taliban is ruling with an iron fist while at the same time mocking America every chance they get.

The embarrassment that has been the Biden administration’s response to the Afghanistan crisis was perhaps never more apparent than it was Wednesday, with White House press secretary Jen Psaki being put in the awkward position of having to “convey” the message Biden should have delivered yesterday but didn’t because his handlers cut his mic in hopes that the idiotic and tone-deaf quip he had to a reporter’s question (which Biden was supposed to ignore as per the norm) about Americans stranded in Afghanistan wouldn’t be heard. Unfortunately for the Biden team, NBC News reporter Pete Alexander heard the “answer” and reported it:

I asked President Biden what he will do if Americans are still in Afghanistan after the 8/31 deadline.
His response: “You’ll be the first person I call.”
Took no questions. pic.twitter.com/MlyFIayrMZ

24 hours later, and with American and Afghan blood spilled from this morning’s suicide bombings, here’s how things are shaping up at the White House right now:

WH updates: “The President met with his national security team this morning, including Secretary Blinken, Secretary Austin, Chairman Milley, and commanders on the ground. He will continue to be briefed on updates on the evolving situation throughout the day.”

Press briefing w @PressSec at noon is being delayed, as is the @POTUS meeting w Israeli PM.

So the President is being briefed, meetings are being canceled/postponed, and Psaki is being updated and given talking points that no doubt will not age well in the coming days.

But still no word yet on two things:

1) Will the President of the United States, who is also the Commander in Chief of the U.S. military, be addressing the American people today on what happened?

2) Will he finally, at long last, answer questions journalists have on Afghanistan?

In my opinion, if he’s not planning on taking questions (and arriving ON TIME to do so) then he shouldn’t even bother speaking to the nation on this matter, because he’s already given scripted speeches read off of a teleprompter on Afghanistan, and with each one, the image of him walking away from the podium without taking a single question has been burned into the minds of many both here and abroad, the symbol of a President who does not have control of the situation and perhaps never has.

As I’ve said before, leaders lead, while followers merely give speeches and hope people don’t notice the severity of their ineptitude. That Biden is not a leader is something we’ve known for decades. It’s something he fine-tuned throughout his Senate career and during his time as President Obama’s VP. Unfortunately, it’s playing out for not just this country but for all the world to see at a crucial moment in America’s history.

We don’t need Jen Psaki running interference anymore, nor do we need any more speeches, Mr. President. We need answers. Will you finally answer for your administration’s actions or will you continue to run and hide while our enemies and allies are watching? The choice is up to you.

For those still stranded in Afghanistan and their worried families, I pray to God the choice you make is the right one.

Related –>> Watch: Fed up Afghan Woman Absolutely Goes off on Joe Biden by Telling It Like It Is 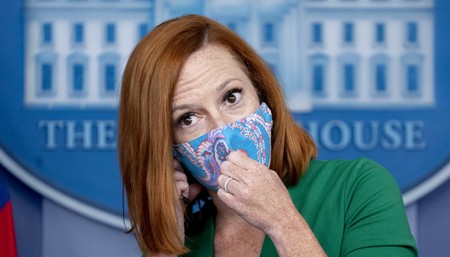