This story was overlooked — by me at least — last week when it was reported by the Des Moines Register that Douglas Jensen of Des Moines was indicted by a federal grand jury in the District of Columbia in connection with his actions as part of the protests at the US Capitol on January 6.

Douglas Jensen is reported to have turned himself in to Des Moines Police on January 8 — Friday — suspecting that he might be “in trouble.”  In a follow-up interview with the FBI he admitted that he was one of the individuals appearing in videos taken of protester activities inside the Capitol two days earlier.  On Monday, January 11, the grand jury in Washington returned an indictment under seal charging Jensen with six different felonies.

So far as I have been able to find — and to be honest I haven’t looked into every person arrested to this point — Jensen’s case is the first one where an indictment has actually been issued by a grand jury.  All the other accounts I have read involved cases where defendants have been charged through “criminal complaints”, which are a “place-holder” prior to a grand jury indictment being sought and obtained.

Jensen was initially charged by way of a criminal complaint filed on January 8 — the same day as his interview — likely for the purpose of obtaining a federal warrant for his arrest.

The government has made public many such criminal complaints — and the supporting affidavits from FBI agents upon which they are based — but Jensen is the first person where an indictment has also been published in the media.

The affidavit in support of the complaint lays out the facts of Jensen’s conduct based largely on the statement he gave to the FBI that same day.  It identifies Jensen as the person captured on various video recordings wearing a “Q” shirt, and states he is an “adherent” of “QAnon”.  Frankly, I’m not sure what being an “adherent of QAnon” is supposed to mean since “QAnon” has had a quite “fluid” description and definition over the past couple years. 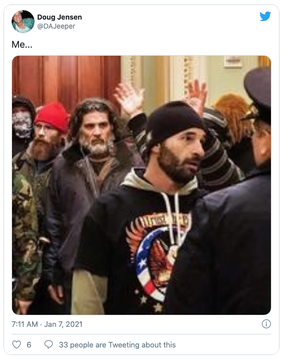 The complaint affidavit states that Jensen admitted he was the individual seen in the video wearing the QAnon shirt.  It alleges Jensen was among the first persons to enter the Capitol ahead of the larger crowd, and several other individuals appeared to be following him.  The complaint affidavit then describes the episode captured on video where an individual — identified in the affidavit as Jensen — chased a retreating Capitol Hill Police officer up a flight of stairs, with several followers behind him.  The complaint alleges that Jensen admitted to having led the chase of the officer up the flight of stairs before their chase was halted by several other Capitol Hill Officers who were at the top of the stairs.

Perhaps the most controversial aspect of the charges is that the FBI Agent who wrote the affidavit states that Jensen admitted that he attempted to be among the first persons entering the Capitol because he wanted his tee shirt to be captured on video covering the event so that “QAnon” could “get the credit” for what was happening.

The charges against Jensen are similar to the charges filed against others by way of complaint — civil disorder, entering and remaining in a restricted building without authorization, interference with police officers during a disorder, etc.

One noteworthy charge that is not made in the indictment is a charge of “conspiracy.”  The government does not allege that Jensen was part of an agreement made ahead of time with one or more other protesters to enter the Capitol to commit one or more crimes while therein.

That is possibly just a function of the minimal time lapse between Jensen contacting the Des Moines police and the presentation of evidence to the grand jury.  Indictments charging conspiracies take longer to write and present than indictments that charge individual action — especially such as was the case here where Jensen seems to have admitted to his participation in his interview.

Jensen is set to have another court appearance in Iowa tomorrow.  This is likely a “detention hearing” during which the judge in Iowa will make a decision on whether Jensen is released from custody and ordered to appear in a Washington DC federal court after traveling there on his own, or if he will remain in custody and be transported by the US Marshal’s “ConAir” service.

Lisa Murkowski Gets Surprised With an Old Neera Tanden Insult, and It's Absolutely Hilarious
Bonchie