It Is High Time We Discuss Donald Trump's Pants

Of the many subjects on or relating to former President Donald J. Trump, the last thing I thought we would be talking about is his pants.

Sure, there is a continuing claim that he is still the President and will be reinstated after voting audits in various states. There is his briefly-run blog that is gone now. There are decades of antics. But, no, we must talk about his pants, because people who hate Trump to the point of derangement continue to need him in order to continue to get clicks and ratings.

Over the weekend, Trump stood on a stage with wrinkled pants. This came across to some as backward, because they have clearly never actually worn pants before. It started with the usual Loud Voices, grew to blue checkmarks, and eventually turned into actual news outlets talking about it. Fact-checking outlets at Snopes and USAToday even had to put up analysis and definitively say that, no, his pants were not backward.

It should have been obvious, given that noted fiction writer Stephen King was tweeting that Trump’s pants were backward.

Have… have any of the people who tweeted about this ever worn pants with a suit? Or any pants with a zipper and a button/snap/etc.? Because while I may not be Trump’s biggest fan, I know for certain that he is old enough to have worn pants multiple times and know that it’s impossible to make them stay up if you can’t button and zip them. You never see him not wearing pants. He always wears them correctly.

This, by the way, is the same group of people who mocked anyone who took offense to Barack Obama’s tan suit (which was a crime against humanity and fashion). More importantly, they are also the people who say everything the right believes is a conspiracy theory. If it’s a theory the right generally accepts, they must label it a conspiracy theory that has no basis in reality and attack them for it. Meanwhile, it turns out the evidence points to a lab leak from Wuhan is more likely than not the origin of COVID-19 and Donald Trump knows how to wear pants.

In the graphic novel Arkham Asylum: A Serious House on Serious Earth, a psychiatrist at Arkham Asylum theorizes that the Joker really isn’t insane, but has achieved a level of sensory overload that his mind cannot handle, and thus he reshapes his personality every day. While I don’t think those suffering from Trump Derangement Syndrome have achieved a level of super sanity or have the intelligence of the Joker, they clearly have the unstable personalities part down perfect. One day, they tell us to believe in science, the next day they are screaming about Trump’s FUPA (please for the love of God don’t look that up if you don’t know what it is I’m begging you).

The thing is, for a bunch of people who say Trump is the worst thing to ever happen to America, you would think they wouldn’t give him any sort of airtime. If you let him slip from the public consciousness, he won’t have an impact on America. But when you start reporting on the possibility that a man who has worn pants thousands upon thousands of times may have put his pants on backwards before a big speech, you’re not actually interested in him going away. You are fully committed to him being around forever for political and click purposes.

CNN’s website is still talking about Donald Trump vs. Liz Cheney, a news cycle that was depleted weeks ago, for God’s sake. You don’t report on that unless you just need his name in your headlines for clicks.

But, here we are. Donald Trump must not know how to wear pants because people saw a grainy stream from a speech. That’s a totally normal reaction to have when seeing him. That God for the Internet, which is truly the pinnacle of human knowledge. Now, if you’ll excuse me, I must go and fling myself into the sun. 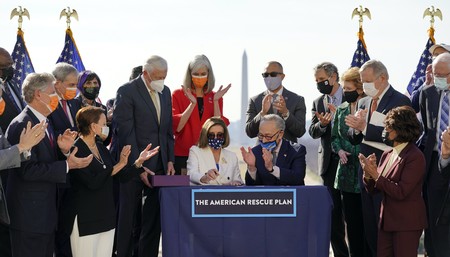