Keep it up, Snowflakes - You're Doing the Impossible. 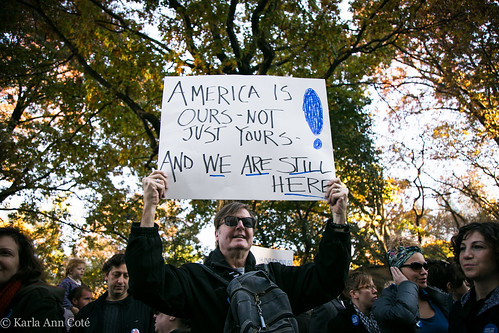 Congrats, special snowflakes. You are well on your way to doing what more than a generation of conservative activists hasn’t been able to accomplish – uniting the various factions within the party.

During the 2016 election cycle (which seems like it started five years ago) conservatives have been destroying each other while the Democrats sat smugly and quietly to the side, enjoying the warmth from the dumpster fire. Sure, they ultimately had their own issues this summer between Bernie and Hillary (sheesh Bernie, didn’t you get the MEMO that this year was HILLARY?), but mostly they’ve been content that they’d win this year, even after nominating one of the most polarizing and unliked candidates ever.

As Donald Trump picked up steam on the GOP side and the #NeverTrump movement gained momentum, as long-time GOP voters left the party to vote McMullin or Johnson or simply not vote at all, Dems were giddy. They’re pretty good at stepping aside while the enemy defeats himself.

Until about 9 pm Pacific time on November 8, 2016. That’s when they learned how to defeat themselves.

Hillary was done because working-class America is done being lectured to, done being judged, done being told they’re inherently bad because of the color of their skin, their sexual orientation, or their religious beliefs. They’re sick of being referred to as simpletons, and of the ruling class assuming they know best how to run everyone else’s lives. They’re sick of progressives extending more understanding and compassion to ISIS than to their fellow Americans.

But Dems/liberals don’t understand that yet. This election was a referendum. It was a referendum rejecting every PC, divisive, name-calling, intolerant, virtue-signaling behavior that the modern liberal assumes is normal.

And the more they double-down on their buzz words and pointless protests, the more the GOP unites.

This Facebook post from Scary Mommy (a site I sometimes love) ranting about Steve Bannon is a prime example of the left’s destructive attacks that are suddenly ineffective.

But she makes me wait a while to get to the good stuff. First she notes Bannon’s connection to Breitbart – for many progressives, that’s enough. She lists the standard labels of racist, sexist, homophobe for Breitbart and its readers. Bannon’s heart is obviously full of hate, and now Trump is “placing all that hate right smack in the middle of the White House.”  (I haven’t yet found the Scary Mommy post that rants about Valerie Jarrett being placed center in the White House.)

And he has harsh words for progressives. I don’t know about you, but I’m shocked that a conservative feels that way.

“He’s under fire for his summation of progressivism, which he calls, ‘all about victimhood.'”

Then she calls him out for Breitbart headlines (that he totally wrote, I’m sure) that hit all the pressure points, such as “Birth Control Makes Women Unattractive and Crazy.”

But the author saves the bulk of her venom for Bannon’s thoughts on spanking – four paragraphs devoted to proving Bannon wrong, citing psychological and scientific studies. Reading her rant, you’d think Bannon wrote a white paper touting the long-term societal benefits of spanking.

Nope. He wrote one sentence in an email chain between himself and a Breitbart editor, saying, ““I’ve got a cure for mental health issue. Spank your children more.”

Does anyone really believe that in that sentence he was trying to have a policy and psychological discussion about the merits of spanking with Matt Boyle?

Where the heck is that “offensively ableist” part again? Okay, here we go.

“He’s not just offensively ableist — because it’s totally possible, everyone knows, to smack the autism or depression out of your kid. He’s scientifically wrong.”

So the author is saying that in that one sentence Steve Bannon was making a scientific statement that parents can and should smack the autism and depression out of children?

Perhaps he was making a flippant statement? Being sarcastic? Alas,the sarcasm detectors on the left haven’t been calibrated in decades.

I’m not supporting or opposing Bannon. I don’t know him. I have quite a few friends who have worked with him, and opinion is split there too. But like him or not, Bannon was CEO of the WINNING campaign. As even Piers Morgan agrees, winning is important.

But the more the left freaks out about Bannon and hosts protests opposing his hiring, the more the right unites against a common enemy.

So, cupcakes, here’s the point. When you need to take a “mental health” day to recover from the election, when you continue using the phrases “trigger warning” and “safe space” when conservatives speak, when you create silly “safety pin” campaigns, when people die because your “protest” blocked an ambulance route to the hospital, when you continue to label any speech that disagrees with your worldview as hate speech, you are patching the gaping holes in the foundation of GOP HQ.

Keep it up, please. If you do, by Inauguration Day the Trump administration will have the support of an united party and, with a GOP-led Congress, roll back the destructive policies of the Obama administration.