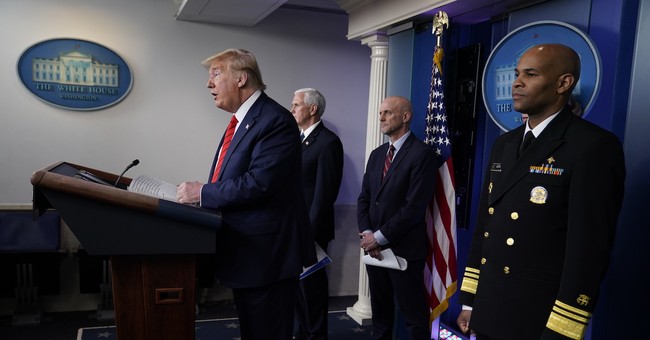 Watching the news will give you plenty of doom, but little light on the facts for known reasons.

One of the more revealing aspects amid the Wuhan coronavirus crisis has been the abject malpractice on display with the media these past weeks. Whether it is focusing on the supposed racist connotations in naming the virus, to working harder to blame President Trump for being lax on the viral response while ignoring that China spent weeks allowing the pandemic to grow and spread, our media complex has been focused on nearly everything but helpful informative reporting.

The primary way the journalists have undermined their credibility has been in the way they try to scorch Trump for the very items they had called for. They declared he erred in not closing off air travel, then after doing so he was called ‘’xenophobic’’. For how long was the demand being made by the press that the administration wasn’t working to get a cure developed? This week, when it was announced some existing drugs could possibly lend a solution, Trump was dubbed a ‘’Nazi’’ for purportedly experimenting on patients. The demand had been made for updates by the administration, but now the press has said the President has to stop or networks block broadcasts — coinciding with his rise in the approval numbers.

We have even seen the narrative flip in the matter of one day. This past Friday, when the President tried to convey a message of hope to the general public, many in the media fact-checked him and were critical of a ‘’false’’ message. Then the very next day, the Washington Post posted a column that was critical of the President for NOT showing enough empathy. So while it is clear the press is not concerned with presenting details, looking into some of those details becomes needed.

The subject of ventilators, a needed device for those suffering from respiratory issues connected to the flu-like malady, has been one frequently raised to become critical of the administration. It has been claimed the President has been lax in getting these into hospitals, a result of Trump supposedly downplaying the impact of this outbreak. The message is that we have a severe shortage, and little is being done to get these into hospitals.

Except there are ventilators available. An NBC report details how the country currently has approximately 160,000 ventilators on the hospital market, but there are also more in a federal backup program.

There is a federal stockpile of ventilators — part of the $8 billion Strategic National Stockpile of medical supplies housed in secret warehouse locations around the country. The number of ventilators in that stockpile is classified, but Vice President Mike Pence said Wednesday it is over 10,000.

Face masks are another item said to be in short supply, Trump’s alleged short-sightedness said to be the cause of another medical shortage. The 3M Corporation has ramped up production of N95 face masks, tens of millions of these now being cranked out at a furious pace. The Trump administration, according to Mike Pence, has seen fit to pass new legislation to free up this company, and many others to address the mounting market needs.

This is something that has been taking place with frequency, freeing up the free market from oppressive government restrictions. New legislation provides manufacturers of N95 masks protection against lawsuits when selling to health care workers, Pence said. The change means 3M will be allowed to sell 420 million masks a year to the American health care sector, he said, according to the newspaper.

3M has been seeing fit to have this production of the masks increased to 100 million monthly. This is something the company has undertaken for the past 2 months now, which takes things back to the period in January when Trump is accused of not caring, and not taking any action whatsoever, according to our press corps.

Another problem being faced is bureaucratic sloth, in place in the government for years. Some initial Wuhan virus tests were denied to patients, not due to unavailability but because the FDA had restrictions in place that prevented certain local areas from administering the test. In a similar fashion, FDA blocks have kept available supplies from being distributed.

Just one other example of the work being done actually defying the reports from the slanted media involves the Secretary of Health And Human Services, Alex Azar. He had some information regarding the administration’s focus on influenza vaccine efforts.

Today, @POTUS is affirming his commitment both to America’s national security and to America’s health by signing an executive order to modernize influenza vaccine manufacturing. https://t.co/IhVFeSP4g0 pic.twitter.com/PVlw5iaSYM

Faster methods of producing influenza vaccines will help keep Americans safer both from seasonal influenza, which kills tens of thousands of Americans each year, and from the potential of pandemic influenza, which is the single greatest biodefense threat our country faces.

While certain to be a bit of a surprise to many listening to our media, now peer back and note the dates on those tweets. Azar announced these measures being put in place last September. There could be an excuse for the press missing out on this crucial detail — they were rather obsessed with impeachment back at that time. But this does little to explain their ignoring of this detail today.

We are being pounded with the message of Trump being lax in his response to a pandemic when in truth steps were taken last fall as a preparation. This also flies in the face of the now disproven reports of the President defunding and dismantling the pandemic response offices. It becomes very revelatory that so few in the press are willing to acknowledge the administration making moves months ahead of the outbreak to aid in the response.

But the press has been far more preoccupied with politicizing the pandemic than in detailing what is being done, to say nothing of the steps that have been previously taken. To show any level of competence or accomplishment by this President is anathema to their narratives. It is more important to them to highlight the missteps and over exaggerate projections in order to damage the President’s image — far more important than informing the public and stemming panic.