According to the Jerusalem Post, Belarus faces an organized sabotage campaign aimed at railroad lines carrying Russian troops and supplies into Ukraine.

The General Prosecutor of Belarus opened a criminal case into what it called an act of terrorism carried out by an organized group against infrastructure of the Belarusian Railway, according to TASS.

The general prosecutor added that signaling facilities and other transport equipment were rendered “unusable.”

The BYPOL group, which consists of former security officers who support the opposition in Belarus, said on Tuesday that a series of sabotage actions had targeted the railway system in Belarus, disrupting the movement of military trains in the country.

“Belarusians, today our country is drawn into a criminal and bloody war with the fraternal Ukrainian people on the side of the aggressor – the Russian Federation,” wrote BYPOL in a Telegram message. “It is our duty and in our power to do real things to stop it, free ourselves from the occupation of Russian troops and restore the good name of our ancestors. ‘Rail war’ is the knowledge that we inherited, this is what we can do and what each of us can do.”

To give you an idea of what is being discussed, this is a map of the Belarus rail net. As the border between Belarus and Ukraine is still in the hands of the Ukrainian Army, the main rail lines of concern are probably those entering Belarus from Russia terminating Gomel. Those lines resupply the troops attacking Kiev. 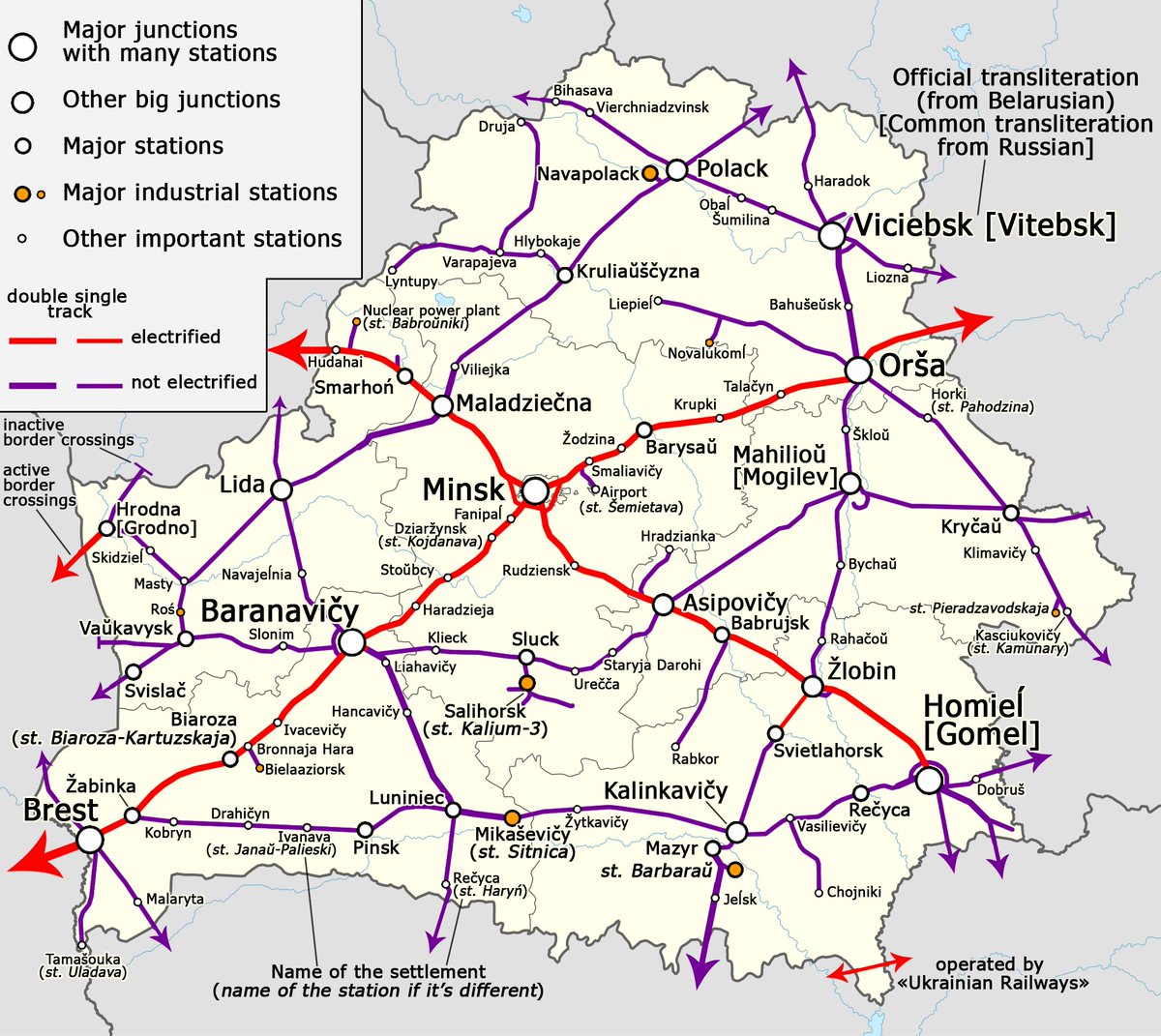 The problem is real enough that the Belarus railroad system has started paramilitary patrols of the rail lines to prevent damage (this is from a Ukrainian site quoting a Belarus site on Telegram).

The current government of Belarus will send special forces to protect the railways in the south part of the country – Polissya.

A pro-Ukraine Belarus site reports that several people have been arrested and charged with damaging rail lines.

According to the Viasna human rights center, eight people were detained in Belarus after the start of the war in Ukraine on charges of sabotage on the Belarusian railroads. Railway workers said that due to the sabotage (i.e., “rail war”), trains carrying Russian military equipment and ammunition stopped moving across Belarus. The detainees face up to 15 years in prison.

A year ago, Belarus was staggered by a series of massive protests against the repressive regime of Putin stooge Alexander Lukashenko.

Even though the protests were undoubtedly part of another “Orange Revolution” organized by George Soros and the WEF so as to further the cause of globalism and sexual perversion, probably with the help of Hunter Biden and Victoria Nuland, the Lukashenko regime was finally able to suppress the street demonstrations. Some of that protest movement is resurfacing as a protest against any involvement by Belarus in the war between Russia and Ukraine.

One also can’t rule out activities by Ukrainian special forces which, unlike those employed by Russia and Belarus, have had actual training in doing something other than breaking heads of civilian protesters.

Russian forces are already under pressure by the rear area campaign being waged by Ukrainian Territorial Defense forces inside Ukraine. If an active insurgency takes root in Belarus aimed at the rail trunk resupplying the Russian troops in the northern theater of the Ukraine front, they will find it hard to sustain themselves. The real question is if the sabotage campaign takes off, and it looks as though it is primarily the work of Belarus citizens rather than Ukrainian commandos, how hard will Lukashenko try to suppress it? His flirtation with invading Ukraine (see Belarus Prepares to Join Russia’s Unprovoked Assault on Ukraine and Oops: Belarus Leader May Have Accidentally Revealed the Next Country on Putin’s Invasion List) created enough domestic problems that he was forced to abandon his dream of becoming a Slavic Mussolini. A real crackdown in the service of an unpopular cause by an unpopular ruler could result in Putin seeing his vision of a “sphere of influence” transformed into two nations that look to the West for business and defense.