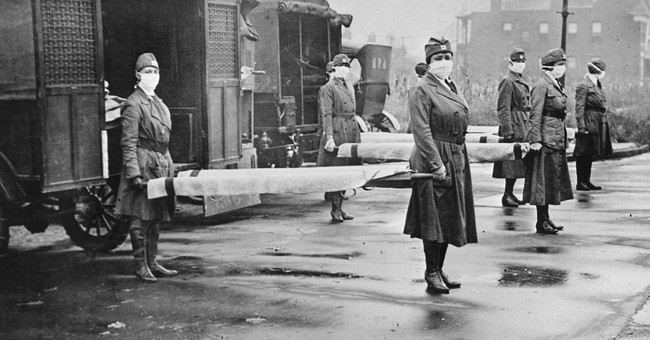 In this October 1918 photo made available by the Library of Congress, St. Louis Red Cross Motor Corps personnel wear masks as they hold stretchers next to ambulances in preparation for victims of the influenza epidemic. A century after one of history’s most catastrophic disease outbreaks, scientists are rethinking how to guard against another super-flu like the 1918 influenza that slaughtered tens of millions as it swept the globe in mere months. (Library of Congress via AP)

The more we know about the Wuhan virus, the more it becomes obvious that 1) this panic is driven by utterly atrocious models (have you seen the ridiculous ‘of course the models were wrong, models are always wrong’ defense of why we should believe the models?), 2) which were given critical mass by a media that were frantic to hurt President Trump as he easily moved past the Russia Hoax and Adam Schiff’s silly little impeachment gambit and 3) transformed into panicked policies by gutless or duplicitous governors that were, in turn, 4) accepted by a supine populace.

So now, the Wuhan fantasists are turning to the old stand-by of warning of dire consequences. This morning, Dr. Anthony Fauci claimed against all evidence that an early removal of restrictions would result in a deadly ‘second wave’ of infections when there is zero evidence of a deadly first wave. And then there are the faux-historians trying to convince their readers that Wuhan is just like the 1918 flu and that removing restrictions that were imposed in some places during that pandemic will inevitably lead to a major resurgence…the same ‘second wave’ nonsense…of the virus.

By November cases were down, and public health officials recommended re-opening the city.

Residents rushed to entertainment venues after having been denied this communal joy for months. The Mayor himself was fined by his own police chief after going to a show without a mask.

San Francisco residents were fed up. This was the second wave of the pandemic, and they had already spent months between Sept and Nov being hassled, fined and even arrested for not having a mask on. Challenges of constitutionality were heard.

The San Francisco Chronicle turned against the notion of mandatory masks.

Was the death rate high enough to justify remasking?

Wasn't this just the return of normal seasonal colds?

How much was this due to a public 'scare' and hype?

On Dec. 18 someone had sent what appeared to be an improvised explosive device to San Francisco's public health official signed, 'Compliments from John.' (!!!)

But the public declined to listen to SF's Public Health Officer.

On Dec 19, officials voted down a mandatory mask order.

So on Jan 10, 1919 local officials voted to approve a new mandatory mask order after 600 new cases were reported that day.

Citizens were arrested/fined for not having masks on, but widespread disobedience of the order continue & large numbers of citizens refused to wear masks.

Chaos broke out until someone shouted, "I rented this hall and now I'm going to turn out the lights." (Mak note: lol)

I haven’t read anything about how many people became sick DUE to the Anti-Mask League event, where 1000s gathered to protest without masks.

So we may not know how many people, if any, became sick due to this congregation

But safe to say it was not helpful during pandemic

Of course, the SF Public Health Officer — the 1919 version of Dr. Fauci, got no credit for the decline in influenza cases.

Ultimately San Francisco was one of the American cities hardest hit by the Spanish Flu.

673 per 100,000 people died during the pandemic due to influenza and pneumonia, per U of Michigan.

We learn through this episode that various groups of Americans have been pushing back against public health measures for more than a hundred years — and for similar reasons!!

This is essentially a report that I pieced together by reading sources after getting curious about the 1919 Anti-Mask League. Any mistakes are my own.

I started by drafting a few tweets and then spent an hour and a half researching it last night. One thing led to another…

What this Mak character and, to a certain extent Fauci, are both afraid of is not of a resurgence of what is going to eventually be classified as a minor viral infection but of Americans having the agency to determine when the advice slung about by experts is actually a lot more harmful than the problem it purports to solve. This threatens to increase your independence and to decrease the power of both the expert class and the media who act as their catchfarts. They are attempting to use fear and guilt to keep you from evaluating an increasingly detailed body of information on Wuhan virus and making your own decisions as to the most reasonable course of action.

Some key differences between 1918 flu and Wuhan virus bear noting. First and foremost, it took place in 1918 and our understanding of viruses and transmissibility and treatment of co-infections and medical practice in general were somewhat inferior to those of today. Well, perhaps not in New York, if their death toll is any evidence, but definitely the case in the rest of the nation. For reasons that are still not understood, the 1918 flu killed large numbers of healthy adults, including young adults. Beyond the fact that both Wuhan and 1918 flu were caused by viruses there are zero grounds to compare the two on basically any grounds.

What Mak is trying to do is make the case that unless you do exactly what you are told by every Karen you come into contact with you will be directly responsible for people dying in a dreaded second wave of infections and you will show that you are a truly bad person.

Here are the facts. The chances of a second wave of infections are pretty high because we are relying upon a silly and dysfunctional strategy (‘social distancing’) in the absence of any effective vaccine (and I would argue that a vaccine is being pursued to the expense of medical therapeutics which would have a much greater chance for success even if there is no Nobel Prize at the end of the line). None of the horrors inflicted upon the economy and the livelihood of Americans has been proven to be worth anything. For instance, the infection/death rate in states with none of the ‘social distancing’ nonsense are way below the national average.

As I said on Saturday, this has nothing to do with your health or safety and everything to do with government’s ability to control you and to set the predicate for future ’emergencies’ that also permit Constitutional rights to be done away with in the name of ‘public health.’

We Might Finally Get Some Answers on What Killed the Red Wave
Townhall
Don Lemon is exactly right (!) about pay disparity between US men's and women's nat'l soccer teams
Twitchy
Martha MacCallum Leaves John Kirby Stuttering Over Differing Treatment of Twitter and Apple
Redstate
Why Is the Left So Obsessed With Harming Children?
PJ Media