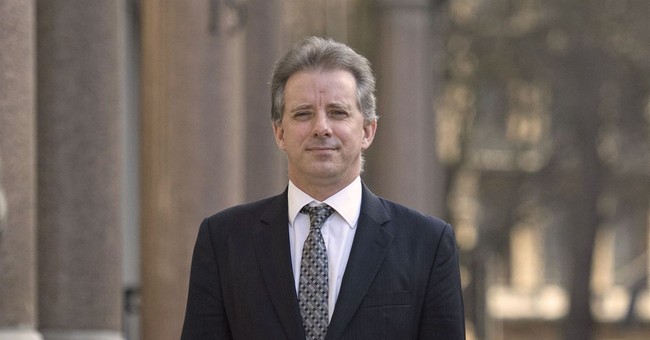 FILE – This Tuesday, March 7, 2017 file photo shows Christopher Steele, the former MI6 agent who set up Orbis Business Intelligence and compiled a dossier on Donald Trump, in London. No one has painted a more vivid or lurid portrait of a purported alliance between Trump’s presidential campaign and Russia than Steele. (Victoria Jones/PA via AP)

One of the areas of my commentary that has aged particularly well has been my assessment of how the FISA process was used to spy upon the Trump campaign and the Trump transition team, how Carter Page was falsely targeted, and how, more likely than not, the Steele Dossier was actually a Russian disinformation product rather than mere opposition research. I’m going to quote at length from my February 2018 post, The Steele Memo Is Much More Likely Russian Dezinformatsiya Than It is Intelligence. Keep in mind this was written at a time when the prevailing wisdom on this site was that if Trump was not actually Hitler he was a Putin stooge and it was just a matter of time until ‘Mueller Time’ took place and drove #OrangeManBad from office.

The other night I went through the dossier and compiled the list of sources used by Steele:

Source D: close associate of Trump who managed his trips to Russia

Source E: seems to be someone in the Trump organization

Kremlin official involved in US relations

Compatriot of two well-placed sources, one business/political elite and one in services/tourism

Keep in mind that Steele did not talk to any of these people so his credibility, good or bad, is not useful in evaluating the claims. The best you can say is that Steele is truthfully reporting what he was told and that presumption is tenuous based on Steele’s known statements of antipathy towards Trump. Steele deals with emissaries, paid emissaries to be exact, and they, in turn, are reporting back from conversations they allegedly had with people in Russia. In many cases, the sources quoted has no personal knowledge of events but is reporting what someone else told him (i.e., Russian source close to Rosneft President Igor Sechin). We have no way of knowing the credibility of either the emissaries or the sources. In no case do we know the sources actually exist. In many cases, we don’t know that the sources relied upon are real. Telling Steele about a conversation you never had, and getting paid for it, beats the living hell out of ending up in a Lubyanka basement cell.

We don’t know who the sources are but what we do know is that the FSB would probably call this activity “espionage.” The question then becomes did the emissary disclose what they are doing to the source, to immunize themselves from prosecution, and therefore the source and maybe the source’s source knows that this is part of research on Donald Trump by someone who doesn’t want him elected.

The bottom line here is that it is improbable, verging on the impossible, that anyone could have interviewed or queried current or former Russian intelligence officers about the activities of a candidate for the presidency of the United States and not drawn the attention of the FSB and SVR as surely as poo draws flies.

Thanks to the efforts of Senators Chuck Grassley and Ron Johnson, we now know that was true:

Two Russian intelligence operatives were aware as early as July 2016 that former British spy Christopher Steele was investigating Donald Trump, according to newly declassified information in footnotes from a Justice Department report on FBI surveillance of the Trump campaign.

Footnotes from that report also said a member of the FBI’s Crossfire Hurricane team investigating the Trump campaign received evidence in January 2017 that Russian intelligence might have targeted and collected information on Steele’s firm, Orbis Business Intelligence.

The footnotes, released by Sens. Chuck Grassley and Ron Johnson on Wednesday, provide further indications that Russian operatives fed disinformation to Steele that ended up in his infamous anti-Trump dossier.

A Justice Department inspector general’s report laid out a series of “significant”errors and omissions that the FBI made in its applications to spy on Page. Many of those errors involved failures to disclose evidence that undercut Steele’s allegations of a “well-developed conspiracy of cooperation” between the Trump campaign and Russia.

The footnotes declassified on Wednesday say that in late January 2017, an investigator on the Crossfire Hurricane team received information that Russian intelligence “may have targeted Orbis” and researched the company.

“…The report noted that Steele’s contact with 5 Russian oligarchs in a short period of time was unusual and recommended that a validation review be completed on Steele because of this activity,” the footnote says” (2/2)

Consider that. Russian oligarchs who were supplying information to Steele were also in direct contact with the FBI. The FBI was sufficiently suspicious of Steele’s contacts with the Russian oligarchy that they considered reviewing his reliability.

The FBI was not duped, they knew they about Steele’s sources and were willing co-conspirators to launder his Russian disinformation to the FISA court.