I would have never authorized this search warrant to go to a federal judge for approval in any investigation of the January 6 protesters.

Search warrant applications are not required to be perfect, and the facts set forth by the FBI Agent in the affidavit do not need to show evidence of guilt beyond a reasonable doubt by the persons involved.

But there are some basic standards for seeking a search warrant, and it is the job of the federal prosecutor to make sure those standards are met in evaluating the substance and conclusions reflected in the search warrant application before it goes to a judge to sign.  The affidavit submitted in support of the application to search the Homer, Alaska home of Paul and Marilyn Hueper failed to meet those standards.

But, the application is probably sufficient to avoid any potential civil liability on the part of the government for almost certainly having searched the home of two people who had nothing to do with the crime under investigation — the theft of Nancy Pelosi’s laptop on January 6.  It is likely minimally sufficient in that regard, and the DOJ officials are saved to some degree by the fact that a Federal Magistrate in Alaska did, in the end, sign the warrant.  It is humorous to me that the name of the Magistrate is redacted for no reason that I can discern other than as an effort by DOJ to prevent antagonizing the Magistrate after having suckered him/her into signing this ill-advised warrant based on the dubious claims and conclusions.

The first problem with the warrant is that even though it was drafted in mid-April, 2021, it nevertheless spends the first 15 pages of a 31-page affidavit covering the events of January 6, and includes several stock photos of events that day that had nothing to do with the theft of Pelosi’s laptop. While there might be a reason to include this information to establish that criminal activity did occur on that day in that location, there was no need to spend 15 pages explaining what had happened more than three months after the fact.

The affidavit then turns to “Facts Specific to This Application.” at the top of page 16.  But the first “fact” set forth is that Paul and Marilyn Hueper were identified as “non-compliant” passengers with Alaska Airlines — on FEBRUARY 17, 2021.

That happens to be 42 days after Nancy Pelosi’s laptop was taken from her office.  So there is that…

There is a tangential relevance in this respect: Though the name and title of the person are redacted, it seems clear that a security official with Alaska Airlines was doing a follow-up investigation into whatever was the incident that took place on February 17 involving the Huepers.  That person is identified in the affidavit only as “Witness 1.”  Witness 1 reports to the FBI that in looking at the Instagram Account of Paul Hueper — publicly available knowing Hueper’s name — Witness 1 saw photographs of Marilyn Hueper.  Witness 1 then compared the pictures from the Instagram account to photos published by the FBI of various unknown subjects who may have committed criminal acts inside the Capitol on January 6.  I’m only guessing the reason Witness 1 did that was because he/she would have known from travel records that the Huepers had returned to Alaska from Washington DC on or after January 6.

Witness 1 told the FBI that photos of a caucasian female identified as 225A and 225B, “resembled Marilyn Hueper.”  But the “resemblance” is then qualified by saying it was based on “matching the exact description of Hueper dressed in the same clothing and purse from Paul Hueper’s Instagram posts.”  Photos 225A and B show a woman walking inside the Capitol wearing a long down-type winter coat, with a sweater underneath that had a large “snowflake” print pattern.

The affidavit then attaches a photograph from Paul Hueper’s Instagram account showing Marilyn Hueper behind a crowd of people walking up some steps, with the Capitol Building still a distance away in the background.  But this photo only captures Marilyn Hueper from behind, showing only that she was wearing a long dark down-type jacket. It shows nothing other than the back of her head and the jacket — not her face and not the distinctive sweater worn by the woman in 225A and 225B.

The affidavit then makes the baseless factual leap that Marilyn Hueper — referring to her by name repeatedly — entered the Capitol along with other protesters.  These allegations are based on another FBI agent’s review of video and photos, both from surveillance cameras and cell phone video posted on social media, which tracked the movements of the woman shown depicted in 225A and 225B.  The affidavit, using far from distinct images of that same woman, states numerous times over the next several pages that “Marilyn Hueper” was at various locations inside the Capitol, including inside Nancy Pelosi’s office, and that Marilyn Hueper’s hand can be seen disconnecting wires attached to the laptop on Pelosi’s desk.

But up to this point, the affidavit has not claimed that the woman is 225A and 225B is Marilyn Hueper based on a facial resemblance of that person to a photograph of Marilyn Hueper.

Paul Hueper had posted another picture of his wife on his Instagram account from earlier in the day on January 6.  In that photo, she is wearing a black face mask, but you can see part of the outfit she was wearing under her black coat. 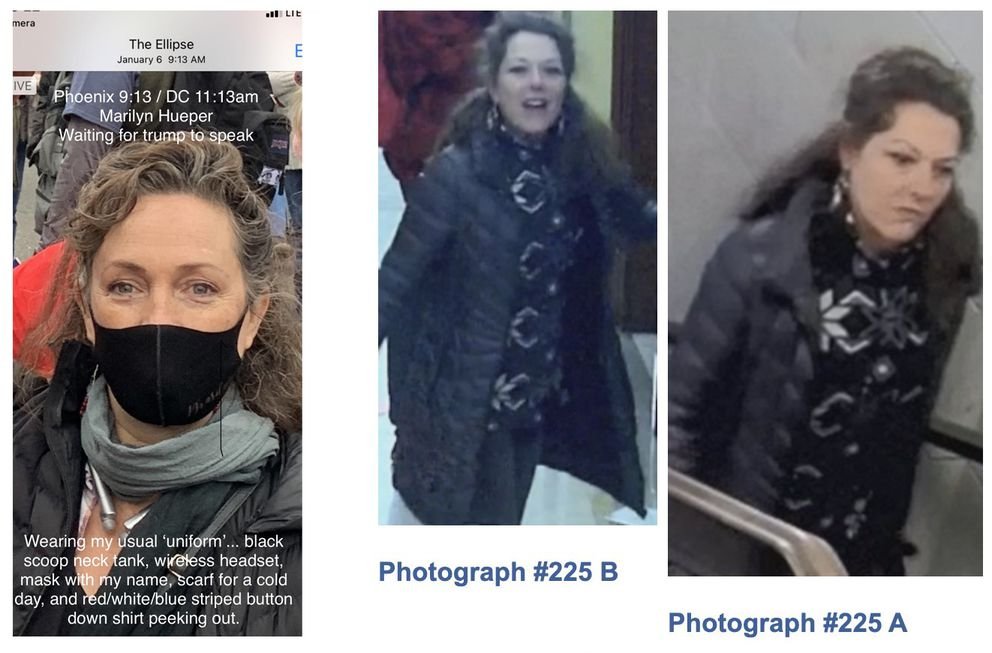 She is not wearing a dark sweater with a snowflake pattern.  She has on a “v-neck” blouse of some kind and a gray scarf loosely around her neck.  Compare that to the snowflake sweater worn by the woman in 225A and 225B that comes up higher on her almost like a turtleneck.

In addition, Hueper is not wearing earrings in the Instagram photo, but you can see dangling earrings being worn by the woman in 225A and 225B.

Finally, in paragraph 46, on page 24 of the 31-page affidavit, the Agent states that the FBI obtained a copy of Marilyn Hueper’s Driver’s License Photograph, and “confirmed” the woman shown in 225A and 225B was Marilyn Hueper.

In paragraph 50, the affidavit states that a third person, who knows Marilyn Hueper, confirmed to the FBI that Hueper is the individual shown in 225A and 225B.

Those final two references, at the very end of the “probable cause” section of the affidavit, probably save this from being an “unreasonable” search based on an insufficient warrant for Fourth Amendment purposes.

But that doesn’t change the fact that the FBI had photos of Marilyn Hueper taken that day and posted on her husband’s Instagram account, and those photos showed significant inconsistencies with the claim that Hueper is the woman in 225A and 225B. The most obvious glaring problem is that Hueper is not wearing the very distinctive sweater under the long coat that can clearly be seen on the woman in 225A and 225B whose movements were tracked around the Capitol.

That woman in 225A and 225B is not Marilyn Hueper, and the FBI had evidence in its possession establishing that the photo identification made by comparing her Driver’s License photo, and by Witness 2, were both erroneous.

It was the FBI’s job to recognize that problem and to not go forward with the search of the Hueper’s home.

This was more than simply a mistake.  This was another example of the overzealous nature of the DOJ’s handling of all things connected to the protests on January 6.