On December 6, 2015, Joe Biden ordered Ukraine President Petr Poroshenko to fire Ukraine Prosecutor General Viktor Shokin, threatening to withhold $1 billion in US aid to the Poroshenko government if he did not do so.

Newly revealed evidence taken from Hunter Biden’s laptop, in the form of an email dated November 2, 2015, from Vadym Pozharskyi to Devon Archer and Hunter Biden at their Rosemont Seneca Partners email addresses shows, unequivocally, that Burisma’s purpose in placing them both on the Board of Directors, and hiring Blue Star Strategies, a Washington DC PR firm, in November 2015, was to influence United States and Ukrainian government policies for the benefit of Burisma and its exiled owner, Nikolay Zlochevskyi.  It was Zlochevskyi, a Ukraine oligarch, who was paying Archer and Biden a reported $83,000 a month — each — to serve on the Bursima Board.

This memorandum was referenced by Tucker Carlson the night of the NY Post story on Biden’s laptop, but an image of the email only found its way online today.

Pozharskyi’s email came 11 months after a UK Court released $23 million in funds that had been frozen in a bank account in London.  A three-day court hearing took place 8 months later, in December 2014, and on January 21, 2015, the UK Court ordered the funds released, and Burisma had the money transferred to a Cyprus bank account.

Media accounts of this episode have engaged in revisionist history in order to cast blame for the failed effort in the UK Court on Shokin, claiming his failure to cooperate by providing necessary documents to the UK Court was the reason for the downfall which eventually led to the release the funds. But the timeline shows that Shokin had not yet been appointed Prosecutor General in the fall of 2014 when the matter was pending before the UK Court, and had no responsibility for the failure to recover the money in the London account.

At the time of the November email, Burisman’s owner Zlochevskyi was in exile in Russia, fearing his arrest and prosecution by the government of Petr Poroshenko.  He fled to Russia in 1994 while the matter was pending in the UK Court. Poroshenko had become President in June 2014 following the Orange Revolution earlier that year.  Zlochevskyi had been a government minister in the prior administration which was toppled by the Orange Revolution, with the support of the Obama Administration, and the allegations against him were that his company obtained contracts to access Ukraine natural gas resources due to his corrupt influence as Minister. .

Yesterday the FBI sent a letter to Congress stating that it had nothing to add to the statement issued by DNI John Ratcliffe earlier in the week that Hunter Biden’s laptop, and the material found on it, was not the result of a Russian intelligence/disinformation operation.  No one on behalf of Hunter Biden, Joe Biden, or the Biden Campaign has made a definitive denial as to the authenticity of the contents of the laptop that have been made public.

So at this point there is no basis to suspect that the email communications found on the hard drive of the laptop are not authentic.

It is important to understand the sequence of events surrounding the Nov. 2 email.  While Burisma had regained control of the $23 million that had been frozen, Zlochevskyi remained in Russia, unable to return to Ukraine as he feared being arrested by the Petrosehnko government.  Open investigations remained open against him, at that time under the authority of Shokin, who became Prosecutor General in February 2015.

On the recommendation of Biden and Archer, Burisma began discussions with Blue Star Strategies to retain the company do help with “PR” work on its behalf with the Ukraine and US governments.  That contract was eventually signed in mid-November.  The November 2, 2015 email is important because it plainly states what it is that Burisma expects to get for the money is its going to pay Blue Star — and for the money, it had been paying Biden and Archer.

Pozharskyi email is set forth below: 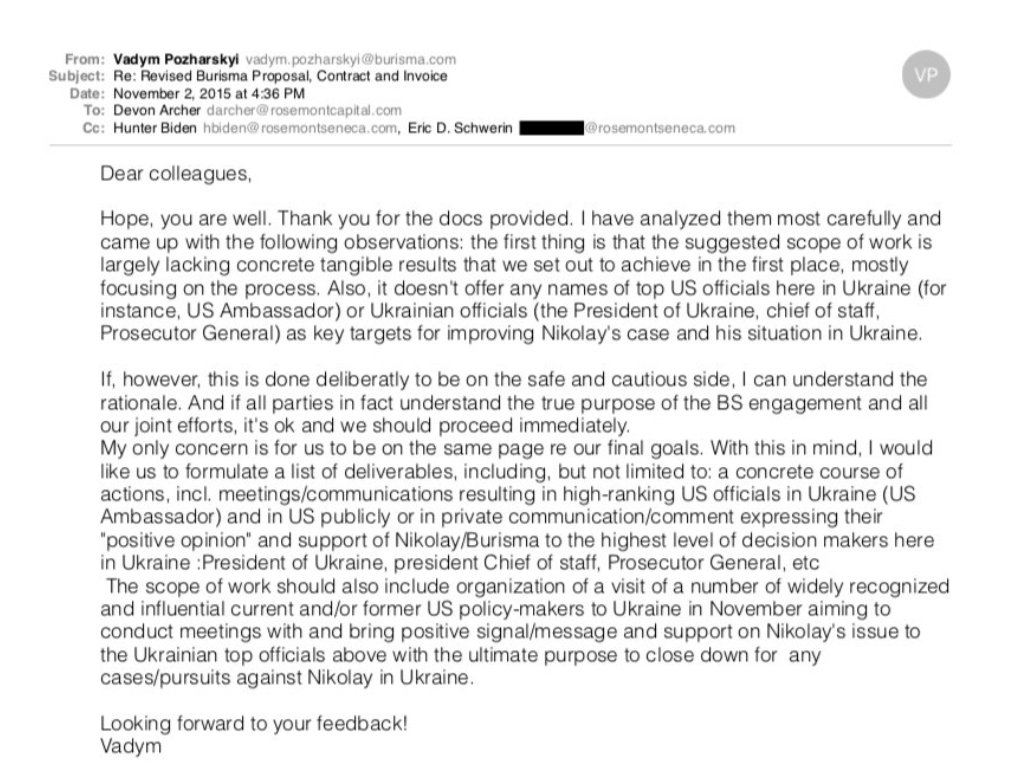 Blue Star Strategies was founded by two veterans of the Clinton Administration, one of whom was Karen Tramontano, a Deputy White House Chief of Staff.

Blue Start Strategies coordinated its efforts on Burisma’s behalf with John Buretta, an attorney in New York with Cravath, Swaine & Moore, who had assisted Burisma’s UK attorneys in getting the $23 million released.

Buretta had been the No. 2 official in the Criminal Division of the Obama Administration DOJ up until 2014 when he left to join Cravath.

Joe Biden’s visited Ukraine on December 6, 2015, a Sunday.  On December 2, the Thursday before he departed, Tramontano participated in a conference call among Obama Administration officials finalizing the agenda for Biden’s visit to Ukraine coming up in just four days, and the policy issues that were going to be addressed there.

Burisma’s interest could not be more plainly stated by Pozharskyi, Burisma’s No. 3 official,l with respect to what Burisma wanted from its hiring of Blue Star.  Burisma wanted to have a “list of deliverables” agreed upon, but understood why it might be problematic to put those in a contract agreement with “BS” — Blue Star.  Burisma wanted meetings/communications with “high-ranking US Officials in Ukraine,” have the “US publicly or in private communications/comment expressing their “positive opinion” in support of Nikolay/Burisma….” and wanted that made to the highest level of decision-makers in Ukraine — the President, Chief of Staff, and Prosecutor General.

The “ultimate purpose was to close down for any cases/pursuits against Nikolay in Ukraine.”

Burisma wanted the Obama Administration — “How about Joe Biden?” — intervene to shut down the investigations of Zlochevskyi.

Think about that request in the context of all the claims that Shokin needed to be fired because of his failure to crack down on oligarchs, and prosecute persons like Zlochevskyi.

If the Prosecutor General who was fired based on the demands of Joe Biden was “corrupt” due to not aggressively pursuing Burisma/Zlochevskyi, why would Burisma want their agreement with Blue Star to specifically address the issue of getting the investigations stopped?

According to Biden and others who supported the firing, there were no investigations and that’s why the Shokin needed to be replaced by someone who would.

That was not Burisma’s view, as the email makes clear.  Burisma wanted Shokin’s investigations stopped — and Joe Biden did that on December 7 when he demanded that Shokin be fired.

Burisma’s attorney, John Buretta, was able to meet with the Prosecutor General who replaced Shokin, and convinced him to drop the investigations of Zlochevskyi by resolving some tax issues.  And with that, Zlochevskyi was able to return to Ukraine in 2018.  Buretta said as much in an interview in February 2017:

A:  I met with numerous PGO personnel, including Prosecutor General Lutsenko. I conveyed that Mr. Zlochevskyi had provided voluminous evidence to the PGO with respect to his assets, that a U.K. court had also analyzed a large volume of evidence and found no reasonable basis to conclude that there had been any wrongdoing, expressed Mr. Zlochevskyi’s willingness to cooperate with Ukranian authorities and noted that the PGO had presented no evidence of wrongdoing by Mr. Zlochevskyi. I took the same approach on this matter that I would take on a similar matter before any law enforcement authority or court.

Yuriy Lutsenko replaced Viktor Shokin — fired on the demand of Joe Biden — as the Prosecutor General.

It’s great when a plan comes together, AND everyone gets paid — including Hunter and Joe.

Bill Maher Knows Where Progressives Are Going to Blow It on Abortion
Townhall
Blue-check professor asks if the alleged attack on Rudy Giuliani today really qualifies as an 'attack'
Twitchy
'Meet the Press' Panelists Mock Peggy Noonan for Comments on 'Roe' and the GOP — but She's Right
Redstate
Astonishing Testimony From Dr. Birx Lost Amid Landmark SCOTUS Rulings
PJ Media