So BLM-Los Angeles and Antifa decided to flex some muscle today and show everyone else how it’s done.

Here was the invitation to the dance. 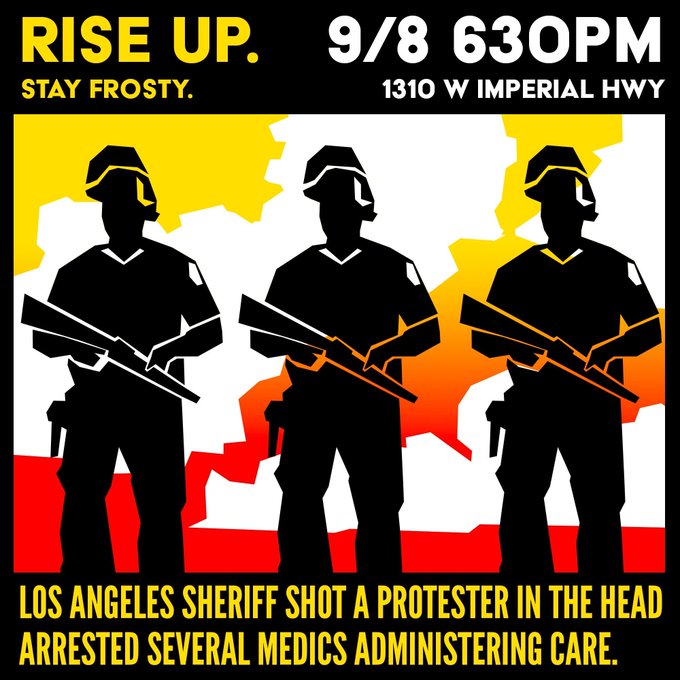 They did bring a new dimension to the efforts to antagonize — I think — the law enforcement officers.

I wonder if her parents recognize her.

And then there was this on the other end of the spectrum — again, send the kiddies in the other room.

LA protester to Sheriff’s: An extremely distressed protester can be seen here spewing vile rhetoric to police expressing her desire for sheriffs to eat a large penis with herpes pic.twitter.com/5WlIRL4mdG

Here is the LASO giving warnings and instructions to those assembled to leave the area.

Multiple warnings were given to disperse beginning at 8:10pm pst

Protesters here at the South LA Sheriff’s station chanting: “Every city, every town, burn the precincts to the ground.”
Also chanting all cops are bastards, pigs, Fu*k 12, calling deputies “pussies”, and chanting “no cops, no prisons, total abolition.” @FOXLA pic.twitter.com/zOm536Fm5B

[For those of you not in the West, El Pollo Loco is what all fast food chicken should aspire to be.]

For those who were curious enough about the “or else” part, here is what they saw.

BREAKING FROM SOUTH LA: Something escalated and LASD just cleared out all protesters with pepper balls and flash bangs as protesters have been throwing water bottles at them. @FOXLA pic.twitter.com/58SMAvRmVk

LA sheriffs not holding back firing non lethal munitions even into residential neighborhoods that protesters were fleeing into pic.twitter.com/gllF37McZe

BREAKING: LA sheriffs move in to make an arrest on an Antifa militant and open fire with non lethal munitions after an unlawful assembly was called pic.twitter.com/oLpVfO4rgZ

Note the fact that it was 8:10 when LASO had seen enough and moved in to put a stop to it all.  No late-night shifts for those guys — they got other plans.