Thanks to the obscene over-officiousness of the Barack Obama Administration, we have spent much of our time the less decade or so discussing the incredible damage the federal government can do – and was doing – to…everything.

Obama’s outsized over-officiousness – certainly warranted the outsized extra attention.  Because his one-size-fits-none government impositions – left no room for anyone anywhere to breathe.  Let alone actually engage in any sort of commerce.

We are now thankfully enjoying the much-less-federal-government Donald Trump Administration.  Trump has been slashing regulations – including many major impositions imposed by his predecessor.

One such inherited dumbness undone – was Obama’s unilateral power grab of the entirety of the Internet.  Under the guise of the very stupid Network Neutrality, Obama imposed 1934 monopoly landline phone law…upon the World Wide Web.

This made zero technological sense – let alone any sense of the economic variety.  So Trump rightly, reasonably undid it.

As dumb as Net Neutrality is – if you’re going to insist upon its imposition, it should be done at the federal level.  It is, after all, a WORLD Wide Web:

“Where every second of every minute of every hour of every day – trillions of electronic bits are criss-crossing city, municipality, state and international borders….

“Thus, the WORLD Wide Web is clearly a federal government issue.  The Feds determine our nation’s Internet policy.  And then The Feds negotiate Internet interactions with other nations.”

Which means the Constitution’s Commerce Clause kicks in:

“The Commerce Clause is in the Constitution – as a DE-regulatory insertion.  As in…a less government clause.  In keeping with the document’s overarching less government theme.

“The Founding Fathers didn’t want the state governments imposing impediments to commerce between the states. 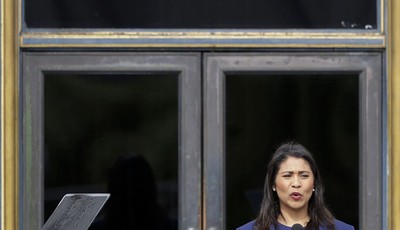 Which means things like this should never be done by our nation’s sub-federal governments:

“‘This will be the most comprehensive and the strongest net neutrality protection in the United States, where we are restoring what we lost when Donald Trump’s FCC obliterated net neutrality,’ (Democrat state Senator Scott) Wiener told reporters….”

“Radical California’s Net Neutrality imposition upon the Internet – is a clear and violent violation of both the letter and the spirit of the Commerce Clause.

“For instance: Next-door-to-California Nevada – is a MUCH less government state.   There is just about no way they will impose anywhere near this level or type of Internet imposition.”

California is therefore quite obviously imposing impediments to commerce between the states.  They should be stopped.

And lost in all of this inter-government shuffle?  The incredible power local governments have over how good – or bad – our Internet will be.

Cities and counties – hold the lifelines of our Internet literally in their grabby, money-grubbing hands.

Local governments control the right-of-ways – which Internet Service Providers (ISPs) must use.

Local governments control the poles – to which ISPs must attach.

And for far too long, far too many of these municipalities have abused the living daylight out of this power:

“Local governments and their public utilities charge ISPs far more (for building rights) than these things actually cost. For example, rights of way and pole attachments fees can double the cost of network construction….

“These (government) incumbents – the real monopolists – also have the final say on whether an ISP can build a network. They determine what hoops an ISP must jump through to get approval.

“This reduces the number of potential competitors who can profitably deploy service.… The lack of competition makes it easier for local governments and utilities to charge more for rights of way and pole attachments.

“How bad does it get?

“Video franchises are the revenue-sharing agreements that cable TV companies sign with local governments in return for the exclusive right to offer video services to customers.

“Get that?  It’s the government creating the monopolies – not the (very un-free) market.”

And we’re on the verge of starting to deploy Fifth Generation wireless – 5G.  The “Internet of Things.”  Which will massively expand the Internet, our economy – and ISPs’ relationships with local governments.

The old cellular towers – were huge monstrosities that took up massive space.  But they threw signals very long distances – which meant you didn’t need to site quite so many.

5G “towers” – are barely bigger than pizza boxes.  But to handle the exponentially increased signal density the 5G Internet of Things will create – you must site a whole lot of these pizza boxes.

The very obvious good news is – they are but a tiny fraction of the pain in the keister the old school towers are.  A crew can attach a pizza box to a pole – in just a couple of hours.  No fuss – no muss.

The bad news is – again, you need to attach a LOT of pizza boxes to a LOT of poles.

And, of course, local governments are looking at this – as a pole-attachment-fee gold mine.  It’s like those old school cartoons: Imagine millions of bureaucrats nationwide – all with dollar signs for eyes.

It is eminently reasonable to say that these 10,000 or so municipalities imposing varying degrees of too-much-government upon the US’s Internet buildout – is also a violation of the Constitution’s Commerce Clause.

Because they will be imposing all sorts of impediments to commerce between the states.

Thankfully, the US Congress is trying to address this.  Proffering federal legislation – to streamline these local processes.

“The Streamlining The Rapid Evolution And Modernization of Leading-edge Infrastructure Necessary to Enhance Small Cell Deployment Act (or STREAMLINE Small Cell Deployment Act) (S 3157) would impose deadlines for state and local action on small cell applications and include a ‘deemed granted’ remedy sought by the wireless industry if deadlines were missed. It also would impose restrictions on the fees that states and localities can charge for processing applications or using the rights of way.”

In fact, those reforms should be passed for every aspect of Internet deployment: Wired, wireless, satellite – whatever.

And also for anything else Commerce-Clause-eligible – subject to these local shakedowns.

The national economy – and thereby your wallet – will be most appreciative.

Biden Opening Another Migrant Facility For Kids in Florida, Here's What Kamala Harris Said About It in 2019
Nick Arama

Obama Starts a Podcast, Drops the Bomb of Why He Never Pursued Reparations for Slavery
Alex Parker