The Cost of Political Pseudo-Science Shown In Two Examples.

Surely it’s time for climate-change deniers to have their opinions forcibly tattooed on their bodies.

Richard Glover and Dr. Donald Brown are two very different men, in different nations, who work towards a common goal. Each man believes that human pollution has driven a series of chemical and physical changes in the Earth’s atmosphere. Each man believes this will damage the world around us and must be fought. Neither man has any ability to objectively prove their belief. Neither man will let that lack of knowledge stand in the way of enforcing their views upon others. Both men indulge in unethical behavior that demonstrates yet another cost that pseudo-science imposes on modern society.

Richard Glover writes opinion pieces for The National Times, a newspaper published in Australia. Climate change has been a major agenda item with the Australian Left which has been in power in The Australian Parliament for the last few years. Current Prime Minister Julia Gillard is attempting to impose a carbon tax to restrict CO2 emissions. Glover apparently supports “Lady Galadriel’s” approach to the issue. Thus we can treated to disingenuous passages such as the one presented below.

Facts that don’t fit one’s world view can be difficult to see. Consider the way the left spent decades ignoring the horrors of Soviet communism, horrors that were obvious to anyone who cared to look from at least the early 1930s….Now it’s the right’s turn to face up to a similar uncomfortable, ideology-challenging moment. Hopefully, they’ll do it a bit quicker than was managed by the left.

Dr. Donald Brown teaches at Penn State University and is also attempting to drum up support for anti-global warming hysteria. He is at a different point in the advocacy effort than Greens are in Australia. The United States Senate has recently defeated the Greens on both the Warner-Lieberman, and the McCain-Lieberman Bills. These were efforts to enact a Cap and Trade program of the type that The US House of Representatives passed in The Waxman-Markey Act in 2009.

Thus, Dr. Brown is attempting to rebuild consensus behind efforts to regulate carbon in the United States. He thus wants to attribute every bad thing that happens with US weather to “Climate Change” and anthropogenic pollutants. Thus he tells us quite fatuously that he has an ethical responsibility to warn us about the currently unproven link between AGW and tornadoes.

The outbreak of recent killer weather events including US tornadoes hitting Joplin, Missouri and Tuscaloosa, Alabama has everyone asking whether there is a link between tornadoes and human-induced climate change….This post argues that ethics requires acknowledging the links between tornadoes and climate change despite scientific uncertainties about increased frequency and intensity of tornadoes in a warming world. However, because there are also scientific reasons to doubt that tornado propagation and intensity will increase in a warming world, as we shall see, care is necessary about how we should discuss these risks.

But since Dr. Brown has been kind enough to express his concern, we’ll acknowledge the risk that AGW is causing more tornadoes by actually examining some data. We’ll take a nice, happy, ethical look at some work Dr. Roy Spencer has done to quantify changes in both The Median Earth Temperature and the occurrence of tornadic thunderstorms over the last few decades.

Spencer gives us a graph of temperatures from 1950 to 2010 that shows an increase of about 1.8 degrees centigrade over 60 years for a DT/dt = 0.03 Degrees Centigrade per year. He then presents a chart documenting a decreasing trend that shown US F3 to F5 tornadoes dropping from 43 to 27 in a fairly consistent linear progression. This gives us a DN/dt = -0.267 F3 to F5 tornadoes per year.

Dividing DN/dt by DT/dt gives us a rough proxy for what a slowly rising temperature has given us in terms of increasing or decreasing tornadic activity. This calculation results in DN/DT = -8.89. Thus, for every one degree Centigrade of warming we experience, we’ve got a set of US data suggesting that we will lose 9 F3 to F5 tornadoes. Thanks for the warning, Dr. Brown. I hope this discussion has left you feeling extra-special ethical.

What all of this nonsense, both from Australia and America, shows us is that the faith-based pseudo-science of the environmental movement has deleterious impacts on both the decency and intellectual abilities of Modern Western Culture. Who else, other than a deracinated, Leftist Whack-Job, could possibly get away with suggesting that everybody who disagrees with him be forcibly tattooed, with their heretical beliefs, to be borne with eternal shame like Nathanial Hawthorne’s Scarlett letter? Who else, other than a fraudulent political academic, would suggest that his unproven scientific conjectures have to be a focal point of discussions out of some ethical responsibility?

Nobody with an honest outlook on life would be as fatuously and conceitedly obnoxious as these two individuals. Nobody willing to concede that Truth and personal belief could at times diverge would push such chicanery. Richard Glover and Dr. Donald Brown are different men from different circles. However, each is a living exemplar of the fraud and iniquity that Left-Wing activism has inflicted upon modern society. Each, in his own disgusting way, gives us another example of what environmental pseudo-science is costing Western Civilization. 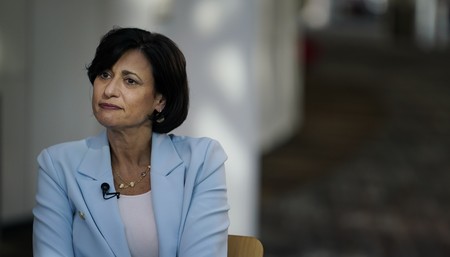 The CDC Officially Moves the Goalposts on COVID-19 Vaccination
Bonchie

What Could Possibly Go Wrong? The IRS Will Soon Require a Face Scan to Access Your Tax Records
Mike Miller

The Church of COVID Comes for Ron DeSantis
Bonchie