In perhaps the least shocking sports news of the year, the NFL has announced it will allow players to choose from six different social justice phrases to wear on the back of their helmets for the 2021 season.

It’s least shocking because commissioner Roger Goodell’s prostration before the Black Lives Matter altar in 2020 was an embarrassment to professional sports. Toss in Goodell’s incessant blathering about former San Francisco Giants quarterback Colin Kaepernick, and the commish was downright sickening.

The league will allow players to choose from the six following phrases, as reported by Fox News:

Teams will also be allowed to emblazon “It Takes All of Us” and “End Racism” in their end zones.

The NFL announced Thursday it will once

again use the phrases “It Takes All of Us” and “End Racism” in the back of end zones throughout the 2021 season, and

Warms the cockles of your heart, right? That, or makes your eyes roll back into your skull.

As if that wasn’t enough, as reported by Fox News, the league will also dedicate weeks 17 and 18 to the “Say Their Stories” campaign, which they rolled out last season. The messaging will include “social justice heroes” who have been personally identified by players for their impact in that area.

We are committed to Inspire Change and the social justice work that inspires change for the long-term.

Uh-huh. What Roger Goodell and his league are committed to is protecting their brand — and cash flow.

Isaacson was all over it:

That will provide a unified time frame for us to further amplify all of the work that our clubs are doing and that will lead into the playoffs where ‘Inspire Change’ will continue to take center stage. The key message for us as the season is starting, we are ramping up again in a big way with our social justice work.

During the final two weeks of the season, all teams will receive the “relevant pieces” to go with the “Say Their Stories” campaign.

Oh — I almost forgot. The NFL will also bring back the so-called “Black national anthem” in the 2021 season. “Lift Every Voice and Sing” was played before the start of Week 1 games during the 2020 NFL season and was prominent during the Super Bowl and the NFL Draft.

As reported by NBC prior to the 2020 NFL season, Black fans called the plan a joke, placating, pandering, and worse. Said one fan:

You can play ‘Lift Every Voice’ as much as you want, but it will not put a dime in anyone’s bank account… That song will not change anything.

Yet, as noted by Fox News, the NFL wants to make the song a “prominent part of big-league events.”

And these people wonder why the league’s ratings continue to swirl down the toilet.

Got Hypocrisy? Biden Works to Protect Tajikistan’s Border With Afghanistan, as Illegals Stream Into US

Biden to Go Back on Vacation, as Even His Own People Are Horrified Americans Left Behind 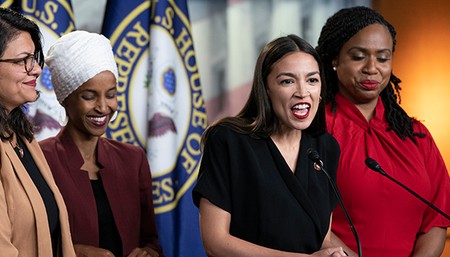