Hilarious: Yellowstone Reporter Gets Too Close to Bison, "NOPE"s His Way Right Out of There 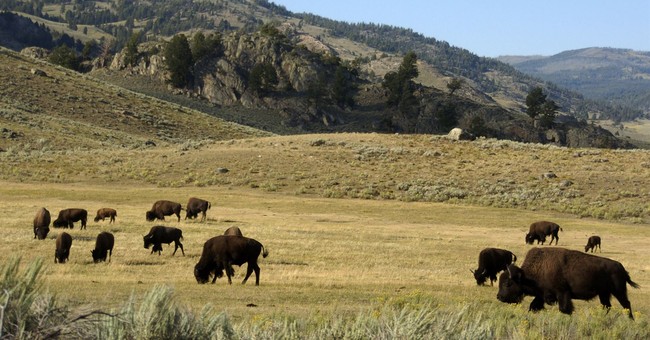 FILE – In this Aug. 3, 2016 photo, a herd of bison grazes in the Lamar Valley of Yellowstone National Park. An Oregon man who was caught on video harassing a bison in Yellowstone National Park has been arrested in Glacier National Park. The National Park Service says 55-year-old Raymond Reinke caused a disturbance Thursday, Aug. 2, 2018, in Many Glacier Hotel. Yellowstone rangers cited him later over the bison incident. Reinke had been cited for drunken and disorderly conduct in a third national park, Grand Teton, last Saturday and released on bond. (AP Photo/Matthew Brown, File)

Deion Braxton of NBC affiliate KTVM out of Montana was filming a report from Yellowstone park when he was rudely interrupted by some grazing visitors. His camera caught the hilarious encounter…or rather his hilarious (and totally relatable) reaction.

In a hilarious opening take, Braxton steadies himself to begin his report. When he notices a group of bison getting a little too close for comfort, the reporter “NOPE”s his way right out of frame, grabbing his camera.

It seems the Yellowstone bison didn’t get the memo on social distancing.

There’s a little bit of Deion Braxton in all of us, and it sure did feel good to laugh together at one man’s hilarious moment of terror. Thanks, Deion! And by the way, thank you for circling back and getting that footage of the bison. They are beautiful creatures.

Here's the video of the bison I shot once I got a safe distance away lol pic.twitter.com/uL3XiR2ISR