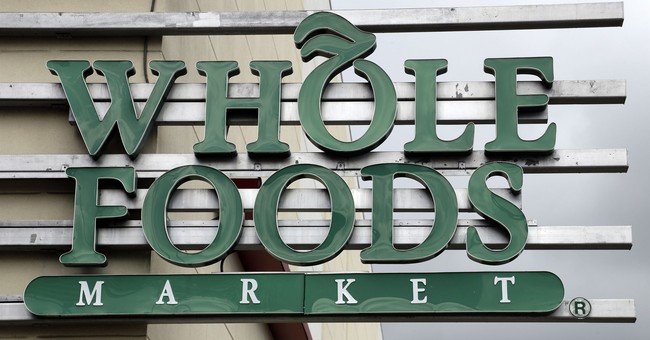 FILE – In this Monday, Aug. 28, 2017, file photo, a sign at a Whole Foods Market greets shoppers in Tampa, Fla. Amazon is bringing its Prime membership to Whole Foods, giving members special discounts and deals at the organic grocer. The new benefits will start Wednesday, May 16, 2018, at Whole Foods stores in Florida, and then rollout nationwide in the summer. Amazon declined to say if it plans to add the benefit to stores in Canada and the United Kingdom. (AP Photo/Chris O’Meara, File)

While public health officials are urging those who can work from home to do so, and for everyone to practice “social distancing,” or staying a minimum of six feet from other people while out in public, Whole Foods employees, who easily come in contact with more than 250 people a day and in close proximity, can only take unpaid time off or are allowed two weeks of paid time off if they test positive for the Wuhan flu.

On Wednesday, Whole Foods CEO John Mackey sent out an email to grocery store employees with a list of benefits and options for those who fall sick during the coronavirus pandemic.

Among his six suggestions was an option for employees to “donate” their paid time off (PTO) to coworkers facing medical emergencies.

In that same email, Whole Foods also said that it will offer unlimited, unpaid time off during the month of March and two weeks of paid time off for workers who test positive for Covid-19, the disease caused by the coronavirus—a policy announced this week for all Amazon employees and contractors that has also been adopted by tech companies like Uber, Lyft, and Instacart.

As expected, the policy has not been well received by employees. One employee, who wouldn’t give their name due to fear of retribution, says Whole Foods’ entire response to the pandemic has been inadequate and “selfish.”

“Considering [Whole Foods] is a billion dollar company, I think it is selfish asking the retail workers to figure it out within themselves. The response from [Whole Foods and Amazon] has been quite poor, being a front end cashier I feel like we are the most exposed to the situation…Some of us have sick family members [whose] immune system is weak and [it] could be quite dangerous if they catch this virus.”

While companies like Disney, a frequent target of labor organizers, are paying their theme park employees’ regular wages while the parks are closed down, Whole Foods is remaining open (as they should unless there is a compelling reason to close) but putting the burden on their lowest-paid employees instead of stepping up to the plate. Because of their response, employees who can’t afford to go without pay are encouraged to come to work while they’re sick or return to work earlier than they should.

It’s not unusual in large corporations for their employees to have the option of donating unused sick leave to their co-workers who suffer from chronic illness or are battling cancer, but for a global corporation such as Amazon/Whole Foods to “suggest” their lowest-paid employees donate their unused vacation time (which employees must be paid for when they leave employment in many states) instead of providing paid sick leave for the entire duration an employee needs it during this pandemic is disgusting and unconscionable.

Remember this the next time Jeff Bezos criticizes President Trump.