Congressman Maurice Hinchey, D-NY 22nd District, has a unique distinction, he is the regions number-one porker according to the Council for Citizens Against Government Waste which put Hinchey’s earmarks at $54.96 million. What makes Hinchey’s earmarks especially interesting is that $800,000 of the earmarked tax dollars may have gone for a sewer infrastructure project that will help the Partition Street Project, a project in which Hinchey has a financial interest. Another $100,000 of tax dollars went to the Bardavon 1869 Opera House a project that one of Hinchey’s Partition Street partners is involved with. 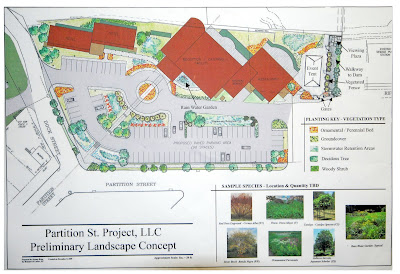 Hinchey also secured funding for infrastructure improvements along Kings Highway in 2006 and 2008 before the federal government purchased property there in November for the Army Reserve Center project from a group that includes John Mullen, a partner of Hinchey’s in the Partition Street Project. Hinchey says the grant was a response to a request from the town supervisor and the timing proves there was no direct connection to the Army Reserve Center project, which he said he did not know about before it was announced.

The Partition Street Project received final site plan approval last week from the village of Saugerties Planning Board. The project calls for a three-story, 30-room boutique hotel with a 400-seat catering hall, a 100-seat restaurant and 215 parking spaces on 7.8 acres near the center of the village. Related plans call for a hydroelectric plant to be built adjacent to the conference center on the Esopus Creek dam, which is owned by Leading Edge Developers. Mullen, a local contractor, is a partner in Leading Edge and a partner in the Partition Street Project.

…The funds will support engineering and the phased improvement and replacement of wastewater collection lines in the village, which are more than 100 years old and have been experiencing leaks and breaks. The project is central to the village’s commercial future, providing adequate wastewater service to more than 30 retail businesses, supporting vitally needed economic development.

The Village of Saugerties Sewer Department has identified three areas within the sanitary sewage collection system that are in need of rehabilitation or replacement: a portion of the original system runs under Route 9W from Barley Street south to Overbaugh Street; a second portion of the sanitary system on Route 9W or Partition Street (Main Street to bridge) is in the center of the business district of the Village of Saugerties; and a third major portion of the original system that needs repair extends from Myers Lane to West Bridge Street thru easements.

As you might expect Hinchey, says there is no connection between his official actions and the project and that he is not directly involved in the commercial development of the Partition Street property. Additionally, Hinchey’s chief of staff said the funding for the wastewater project would not deal with lines that connect to the Partition Street Project property, and, in fact, the commercial development will hook directly into the village’s wastewater treatment plant.

But wait, didn’t that June press release say something about overhauling the sewage system on Partition Street?  In October Hinchey sent out another press release about the project which gave the same description of the project.

Hinchey told the a local paper, the Daily Freeman that his only involvement in the planned Partition Street Project development is as a partial owner of the land. He said he owns a quarter of the land, while Thomas Struzzieri, executive director of the Horse Shows in the Sun equestrian operation in Saugerties, owns half, and Mullen, of J. Mullen and Sons, owns another quarter.

Struzzeri is the partner who is an adviser to the Opera that received $100,000 and Mullen own the land for which Hinchey secured the infrastructure improvements before it was sold to the Army.

Hinchey said although he lists the land as an asset on his congressional financial filings, he has no direct involvement in efforts to develop the property into a hotel and conference center.

He has no direct involvement? Hinchey may have had no role in planning the development, but it would be hard to believe that he had no idea how his investment was being developed.

Tom Struzzieri  (who owns 50%) said that Hinchey was involved with the project before him. He said Mullen approached him about being involved in the development as an investor. He and Mullen do a lot of business together and Mullen already had the property. Struzzieri said Hinchey also was a partial owner of the property when he was approached.

His investment was worth between $250,001 and $500,000 and Hinchey didn’t know how it was being developed.  He just so happened to decide to push for an $800,000 earmark the year before his partners were going to develop a property that was 25% his, what a surprise that turned out to be.

Jeff Lieberson, [Hinchey’s Chief of Staff] said  the press release could have been clearer because the money never was intended for the portion of the system that ran past the Partition Street Project site. He said the release was meant only to point out areas the village had identified as needing assistance. Lieberson also said the congressman’s office spoke with the village planner in January to clarify that the wastewater project would not touch the Partition Street Project property.

“It’s understood that it can’t serve that Partition Street Project,” Lieberson said. He also said the Partition Street Project would tie directly into the local pump station and not into the existing infrastructure. Additionally, Lieberson said it would cost more than $800,000 to address all the issues in the three areas of the village outlined in the October press release.

VILLAGE PLANNER Alex Wade said the congressman’s press release was wrong about the scope of work and that only one section — involving lines running way from Partition Street along the Esopus Creek to an area behind Price Chopper — was planned to be upgraded. He said village officials were surprised by the release, which incorrectly made it appear the whole $800,000 would be used to solve all three major problems.

But in a later statement Wade said said the village still could choose to use the money for the lines that run in front of the property co-owned by Hinchey, but had not intended to make that a priority even when the press release was issued.

Lieberson said on Tuesday that there were behind-the-scenes discussions to avoid the appearance of a conflict of interest with the Partition Street project. Village officials confirmed those talks.

“When the actual funds were approved, a request came from our office to make it clear that none of the funds could be used for that area,” Lieberson said. “There are some various options they have, and it was made clear that it would need to be used on something else. And that went through various conversations and communications between our office and the village planner.”

Lieberson said federal regulations require Hinchey to sign documents stating that any funding secured as a member of Congress would not provide a personal benefit. The Freeman on Wednesday requested a copy of that statement for the $800,000 intended for Saugerties infrastructure.

Wade, the village planner, said he knows of no written confirmation that the Partition Street Project would avoid a conflict of interest with the $800,000 grant by directly connecting to the pump station instead of lines along the highway. “I think it’s all verbal,” he said. “We were well aware from the start of the Partition Street Project, which started well after the request for funds for these trunk line repairs.”

Funny, two Hinchey press releases were issued saying that the sewer lines were going to run right past his Partition Street project, only after the press began snooping around was the story changed exclude his property On top of it all, the paperwork that Hinchey was required to file about the sewer project not being a conflict of interest was never sent to the village, “everything was verbal.” And don’t forget the federal dollars being used to help his two partners.

Even if all of these coincidences were totally innocent, the fact that they exist shows that Congressman Hinchey has a total disregard for his constituents. Hinchey should have known that these deals smell like corruption and should have been avoided them at all costs.  Corrupt or not, Maurice Hinchey is an example of what is wrong with politics today.