‘That’s Not the Way to Win It’: Here’s Why Swing State Democrats Are Worried About Biden’s Chances of Winning 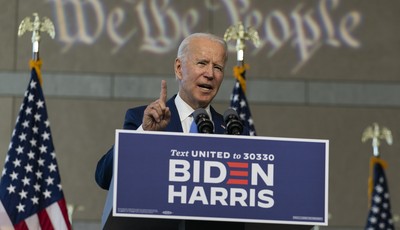 Democrats in battleground states are expressing some worries over former Vice President Joe Biden’s campaign. As November inches closer, Democrats are concerned that the candidate might not be campaigning in a way that will get him elected.

The Daily Caller reported that Democratic officials are not too happy with how Biden is running his campaign and fear that he may lose the election. They are taking issue with his low-key and subdued approach to campaigning.

Biden has conducted a rather low-energy campaign, citing concerns over COVID-19. Gilberto Hinojosa, chair of the Texas Democratic Party, told the Associated Press that bringing up the pandemic is a “pretty lame excuse.” He argued that engaging with voters in states like Arizona and Texas, which have a high Hispanic population, could bolster his chance of success in November. “I thought he had his own plane. He doesn’t have to sit with one space between another person on a commercial airline like I would,” he said.

Biden’s campaign has indicated that the lackluster campaign approach is designed to promote safety due to local health guidelines. “We are campaigning safely and effectively,” Biden spokesman TJ Ducklo explained. “Our message is reaching voters in battleground states and generating the enthusiasm and energy we need to beat Donald Trump.”

The Daily Caller reported that “Since Biden selected California Sen. Kamala Harris on Aug. 11 he has only traveled outside of Delaware 12 times, and has had 22 days with no public appearances.”

In contrast, President Trump has already restarted rallies and begun traveling all over the country. According to the Daily Caller, “he has made 24 trips to 17 different states over the same period.”

Collette Alston, the chair of a North Carolina African American Caucus expressed apprehension over Biden’s efforts to win voters in her state. “I do believe he can win North Carolina,” she told the AP. “Can he win it based on what he’s doing right now? No. That’s not the way to win it.”

President Trump is rightly exploiting the Biden campaign’s vapid strategy, contrasting it with his robust approach to winning voters. He recently called out the former Vice President’s calling a “lid” earlier in the week. “Did you see he did a lid this morning again?” Trump taunted on Thursday night during a rally in Florida. “So he does a lid all the time… I’m in Texas. I’m in Ohio. I’m in North Carolina, South Carolina. I’m in Michigan. I’m all over the place,” Trump added.

It seems amazing that Biden’s team believes his sleepy campaign is the way to win the election. But, perhaps they have no choice. With his obvious cognitive issues and inability to chain together more than three sentences without committing a gaffe, they might just be making do of an already difficult situation. Perhaps keeping him under wraps is more effective than actually letting him speak publicly.