Michigan Führer Whitmer Endeared Herself to Voters Again; Explains Why She May Have to Extend Stay-at-Home Orders 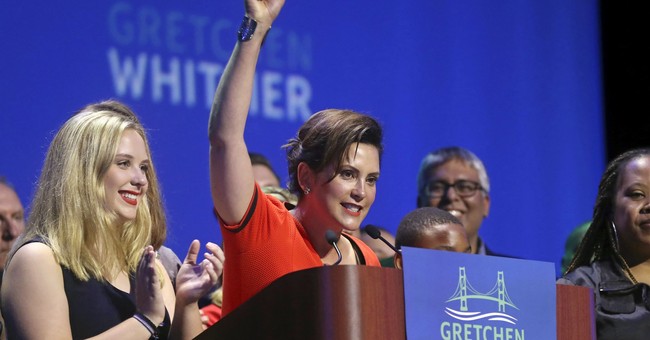 FILE – In this Aug. 7, 2018 file photo, Michigan Democratic gubernatorial candidate Gretchen Whitmer addresses her supporters in Detroit after winning the primary. Whitmer will face Republican Bill Schuette in November. She is focusing her campaign on cleaning up drinking water across the state, rebuilding roads and maintaining the expansion of Medicaid that provided health coverage to 663,000 lower-income adults. (AP Photo/Carlos Osorio, File)

Michigan Gov. Gretchen Whitmer discussed the protests which took place this week outside the Michigan Capitol Building with MSNBC’s Rachel Maddow last night. I suppose we should no longer be surprised at anything this woman says after the steady stream of random reports we’ve been hearing.

Hoping Joe Biden might choose her as a running mate, Whitmer has tried to raise her national profile. She first showed up on the radar after she accused the Trump Administration of blocking delivery of badly needed medical supplies to her state. This led to a public spat with President Trump. When it was determined that she had failed to file the proper paperwork, she was forced to walk her story back. No problem. Chuck Todd totally understood.

Next, in an effort to ingratiate herself to Democrats, she hopped aboard the #NeverHydroxychloroquine train. Her administration sent a letter to all physicians and pharmacists in the state warning of “professional consequences” if they prescribe or dispense hydroxychloroquine or chloroquine to treat coronavirus patients. Following a backlash from her constituents, she requested a supply of the drug from the government.

On Wednesday, the Michigan Conservative Coalition held a protest against Whitmer’s extension of the stay-at-home order through May 1, which is something that many governors across the country have done.

Unlike other governors, however, Whitmer’s order came with many unnecessary rules attached, hence the protest. For example, she had banned travel between residences. She allows exceptions for those taking care of an elderly relative or friend, “a pet, visiting a nursing home or similar facility, attending a funeral with no more than 10 people, or complying with a court order related to child custody.”

If a resident owns a vacation home that is located out of state, they are allowed to travel there. If, however, their vacation home is located within the state of Michigan, they may not. What sense does that possibly make?

No public and private gatherings of any size are allowed.

She also ordered Home Depot and Lowe’s stores to close off certain departments which she considers to be nonessential, such as seeds, plants and shrubs, flooring, and paint. People are forced to remain in their homes, but the Governor won’t allow them to purchase materials to work on projects.

Asked about this during an appearance on “Today,” she said this was not a problem because there was snow on the ground. She said, “So we just had snow. I’ve got snow on the ground in Lancing. We’re expecting 30 inches in the upper peninsula. The fact that we’re cracking down on people traveling between homes or planting, or landscaping or golfing, really for a couple more weeks, isn’t going to meaningfully impact people’s ability to do it because the snow will do that in and of itself.” My colleague Brandon Morse posted about this here.

Violators will be fined up to $1,000 and the changes were due to go into effect on Saturday. So, if anyone had plans to dine with family members on Easter Sunday, they were forced to cancel.

The Governor’s numerous odd orders and statements have begun to pile up and have led many Michiganders to question her judgment. Hence, the protest.

I think the thing that I’m concerned most about and that I think my fellow governors are as well is a resurgence. When you see a political rally, that’s what it was yesterday, a political rally like that where people aren’t wearing masks and they’re in close quarters and they are touching one another, you know that’s precisely what makes this kind of a disease drag out and expose more people. People came and converged together in Lansing and then went back out to their homes across the state of Michigan. The odds are very high that they’re spreading COVID-19 along with it. And so, it’s that kind of irresponsible action that puts us in this situation where we might have to actually think about extending stay-at-home orders, which is supposedly what they are protesting.

Great answer, Governor. Your constituents will love it!

WATCH: Gov. Whitmer tells @Maddow that Wednesday's protest at Michigan's Capitol is the “kind of irresponsible action that puts us in this situation where we might have to actually think about extending stay-at-home orders, which is supposedly what they protesting." pic.twitter.com/WxVtTVEeia