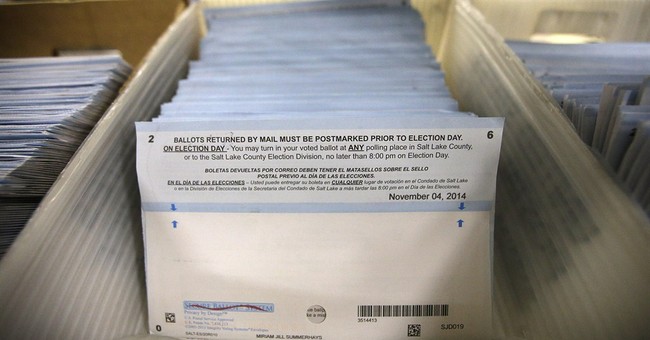 This photo shows mail-in ballots at the elections warehouse Monday, Nov. 3, 2014, in Salt Lake City. A steady increase of mail-in voting in Utah is changing the way candidates plan their campaigns and taking the impact and importance off of election day. Nine of Utah’s 29 counties are doing all mail-in voting this year and the number of people choosing to send in ballots early is on the rise across the state. (AP Photo/Rick Bowmer)

Given the Democrats’ improbability of winning back the White House in November, they have promoted one outlandish scheme after another hoping something will stick.

On Tuesday, ABC News reported that “two officials familiar with the document’s contents” told them “concerns about what is now known to be the novel coronavirus pandemic were detailed in a November intelligence report by the military’s National Center for Medical Intelligence (NCMI). The report was the result of analysis of wire and computer intercepts, coupled with satellite images.” On Wednesday night, the Pentagon issued a rare public statement in which they torpedoed the claim.

Two weeks ago, House Speaker Nancy Pelosi stammered through an explanation of how “deadly” Trump’s response to the crisis has been on CNN. A couple of days later, she announced the creation of the House Select Committee on the Coronavirus Crisis, which she said would be a “special bipartisan oversight panel” to review the Trump administration’s response to the crisis. She explained that, “The committee will be empowered to examine all aspects of the federal response to coronavirus.”

Rep. Adam Schiff (D-CA) is already setting up his “9/11 style” commission to investigate all of President Trump’s missteps in his response to the coronavirus crisis.

And now, we have former President Barack Obama trying to lend some legitimacy to the concept of voting by mail. Obama tweeted a copy of a New York Times article entitled, “Does Vote-by-Mail Favor Democrats? No. It’s a False Argument by Trump.” Obama’s caption? “Let’s not use the tragedy of a pandemic to compromise our democracy. Check the facts of vote by mail.”

Does Obama have any idea how disingenuous he sounds?

The article says that “leading experts” who have studied voting by mail have told The Times that it does not favor Democrats. Oh, well then, if experts said it, it must be true.

According to The Times:

As with false claims by Republicans about vote-by-mail fraud, there is no evidence to back up the argument from the right that all-mail elections favor Democrats. But Mr. Trump and some of his allies are warning that vote-by-mail poses an existential threat to their party, in hopes of galvanizing Republican opposition to a voting method that is widely seen as safer than in-person voting in the era of the coronavirus.

The Democrats love the idea of voting by mail because it becomes much easier to steal an election. Add to that the nationwide legalization of ballot harvesting, and it would be the end of the Republican Party.

In 2016, ballot harvesting was legalized in California. A party volunteer collects the paper ballots (absentee ballots) from voters who are unable or do not wish to vote in person and then delivers these ballots to a precinct. The opportunity to commit fraud with this practice is immense. In 2018, Democrats flipped several House seats in what had once been the Republican stronghold of Orange County from red to blue. Then-House Speaker Paul Ryan (R-WI) said “what happened in California defies logic.”

In Orange County, an estimated 250,000 harvested ballots were reportedly dropped off on Election Day alone. County Republican Chairman Fred Whitaker claimed the 2016 law “directly caused the switch from being ahead on election night to losing two weeks later.”

One interaction caught by a Santa Clarita family’s doorbell camera suggested how harvesting can work in practice. A harvester, identifying herself as Lulu, asks for Brandi, and says she is there to collect her ballot, explaining that there is “this new service, but only to, like, people who are supporting the Democratic Party.”

Tom Fitton, the founder and president of Judicial Watch, tweeted that the “Left’s “vote by mail” abuse would blow up clean elections in November. The Pelosi/Clinton scheme would result in sending ballots to zombie voters, the end of voter id, and wide scale voter intimidation.”

Fitton has just filed a lawsuit against the state of North Carolina because they have over one million inactive voters on their rolls. These are precisely the “voters” whose “mail-in ballots” would be collected and submitted in November if Democrats had their way.

That’s why Democrats’ calls for voting by mail have grown louder. Although we are still seven months out from November, Democrats are using the coronavirus as their ostensible reason why the 2020 election must be conducted by mail. Pelosi told CNN this week she planned (to try) to include a vote-by-mail provision in the next stimulus bill.

Let’s not use the tragedy of a pandemic to compromise our democracy. Check the facts of vote by mail. https://t.co/aTNxRV4Ws3