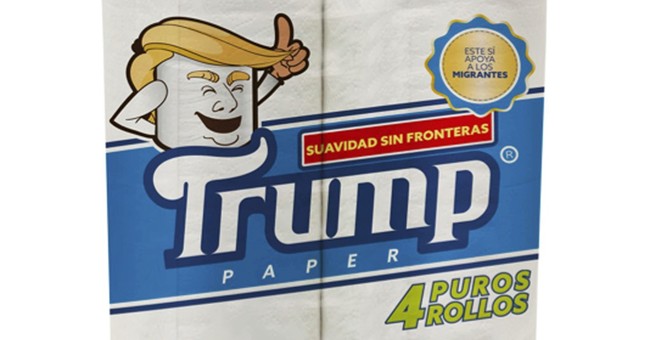 This illustration released by Antonio Battaglia shows toilet paper wrapped in mock-up packaging, featuring a cartoon image in the likeness of President Donald Trump, with the Spanish phrases “Softness without borders,” center, “This supports migrants,” top right, “Four pure rolls,” bottom right, which is a play on words in Spanish that roughly translates as “Pure nonsense.” Battaglia, a corporate lawyer, said his idea for “Trump” toilet paper came after Donald Trump’s comments characterizing migrants who enter the U.S. illegally as criminals, drug runners and rapists offended many Mexicans. “My thinking was: We can’t keep quiet, right? … So with this insult that was made, (I figured) I’m going to add my grain of sand in response.” (Antonio Battaglia via AP)

A Florida couple bought the entire stock of toilet paper, paper towels and napkins from their local Dollar Tree store.

My first question is, why would Dollar Tree allow this? Aside from the fact that our local grocery store has been out of toilet paper for weeks, there are signs on the shelves that limit each customer to three packs. (Not sure about paper towels or napkins.)

In the video below (which has gone viral), the couple is seen loading boxes into their truck from pallets on the sidewalk. They are berated, for good reason, by several onlookers.

A woman filming the scene said, “Look at this wonderful woman who just told me to go “f” myself, and mind my own “f”ing business…Don’t worry, you’ll see her on the street corner selling it for double in a minute.”

The buyer of the toilet paper shouts that she’ll be selling it on “the same corner where you work as a hooker.”

Obviously angry over this remark, and trying to come up with something really insulting, she says of the buyer, “I’ll bet you she likes Donald Trump too.”

“I knew it! I had you pegged right away! I had her pegged.”

Because only a Trump supporter would do such a selfish thing.

So this woman not only buys out a local Dollar Tree of every single box of paper towels, napkins, and toilet paper so that no one else can buy any, but caps it off with this: