Aaron Rodgers Shows His Wisdom: I Won't Give Coronavirus Advice "From My Ivory Tower" 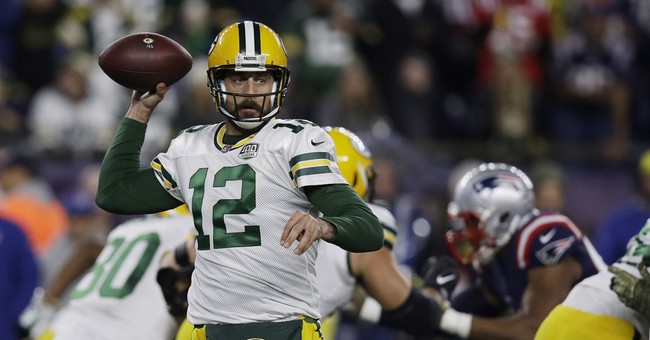 I like Greenbay Packers QB Aaron Rodgers. His philosophies on the field seem to be just as good as his philosophy on the field and his recent expression of self-awareness reinforces that idea.

According to the Wausau Daily Herald, Rodgers was being interviewed by PackersNews.com where he told the outlet that he’s in no position to offer advice about how to deal with the Coronavirus. As he tells it, he recognizes that he, a wealthy man who lives in luxury, isn’t going to complain about how bad he has it or how others should live their lives.

It’s a very grounded and, frankly, refreshing position for someone like him to take:

“One thing that I haven’t done or will not do is (be) one of those celebs who’s telling you how difficult it is, or stay-in-your-home stuff from a mansion,” Rodgers said on former Packers teammate A.J. Hawk’s podcast. “I just think that kind of falls on deaf ears. What I do know is that my friends who are small-business owners are really hurting. …

“There’s real people hurting, so I’m not going sit here in my privilege and tell people from my ivory tower to do this or do that … I will say, let’s all be smart about what we’re doing and what we’re seeing.

“But man, I know people are hurting and that is way more important to me than some sort of message that I can relate to you. That to me just falls on deaf ears.”

It’s always a breath of the freshest air to watch celebrities acknowledge that their position on the ladder of importance is pretty much near the bottom. While we do love to be entertained by them, their disappearance wouldn’t throw the world into chaos. They are, after all, a societal luxury.

This was even recently acknowledged by Ryan Reynolds who jokingly made the point that everything from healthcare workers to imaginary friends are more important than celebs.

This was also a point made recently by Anthony Hopkins.

“People ask me questions about present situations in life, and I say, “I don’t know, I’m just an actor. I don’t have any opinions. Actors are pretty stupid. My opinion is not worth anything. There’s no controversy for me, so don’t engage me in it, because I’m not going to participate,” said Hopkins.

(READ: You’ll Love Anthony Hopkins’ Answer On Why He Doesn’t Weigh In On Current Events)

What’s more, this was a message delivered to self-important celebrities very bluntly by comedian Ricky Gervais at the last Golden Globes.

Celebrities are great but their purpose is to entertain. When they perform, they make our lives a little more enjoyable. It’s when they begin thinking their fame means they’re societal leaders that we begin to see the problem. It’s cool to see people like Rogers know that when it comes to his troubles, they look very little like ours and that him offering advice to us would seem pretty ridiculous.