Dear Churchgoers, Don't Forget Your Authority When It Comes to Peaceable Assembly 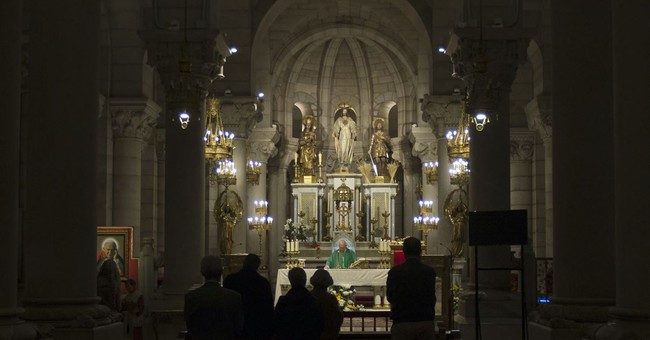 A priest gives a mass in the Almudena Crypt, a cavernous late-19th century Catholic temple under Madrid’s Almudena cathedral, in central Madrid, Spain, Thursday Oct. 25, 2018. Hundreds of protesters in Madrid are urging government and Catholic church authorities to prevent the remains of the country’s 20th century dictator from ending in the city’s cathedral. Spain’s center-left government has promised to exhume this year Gen. Francisco Franco from a glorifying mausoleum, but the late dictator’s heirs have defied the plans by proposing for his remains to be relocated to a family crypt under the cathedral. (AP Photo/Paul White)

The First Amendment in the Bill of Rights clearly states that:

All of this is very important, but for right now let’s focus on “the right of the people peaceably to assemble.”

The Constitution, especially the Bill of Rights, is a list of rules for anyone in the position of authority within the United States to follow. They cannot, under any circumstances, come between the people and their God-given rights. The “God-given” part is very important because we hold these truths to be self-evident that our rights come from a much higher authority than the government. Any government.

So when I see stories like the one I just wrote about, where a California sheriff is fining a pastor $1,000 and threatening him with six months of jail time…

(READ: Sheriff Claims Pastor Hid Congregants from Him On Easter and Is Fining Him $1,000 With a Threat of Jail Time)

…or a Mississippi mayor doing the same to churchgoers…

(READ: A Mississippi Mayor Dug in on Banning Drive-In Church Services, but Then Bill Barr’s DOJ Stepped In)

..or North Carolina police forbidding the gathering of churchgoers from attending drive-in services…

…I can’t help but feel a bit agitated that our own leaders who operate under the system of laws that have been around since 1791, seem to believe that it’s their privilege and authority to ignore said laws and run their respective jurisdictions as would a monarch.

I want to remind leaders that, when it comes to the Bill of Rights, that authority to gather peaceably rests with the people, not the leaders the people elected to be in office. More than that, however, I want the people to understand this.

When it comes to our rights, we are the authorities. Elected officials and law enforcement don’t have to like it, but they do have to abide by the rules laid forth in the Constitution. There is no authoritative body that has the legal capacity to tell a group of people that they have no right to peaceably assemble at a location such as a church. They do. You do.

It’s important to remember this, especially at a time when authoritative leaders are pushing draconian rules on you. Voluntarily abiding by them is fine, and social distancing is even considered wise. However, should you and a group of people decide to gather at your private residence or church, that is your right to do so. Authorities telling you it’s not your right are in the wrong and should they punish you for it, they should be taken to court where said authorities will be reminded who the true authority is based on Constitutional law.

I would also encourage you to read up on the rest of the Bill of Rights, which you can find in whole in the link below.

(READ: I Have Some Revolutionary Ideas That I Think Every American Needs to Read)