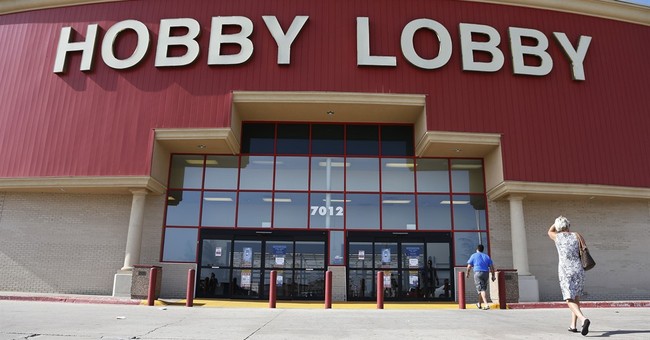 FILE – In this June 30, 2014, file photo, customers walk to a Hobby Lobby store in Oklahoma City. Federal prosecutors say Hobby Lobby Stores has agreed to pay a $3 million federal fine and forfeit thousands of ancient Iraqi artifacts smuggled from the Middle East that the government alleges were intentionally mislabled. Prosecutors filed a civil complaint in New York on Wednesday, July 5, 2017, in which Oklahoma City-based Hobby Lobby consented to the fine and forfeiture of thousands of tablets and bricks written in cuneiform, one of the earliest systems of writing, as well as other artifacts that prosecutors say were shipped without proper documentation. (AP Photo/Sue Ogrocki, File)

I’m sitting here reading up on some of the ways Democratic leaders have acted during this pandemic and while I’d like to say I’m shocked, the surprise that people who lean toward authoritarianism would abuse it just isn’t there.

Earlier today, I covered how various Democrat leaders were setting invisible crowns on their heads and ruling with absolute authority. It didn’t matter if their decisions made sense or not — you were going to obey…or else. Meanwhile, Republican leaders can’t seem to wait to get you out from under the boot of government and back to your daily life.

It’s a stark contrast and one that should be pointed out.

Digging deeper into what has been restricted by these Democratic leaders provides an even deeper look into what it is the left considers to be “nonessential.” It shouldn’t surprise anyone that the moment the leaders were handed dictatorial-like power over the people that one of the first things deemed “nonessential” was self-reliance.

I’ve talked about two examples, but I feel like they perfectly highlight my point.

The first example is Dallas County Judge Clay Jenkins and his treatment of Hobby Lobby. To be clear, the title of “Judge” is given to the head of Dallas County Commissioners Court. With Dallas county split up into four districts, it elects their respective commissioner and then collectively elects a “judge” who oversees the entire county. Dallas has the self-imposed misfortune of Jenkins being its judge.

When the pandemic struck, Jenkins jumped on the chance to put Dallas into lockdown, making it so that all businesses deemed “nonessential” would have to shut their doors until the order is lifted. However, what was deemed non-essential was left slightly nebulous. Grocery stores and construction-centric stores like Home Depot were still allowed to operate, but so were liquor stores and some department stores.

One store that stayed open was Hobby Lobby. While they might not seem essential at first glance, Hobby Lobby made the case that they sold the necessary materials that would allow people to make their own masks. With medical supplies selling out everywhere, and much of it going to the various medical staff that needed them, this is actually wise. Allowing people to buy materials to make their own masks, or masks for others, would essentially get around shortages and allow for the American people to participate in the production of a needed item.

Hobby Lobby is, however, not the most loved business by people on the left. They never could quite get over the fact that Hobby Lobby, a Christian organization (oftentimes considered unforgivable by leftists), won its case about which birth control it wanted its healthcare plans to cover.

When Jenkins heard Hobby Lobby was still open for business, he leaped into action. Sending county deputies to a Hobby Lobby location, he forced customers out of the store without letting them finish their shopping and shut it down. He then proceeded to take a victory lap on social media, accusing Hobby Lobby of putting profits over people and encouraging anyone to snitch on any craft store keeping its doors open.

His tweet is pretty disgusting, but what really irked me is that Jenkins made it clear that nonessential businesses need to be reported on if they were “ignoring my #SaferAtHome order.” Not “the order,” or “Dallas County’s order.”

Do you know of any smoke shop,craft store or other non essential business (not covered by @CISAgov ) ignoring my #SaferAtHome order and putting profits over public health in your area? Report on https://t.co/uERysAqFAr so we can shut them down ASAP. #FlattenTheCurve

Whether you like Hobby Lobby or not, their point was a good one. Selling materials that could allow citizens to create their own supplies would ease the burden. You could make the excuse that they’re risking spreading the virus by staying open, but it’s hard for me to take that seriously when I can still go and buy everything I need to make a bloody mary at the local Total Wine. Vodka isn’t going to cease the spread of the virus, but a self-made mask sure will help.

Don’t get me wrong. I’ve made a couple of trips to the liquor store during this pandemic to make some Rona-Ritas, but my most beloved tequila drink isn’t going to save lives. A mask very well could.

It doesn’t end with Jenkins, though. Michigan Governor Gretchen Whitmer may have gone even crazier. Not only did she ban travel to your own residence out in the woods should you have one, you can’t even do work around your own home such as gardening.

.@GovWhitmer has banned us from growing our own food. This is fucking insane. pic.twitter.com/qOGMsBBVXJ

It’s unclear why Whitmer would throw seeds on the list of things people aren’t allowed to buy. Gardening is a superb thing to do during a time like this. Not only is it a great solitary activity, it allows self-reliant families to have their own vegetables, thus easing the burden on grocery stores and allowing those who don’t have the capability to grow food more access to vegetables at the store.

Once again, we see self-reliance shot in its knees by authoritarians for no reason other than the excuse that it’s about safety.

We were told a long time ago by a very smart man that those who trade freedom for safety will get neither and here we see that on display. Authoritarians are shutting down Americans’ ability to take care of themselves at a time when doing so would make everyone safer. They’re choosing “safety” for you with the elimination of your freedoms.

Authoritarians always take aim at your ability to not need them.