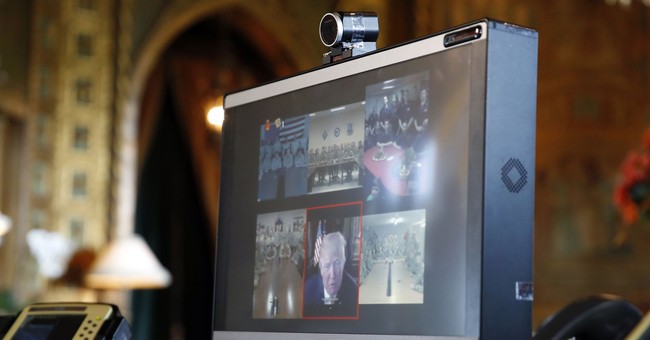 While the desire for video interaction is spiking the risk to more Chinese exposure is a reality.

With the nation locked in an unprecedented workplace stoppage those locked out of their offices are resorting to work-from-home scenarios. Others without such a need are looking at a similar challenge of desiring personal interactions. This has led to a massive stampede of people to start using video conferencing, and for some reason the go-to application for this has seemed to be Zoom.

In news stories and social media comments, the video conferencing app seems to be the most mentioned, with business meetings to virtual happy hours being staged on the relatively new format. What is becoming apparent though is that, while we as a nation have become sequestered in our homes due to a virus that emanated from China, this reliance upon Zoom to connect with others can further expose us to Chinese intrusion.

Zoom has become both a popular and profitable platform very quickly. So much so the company was successful last year with a launch of its IPO. But for those who are turning to the site, there needs to be wariness, if not outright caution. One of the ways Zoom has managed to achieve profitability is by the practice euphemistically called ‘’labor-market arbitrage’’, a quaint obfuscation for that once-condemned practice known as outsourcing. And a significant amount of Zoom’s significant workforce is residing in China.

Zoom disclosed in its IPO prospectus last week that most of its product development personnel are based in China. Zoom employs over 500 people across multiple R&D centers in China, which accounts for roughly 30 percent of its total workforce and 70 percent of its non-US-based employees, according to the prospectus.

The company has a rather free and easy attitude towards its clients using the application. While data mining is expected for most platforms offering a free service this can take on significant risk for some. The user agreement, while sounding like corporate boilerplate, does have ominous implications for some.

Zoom’s privacy policy is similar to many digital platforms’, claiming the right to collect and store personal data and share it with third parties such as advertisers. In Zoom’s case, that extends to what the company calls customer content, or “the content contained in cloud recordings, and instant messages, files, whiteboards … shared while using the service.”

Now consider you are a business conducting a conference, and all of your content is considered fair game for the company. Now consider the company has hundreds of its tech workers placed in China, the country renowned for having zero regard for intellectual property theft. This becomes a compounded threat to your business.

One other sketchy practice is that Zoom automatically connects with FaceBook to share user data. This is done without any direct attribution. Zoom does mention that it may share information with third parties, but it does not cite that FaceBook is both automatically rolled into the process, that it is connected instantly with just the downloading of the app, nor does it state that the data is being shared even if the user does not have a FaceBook account.

This is a data transfer that exists apart from a conference even taking place. Zoom notifies Facebook merely for times the app is opened. It also sends details about what device a user has, their service carrier, and what city they are in. The data also includes a unique advertiser tag identifying the user’s phone for direct marketing purposes.

Again, this is all being done for simply downloading the app, without even using the service. FaceBook requires its partners to make this practice evident to customers, but Zoom fails to do so.

This all adds up to Americans, already impacted by a viral outbreak, possibly making themselves even more vulnerable, and with the possibility of Chinese interests obtaining data on them.