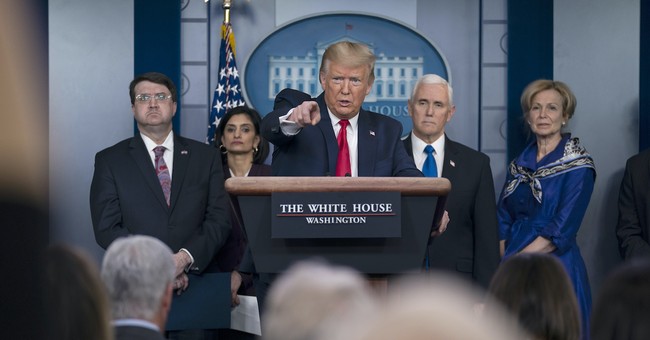 While it may seem like the media are all in on pronouncing President Trump’s Wuhan flu response as inadequate and slow, that wasn’t always the case. In fact, there was a time just a few months ago where the lion’s share of the media were complaining that the actions being taken were too harsh.

Gathering many of the different articles that took that line would be a herculean research task. Luckily, Lyndsey Fifield of the Heritage Foundation did the leg work and put out an epic thread that needs to be shared far and wide.

Here it is in all its glory.

Holy crap—flashback to @wapo quoting the Chinese FM slamming the Trump administration's 1/31 travel ban AND noting that WHO (still operating under Chinese disinformation about #COVID19) was against Trump's move to stop entry into the US from China. pic.twitter.com/kkHfgwrv4Y

From the Verge 1/31 – apoplectic that Trump was going against WHO recommendations (because he's such an anti-science xenophobe…) pic.twitter.com/G83YAaVhsT

I bet the CCP won't be banning Laurie! pic.twitter.com/MUdPiunyPi

I think this has to be the last one I post for now because after this I need to go walk my dog and have some wine. Maybe at the same time.

It should be noted that Fifield is only posting print articles here. Take all of the terrible takes above and multiple them by ten. That’s a rough estimate of the cable news and broadcast hits parroting this stuff during that time.

Just to hammer home the fact that the media were maliciously wrong in their pronouncements against Trump’s early actions, here’s Dr. Fauci letting it be known that the early travel ban saved lives.

Dr. Fauci sets the record straight: US stopping travel “very early” from China “has gone a long way” in fight against #coronavirus. pic.twitter.com/tTcJcqwQq7

All the media outlets who rushed to shill for China and bash the President because the orange man must be bad need to be held accountable. They don’t get to hand wave this away and pretend they’ve been doing yeoman’s work this entire time. No, they’ve been operating as partisan tools, shifting their narrative so as to train maximum fire on their political opponents. These are not people who represent a valuable part of our discourse. They are not defenders of our constitution. They are hacks, plain and simple.