I’ve often written about how Leftists and Democratic politicians often seem to go out of their way to craft legislation that is punitive, destructive, and sure to hurt the lives of most of their voters. Often, their laws and regulations are not just devastating—they’re downright malignant.

While I know what is happening—criminals are being freed to roam the streets freely, illegals are being encouraged to enter the country with little consequence, inflation is purposefully being juiced to rise even further, children are being crushed by draconian COVID policies while elites hold birthday parties in Martha’s Vineyard, soldiers are being pushed out of the military with CRT and trans indoctrination as well as vaccine mandates, Antifa thugs were openly encouraged to destroy our cities in the 2020 BLM riots, law enforcement agencies across the nation are struggling to hire because of the war on police—I’m often at loss to explain why it’s happening. What possible reward do these people get by purposefully crippling our nation?

I’ve posed this question to friends and family before, and I get a variety of explanations. A common one: all the things mentioned above slowly increase their power over you until you’re a compliant, quivering subject that they can control. While that might seem extreme, it actually makes sense. Many COVID restrictions in states like California and Michigan seem designed to make you bend the knee to authority and wander around like a mindless sheep waiting for their next decree. But again, I ask, what do they get out of this? In California, for instance, Democrats have a supermajority and can basically do what they want, so what additional power do they get by destroying the state?

Take Los Angeles or San Francisco, two once-beautiful cities beset by crime, homelessness, and open drug use. Much of their decline is traced back to purposeful action by city and state leaders. What do Hollywood celebrities, college professors, and politicians earn for helping the downfall of these great metropolises? After all, many of them live there too. Yes, I know they don’t feel the effects from their mansions in Malibu and Nob Hill, but even some of them were shocked last year when Beverly Hills philanthropist and husband to legendary record music producer Clarence Avant, Jacqueline Avant, was gunned down in her own home in a botched robbery by yet another felon out on parole.

Why, for instance, does George Soros want a lawless, dangerous civilization? The man has everything. He could spend his twilight years drinking fine wines from the deck of a super yacht. Why, instead, is he creating Mad Max in real life? I don’t get it. 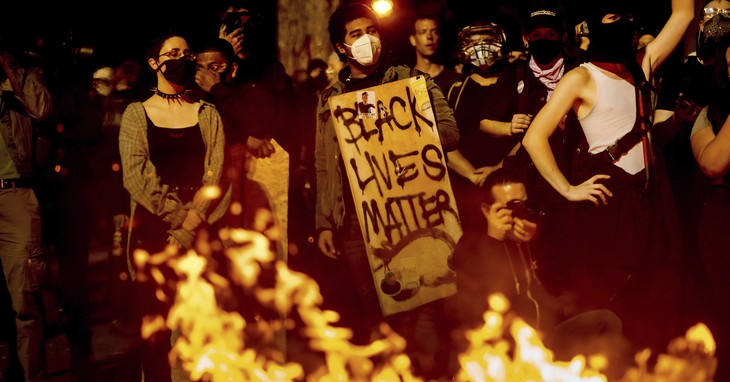 Another explanation I hear is that they’re setting the stage for a Communist revolution. They will make the populace so miserable, goes the theory, so disillusioned, that eventually we will be forced to change from our current system of government to some sort of Utopian perfection where everyone is cared for and a few powerful Party Apparatchiks hold all the power. Again, sounds great, but what’s in it for them? Most of them would lose in that situation, and only a few would prevail. That’s been the reality of every Communist country that’s ever been attempted. Vladimir Putin is happy now that he’s atop the pile, but how many dead bodies did it take for him to get there?

Why would the tech billionaires in this country—almost universally Leftist—support destroying the system that allowed them to prosper? I don’t get it.

Another theory I hear is that the Biden Administration is encouraging illegal immigration and lax border enforcement because they want to change the country’s demographics and increase the number of Democrat voters, therefore assuring repeated wins at the ballot box. This theory has some merit, but note that the Latin—excuse me, LatinX—voter base has been skewing rightward as of late. Be careful what you wish for.

Another hot-button issue is, of course, abortion. I get that many feel passionate about the subject, and conversations about it can go south in a hurry. But even if you think abortion is justifiable in some cases, can anyone seriously argue that it’s OK right up until the moment of birth? Yet that’s exactly what states like New York and California want to enshrine into law. Again, I ask, who the heck gains from policies like that? Not women. Not babies. Not anybody except the folks charging a premium for late-term procedures.

Now comes the “Inflation Reduction Act,” purposefully titled to fool you because it will probably do nothing of the sort. The reckless spending of this administration, and truthfully others before it including Trump’s and Bush the II’s, seems designed to further drive up the record increase in prices that are hurting families nationwide. Again, who’s benefiting?

Meanwhile, the Biden Administration in its quest to “transition” to green energy has declared war on fossil fuels. While it may be a noble goal to promote energy that doesn’t pollute, the technology simply isn’t there yet. To cripple our own energy production while we wait for that to happen makes no sense.

All they’ve done is outsource oil production and pollution to countries like Saudi Arabia and Russia while giving away our own power. Does it really make you more “green” if you have your neighbor burn your trash?

As I’ve watched the purposeful destruction of California, the state I still live in (for the moment, anyway), I’m often at a loss to explain what the hell is the matter with these people. Evolution has crafted us into beings whose number one goal is survival and reproduction. Many in our country have seemingly moved on from these Darwinian goals, and are actively working to destroy the country and the prosperity that have allowed generations to prosper and given Americans the best standard of living in history.

I challenge RedState readers to explain it to me—because I just don’t get it.

Bob Hoge is a RedState contributor, proud father and small-business owner.  He is shown sporting his Covid beard, which his wife has since forced him to shave. Say hi on Twitter @Bob_Hoge_CA