What is This? CNN Refers to Bernie Sanders as Thanos 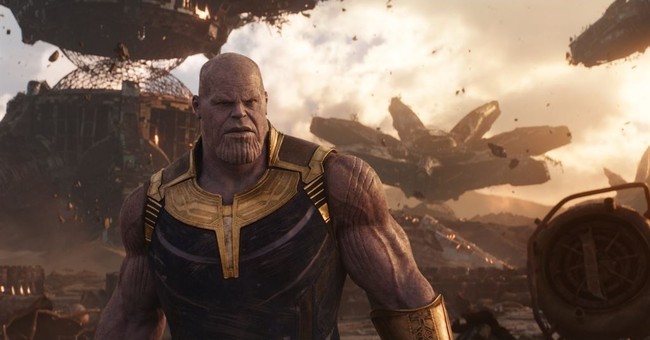 This image released by Disney shows Josh Brolin as Thanos in a scene from Marvel Studios’ “Avengers: Infinity War.” (Marvel Studios via AP)

Well — this one surprised me.

As noted by Alisyn, Joe’s rackin’ ’em up.

So goes it with Alisyn:

“That was a team. Okay? So what I saw was more than just an endorsement. I saw a joining together akin to — I mean, Joe Biden…he called it a team, so either he was taking a page from Abraham Lincoln, or to [Wajahat Ali’s] point, the Avengers.”

Therefore — as rolled out by Wajahat — Trump isn’t the megalamaniac supervillain after all:

“Yes. It was the great modern Avengers … It was all of them combined together to get the stones from Thanos. I thought Thanos was Trump, but apparently it’s Bernie Sanders.”

🙄🙄🙄So, with all the Avengers assembled here, this kid still chose a Thanos action figure!?🤔🤔 pic.twitter.com/NN31hPkfU9

Or should we stick to the O.G?

Only difference between Thanos and Trump that Thanos plan to reduce world population to half made some sense. #Trump #Iranattack pic.twitter.com/E3d7HLywFy

When it comes to Thanos, CNN’s Van Jones is definitely Team Trump:

WATCH: CNN's election coverage panel says the Democratic candidates are like "the Avengers" going up against "Thanos" Trump because none of them can individually beat Trump. pic.twitter.com/Yy5QInApYx

As for Wajahat, his sensibilities may veer a smidge from yours: the New York Times contributor went on to describe Beto O’Rourke — who promised to confiscate by force the best-selling hunting rifle in America — a “moderate.”

Do the New Avengers have what it takes to thwart Thanos?

Wajahat pointed out that Biden’s comic book cred had been quite questionable.

“Right now this is a last ditch effort to prop up Joe Biden, who let’s be honest, had a very flagging campaign so far, disappointing, but he came through last second in South Carolina, resurrected his campaign, got $10 million on the weekend, and he’s going to be competitive.”

“I think Bernie is going to get the delegate edge.”

Well, ahead of Super Tuesday, as indicated by RealClearPolitics, he was averaging 26% support.

But the movie ain’t over.

If CNN’s gonna refer to Biden and his formerly-competing supporters as a superhero team, why not get some political traction from the name itself?

In line with the candidate’s apparent efforts to get woke, perhaps Joe Cool and the Gang would better sock it to the patriarchy as the X-Men.