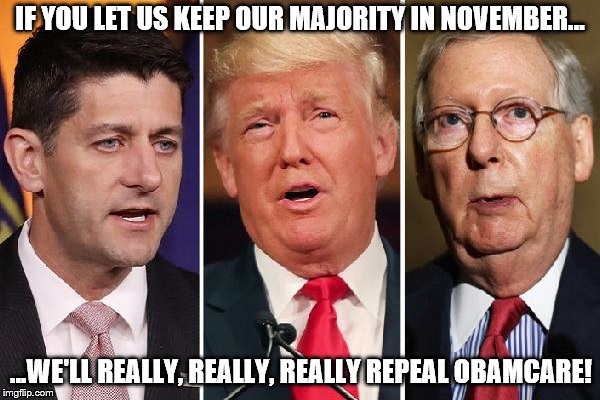 Good news, America! If we give Republicans control of the House and the Senate in November, they will repeal Obamacare! No, this isn’t an old headline found in the election-year archives from 2012, 2014, or 2016. This promise is now! Today! 2018!

In an interview on Hill TV yesterday, Republican Nation Committee (RNC) spokeswoman Kayleigh McEnany informed voters that if the GOP maintains control of the House and picks up a few seats in the Senate, bada bing, bada boom, the Republicans will pass the Graham-Cassidy Repeal-In-Name-Only healthcare bill—a piece of legislation that does nothing to fix the Obamacare disaster.

“We were a big proponent of Graham-Cassidy. That, of course, was a Senate bill that gave states the power and allowed each state to select what the best way forward was for them on healthcare.

“That was one vote short, and if we maintain the House as we expect we will, pick up a few Senate seats, Graham-Cassidy can become a reality.”

Besides McEnany’s sad and pathetic use of the GOP election-year playbook—make promises, break promises, repeat—Graham-Cassidy failed to pass in the first go around because it fails to do as promised concerning Obamacare repeal.

In an opinion piece on FOX News by Sen. Rand Paul at the time—he was one of the “no” votes—he pointed out how Graham-Cassidy failed to return healthcare decisions to the American people and how it instead created an even greater reliance on the federal government for our healthcare needs. And even though Graham-Cassidy eliminated Obamacare mandates—something that was accomplished in the Tax Cuts and Jobs Act—it “doesn’t repeal a single Obamacare insurance regulation.”

One more thing. Even though Graham-Cassidy was touted at the time within some conservative circles as a step toward Federalism and states rights, the block grants paid to the states by Washington bureaucrats as stipulated in the bill made states more dependent on the federal government, not less.

And for those partial to defending Trump by blaming Congress for the GOP’s failure to keep its promise to repeal Obamacare, the New York liberal supported Graham-Cassidy.

Clearly, the GOP has repeatedly failed to deliver on its promises. This is why Republicans engage in the politics of distraction by holding show votes on vital conservative issues like: abortion, term limits, and balancing the budget. It’s also why the RNC is recycling—for the fourth election year in a row—the promise to repeal Obamacare.

Maybe it’s just me, but I’ve got a feeling that repealing Obamacare will still be an issue in 2020 and will most likely be part of the GOP platform.