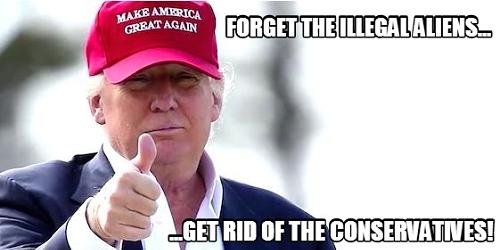 Yesterday, Mitch McConnell became the latest example of the need for term limits when he became the longest-serving, anti-conservative leader in US Senate history, at eleven years, five months, and ten days. Mickey’s pro-establishment mentality during his tenure has successfully protected incumbency against “unelectable”—his word, not mine—conservative opponents who threaten his position of power.

But another Republican with a track record of targeting conservatives who dare to challenge his power was also in the news yesterday—Donald Trump.

During the fake attempt at the fake repeal of Obamacare last year, Trump joined McConnell in blaming conservatives for their failure to end the disastrous healthcare law, specifically targeting the House Freedom Caucus for “snatch(ing) defeat from the jaws of victory” and calling for HFC members to be replaced in 2018.

The Republican House Freedom Caucus was able to snatch defeat from the jaws of victory. After so many bad years they were ready for a win!

Days later, after having declared war against conservatives, Trump people began targeting specific members of the HFC for not boarding the Trump Train, beginning with Justin Amash (R-MI).

As I wrote at the time, Amash defended himself by calling out the “Trumpstablishment” for embracing the status quo while attacking “conservatives, libertarians, and independent thinkers.”

Unfortunately, these threats have made an impact on HFC leadership as Mark Meadows is promoting a new brand of so-called conservatives known as “Trump conservatives,” thus confirming the fears of those who warned in 2016 that Trumpism would replace conservatism.

And now to yesterday’s news.

There have been others within the HFC who have refused to embrace Trumpservatism besides Amash, such as Mark Sanford (R-SC). However, as a result of his resistance, Sanford was targeted by Trump for elimination for being “unhelpful” to the president’s campaign. Trump endorsed Sanford’s pro-Trump opponent, Katie Arrington, in yesterday’s GOP primary, which she narrowly won.

Mark Sanford has been very unhelpful to me in my campaign to MAGA. He is MIA and nothing but trouble. He is better off in Argentina. I fully endorse Katie Arrington for Congress in SC, a state I love. She is tough on crime and will continue our fight to lower taxes. VOTE Katie!

As a fellow member of the “I’ve been attacked by Trump for being a conservative club,” Amash defended Sanford, returning fire against the Narcissist-in-Chief, saying that Trump wasn’t even close to possessing Sanford’s “humility in his role and (his) desire to be a better man.”

.@MarkSanford’s job is to support and defend the Constitution. He’s one of the most principled, consistent, and conservative members of Congress I’ve ever known. And unlike you, Mark has shown humility in his role and a desire to be a better man than he was the day before. https://t.co/zNYKb5WKmH

Unfortunately, Trump’s attack worked against Sanford, and with the HFC devolving into a group of Trumpservatives, we’re likely to see more of this in future GOP primaries.

Trump and McConnell are of one accord when it comes to their hatred of conservatives because conservatives are a threat to the status quo and the establishment’s power. This is why conservatives need to stop playing footsie with the Republican party, stand up to them, and defend our values while we still can.