Mitt Romney’s double vision should disqualify him for US Senate 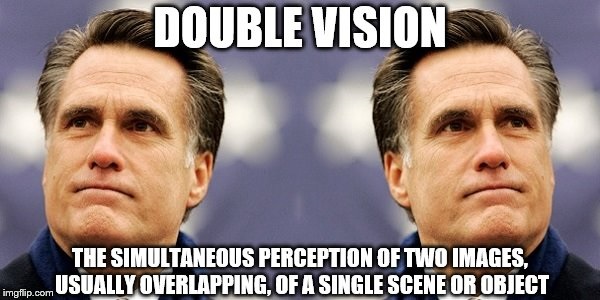 When “Massachusetts Mitt” Romney announced his candidacy to fill the US Senate seat being vacated by retiring Orin Hatch, the east-coast liberal assured the citizens of Utah that they could support his carpetbagger campaign because he was “a Utahn at heart.”

When faced with defending the political chameleonism of his past to party bosses skeptical of his commitment to the Beehive State, Romney promised to “call them like I see them” when it comes time for him to keep his campaign promises.

Without even realizing it, Romney’s US Senate campaign has revealed the reason behind his history of holding positions on both sides of nearly every issue. I’m sad to report that Mitt Romney suffers from a malady all too common in Washington—political double vision—and has for his entire career.

We saw the first indications of his condition when Romney attempted to unseat Ted Kennedy for the US Senate. In that 1994 campaign, Romney ran as a Republican to become the party nominee, but ran as a Ted Kennedy clone during the election, adopting his positions on issues like abortions and healthcare.

Several years later, Romney became governor of Massachusetts based primarily on his promise to create a free-market “conservative” solution to that state’s healthcare problem. However, once in office, Romney helped create Romneycare—the blueprint for Obamacare—with the help of Ted Kennedy and other Democrats.

And, of course, in 2012 Romney defended Romneycare while attacking Obamacare as he tried to convince America that he was “severely conservative” despite his liberal history.

With this documented track record, Romney has embarked on a type of severely conservative redux as he tries to hide the catastrophic diagnosis his serious condition.

Currently, in his US Senate campaign in Utah, Romney promised to “bring Utah values to Washington” in areas like trade and balanced budgets, which meant that he would be opposing Trump and the GOP establishment on these issues. However, due to his double vision condition Romney is seeing things differently now that he finds himself in an unexpected fight for the GOP nomination after his coronation by the establishment failed to materialize.

For entirely personal reasons, Romney was opposed to Trump in 2016, but now he’s a big fan as he faces the reality that the Republican party is the party of Trump, even predicting an easy 2020 reelection for the New York liberal.

Romney used to criticize Trump’s policies on trade and tariff, spending, and national security, but in a recent campaign appearance he dismissed Trump’s trade tariffs, saying that they won’t create a recession and how Trump’s endless trillion-dollar deficits are a good thing, calling them “highly simulative” for the economy.

Double vision should disqualify Romney, but in the age of Trump and today’s GOP, it’s actually a requirement for the job.