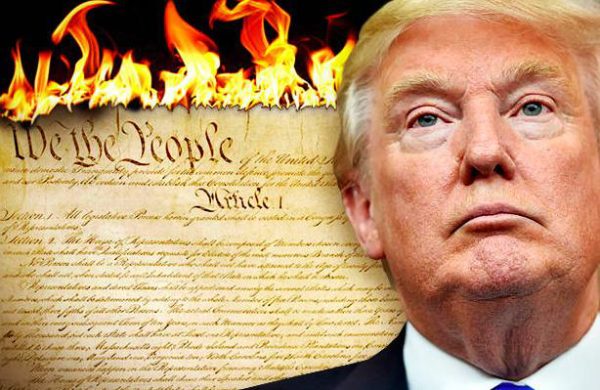 Yesterday was another opportunity for Trump to bask in the praise and adulation of his friends at FOX News after appearing to keep a campaign promise to cancel the Iran deal created by Barack Obama with the help of Sen. Bob Corker. And just as he does every morning, Trump began his day with a daily briefing from FOX & Friends.

Now, you’d think the Narcissist-in-Chief would be content in the positive coverage he usually gets from the so-called conservative media, but that’s not how our ego-maniacal president operates. If he fails to receive 100% positive news, Trump immediately goes on the offensive against so-called “Fake News.”

Immediately following this segment, Trump showed us how he possesses no convictions of his own by sending a Tweet parroting the report and, true to form, suggesting that placing a limit on the First Amendment might be a viable solution to silencing his critics in the media.

The Fake News is working overtime. Just reported that, despite the tremendous success we are having with the economy & all things else, 91% of the Network News about me is negative (Fake). Why do we work so hard in working with the media when it is corrupt? Take away credentials?

In Trump’s own words, news is only “Fake” when it says something “negative” about him.

As my readers and listeners know, Trump has been using his “Fake News” spiel to target news outlets who refuse to embrace the reality show being produced in the White House, and he hasn’t been shy about essentially eliminating the First Amendment to silence them.

Over the past two months alone, Trump has promoted the creation of a state-run media, and his Department of Homeland Security began compiling a database to spy on journalists and bloggers in the name of “national security.”

Trump’s goal when it comes to the news media has been clear from the early days of his campaign when he threatened to expand libel laws to make it easier to sue those who write “negative” articles—a threat he renewed in January. So, this latest threat should come as no surprise.

However, it should serve as a warning to a clear and present danger. When a narcissistic egomaniac with a demonstrable ignorance and/or disregard concerning the Constitution is armed with the power of the presidency and starts sounding like a WWII dictator, we need to remember the words of John Adams: “A Constitution of government once changed from freedom can never be restored. Liberty, once lost, is lost forever.”

We need to stand up against anyone in any office who at any time for any reason dares to threaten any of our Constitutional rights.