Mike Pompeo at CPAC: U.S. Is 'Greatest Nation In The History Of Civilization' 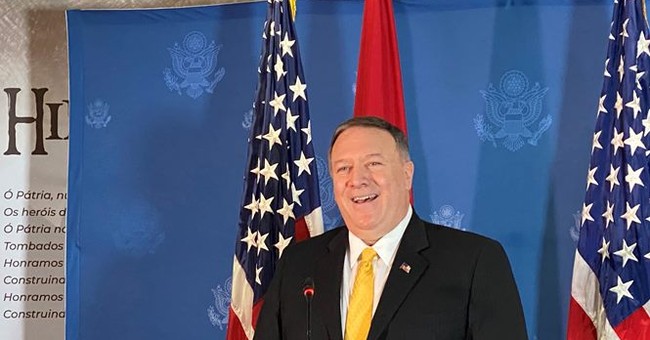 Secretary of State Mike Pompeo spoke from the main stage Friday at CPAC and gave a speech that was at once informative — specifically in terms of what the State Department considers their mission — and also inspiring, as he refrained from shyness regarding American Exceptionalism.

Pompeo, who spent time as President Trump’s Director of the CIA before moving into the lead role at State, laid out the foreign policy mission and goals of the Trump administration for the packed room full of conference attendees.

The former Army man said one defining characteristic that he, personally, has tried to bring to his work in government is the idea that you never give an inch on values, a philosophy he employs while traveling the world as the U.S. highest-ranking diplomat.

He also sang the praises of the administration for the work it’s already done.

“We are safer than ever, our economy is more prosperous than ever…and President Trump will not stop winning,” the Secretary said.

Pompeo also said that the administration has constructed a foreign policy around national security and recited a litany of American enemies — Abu Bakr al-Baghdadi, Soleimani, Hamza Bin Laden – who have all been eliminated as threats since Trump entered office.

“Can we all agree the world is a better place because these people are gone?,” Pompeo asked as the room erupted in applause.

Pompeo said under his leadership, the State Department operates under a three-tier philosophy: realism, restraint, and respect. He also wasn’t shy about taking a few digs at some of his predecessors — most notably John Kerry — in saying he wasn’t in the office for the cocktail parties and connections.

He stresses that the point of relationships with other nations is to change behavior if necessary, rather than simply put ink to paper and come away with a signed — but meaningless — document.

“I could go on, but time is short and winning is exhausting,” the Secretary said, before closing by calling America a “force for good” and the “greatest nation in the history of civilization”.