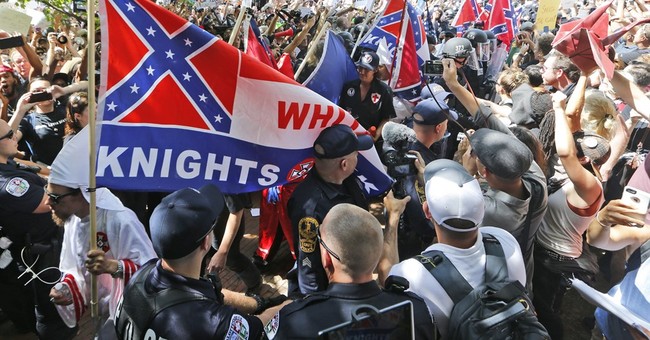 This July 8, 2017 photo shows members of the KKK escorted by police past a large group of protesters during a KKK rally in Charlottesville, Va. (AP Photo/Steve Helber)

As someone who has monitored media stories and headlines for over two decades, I thought I had pretty much seen it all.

It all started with an executive order signed by Georgia’s Gov. Brian Kemp (R) on Monday, which waived a 1950s law that banned the wearing of masks on public property, as reported by the New York Post:

Gov. Brian Kemp signed an executive order temporarily suspending 1951 legislation creating a misdemeanor offense for people who conceal their identities while on public property — a law passed to combat klansmen.

Kemp said the order allows Georgians to were protective facemasks during the coronavirus pandemic without having to worry about a run-in with the law.

“I signed an order to allow Georgians to wear masks in public to mitigate the spread of COVID-19 – in accordance with CDC guidance – without fear of prosecution,” Kemp tweeted.

Kemp suspended the law at the urging of the state’s Democratic party, who expressed fears that black citizens would be unfairly targeted for wearing masks in public to protect themselves from the Wuhan coronavirus:

The head of the Democratic Party of Georgia penned a letter urging the governor to suspend the 1951 law, which makes it illegal to wear a mask at most public events, because state officials “need to encourage Georgians to wear face coverings when out in public, not punish them for it.”

And Atlanta Mayor Keisha Lance Bottoms ordered the city’s police officers not to enforce the law after reading a report that two black men were forced out of a Walmart in Illinois because they wouldn’t take off their surgical masks.

Request made, law temporarily waived. So no problems, right?

Take a look at how WGXA framed their reporting in this tweet:

Getting ready to do a story on this. Tweet was deleted but .. ugh. Just not a good look at all. (h/t @politicalmath) pic.twitter.com/sdl52qw4Vr

Twitter user @PoliticalMath caught them in the act and called them out:

This shit is exhausting.

What the Georgia governor did vs how it was reported pic.twitter.com/5OQSECWR5o

Their actual report on Kemp’s move correctly notes the history of the law and how it has been enforced over the years, but their social media framing of the story was garbage. The tweet ended up being deleted, and The Blaze reported that their Twitter account was actually suspended for a short period of time over the tweet.

Be better, WGXA. Please, please be better than this.