Watch: PBS Journo Yamiche Tries to Cancel Surgeon General With Wokeness Lecture but He Was Not Having It 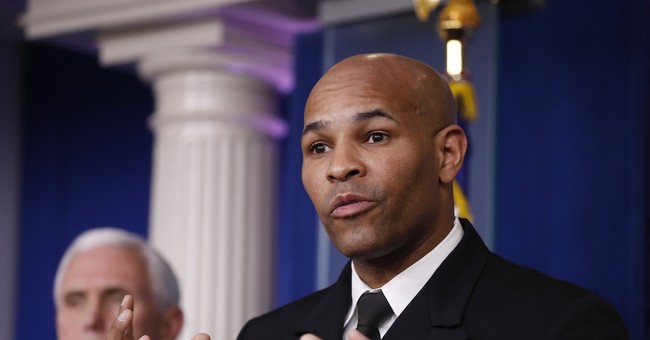 Bear with me as I set it up by way of first giving you some background on why the interaction between PBS White House correspondent Yamiche Alcindor and Surgeon General Jerome Adams happened in the first place.

There have been a lot of media reports over the last week or so about how the Wuhan coronavirus has affected the African-American and Latino communities. Some reports have talked about how there is allegedly this belief in the black community that they can’t catch the virus. Other reports have mentioned Democratic lawmakers who have suggested that the reason the virus seems to be disproportionately impacting black and Latino Americans is due to what they described as information and wealth inequality as well as healthcare access issues.

President Trump has referred to it as a “real problem” that was showing up “strongly” in the data that was being reported so far.

So with that in mind, Dr, Adams, who is black, used his platform at today’s briefing to address the concerns in and about black and Latino communities specifically, but with general information that all people could benefit from hearing.

In his remarks, Dr. Adams spoke about how some pre-existing conditions like asthma were more prevalent in communities of color, putting them at a higher risk for contracting the disease. He also pulled out his inhaler to show that he, too, had suffered from asthma. Adams also put out a plea to young people in these communities to think about their “abuela” and “pop pop” and “big mama”, and advised against using alcohol, tobacco, and drugs.

Watch the two clips below:

Surgeon General Jerome Adams, discussing black Americans' higher asthma rates, pulls out inhaler he's been carrying for 40 years and says he hopes it "shows little kids with asthma all across the country that they can grow up to be surgeon general one day" https://t.co/ZgFlh9izBb pic.twitter.com/AjceS0MueK

Adams has given similar advice before on talking to your “pop pop” and other family members about the Wuhan coronavirus. But this time around when he did it he apparently offended Alcindor, who proceeded to give him a mini-lecture on how “some people online” were “offended” by his allegedly racially insensitive language.

She tweeted about it before she asked her question to him:

The “some” and “many” people who found this “highly offensive” were … her. Watch Alcindor snidely ask the question below, and then check out Adams’ response. It was pretty close to perfect:

.@Yamiche to Surgeon Gen. Adams: Do you have a response for using phrases like "do it for big mama" when addressing how communities of color can approach stemming the spread of COVID-19?

Adams: "That was not meant to be offensive, that's the language we use [in my family]." pic.twitter.com/f9RLuypsim

“I’ve been meeting with the NAACP, with the National Medical Association, with others. I actually talked with Derek Johnson multiple times this week, the head of the NAACP, and we need targeted outreach to the African-American community and I use the language that is used in my family,” Adams explained.”I have a Puerto Rican brother-in-law. I call my granddaddy, granddaddy. I have relatives who call their grandparents big momma. So that is not meant to be offensive.”

“It is not just about what you do but you also are not helpless,” he added. “We need to do our part at the federal level, we need people to do their part at the state level and we need everyone, black, brown, white, whatever color you are, to follow the president’s guidelines, the coronavirus guidelines and do their part.”

“So you recommend that all Americans avoid tobacco, alcohol and drug use?” Alcindor asked.

“Absolutely. It is especially important for people who are at risk in comorbidities, but yes, all Americans,” Adams clarified.

What was mildly amusing was Dr. Fauci’s reaction when he was called up afterwards. He had a look on his face like “I can’t believe we’re even having to clarify this.” And he’s right.

We’re in the middle of a pandemic where there are communities that have been disproportionately impacted, but Alcindor – who is paid with our tax dollars – tries to go the woke route with the Surgeon General at a time when political correctness could quite literally kill people?

Someone should leave this note for Yamiche after the stunt she pulled today:

If journalists wonder why so many people don’t trust them and don’t take them seriously, garbage virtue signaling like the kind Alcindor engaged in at the briefing is one on a long list of reasons why.