Analysis: Here's How the Media Are Playing Right Into Trump's Hands With 'Chinese Virus' Obsession 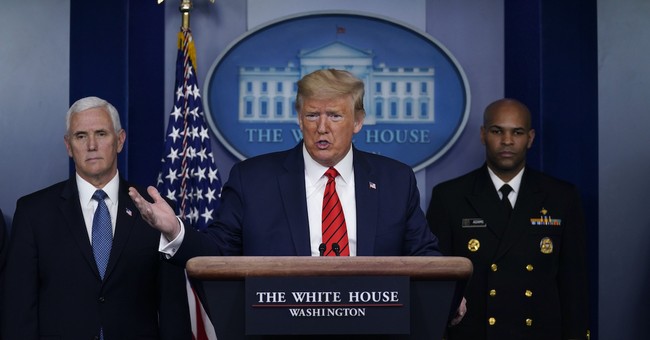 The national media are a predictable lot, to be sure, but I have watched in disbelief at how they have shot themselves in the foot over and over again this week with their obsessive questioning about why President Trump continues to use the term “Chinese virus” to describe the Wuhan coronavirus.

To my recollection, Trump was asked about it three press briefings in a row. In one of them, I believe he was asked the same question by four different reporters. Keep in mind that these are press conferences designed to provide the American people with important information on the latest developments in the fight against the Wuhan coronavirus outbreak.

Yet the press acts like the vast majority of people in America who are having to stay indoors except to go out for food and meds are interested in the gotcha games the White House press corps plays over semantics while we’re in the middle of a global pandemic.

The exchange this week that sticks out to me as the most representative of the media’s bizarre obsession with “Chinese virus” is one I wrote about Wednesday. Here’s a recap:

Using an incredulous tone, a clearly annoyed ABC News White House correspondent Cecilia Vega asked Trump “Okay, why do you keep calling this the ‘Chinese virus’? There are reports of dozens of incidents of bias against Chinese-Americans in this country.”

To further expand on her question, Vega said that “your own aide, Secretary Azar, says he does NOT use this term. He says ethnicity does not cause the virus. Why do you keep using this? A lot of people say it’s racist,” she alleged, not pointing out that it’s clear from her tone and facial expressions that’s she’s one of those people who believes it’s “racist.”

Trump calmly responded by simply telling her that he uses it “because it comes from China. It’s not racist at all [to say it]. No, not at all.” He repeated himself to try to get the point across. “It comes from China, that’s why. Comes from China. I want to be accurate,” Trump again noted, this time emphasizing the name “China” in hopes that Vega would understand.

She didn’t. Growing more agitated, Vega pressed on as Trump attempted to call on another reporter. “And no concerns about Chinese-Americans in this country? Are you comfortable with this term?”

Trump kept his cool, but there was a noticeable shift in his demeanor. “I have great love for all of the people from our country.” he explained. “But, as you know, China tried to say at one point – maybe they’ll stop now – that it was caused by American soldiers. That can’t happen. It’s not gonna happen. Not as long as I’m president. It comes from China.”

He then pointed to another journalist to get their question.

Watch the illuminating exchange below, in particular Vega’s hostile tone and agitated expressions:

As I’ve noted before, even if Trump had been considering dropping the word “Chinese” off of his description of the virus, the idea would have been thrown out with the dirty bath water the moment China started to blame the U.S. military. But beyond that, let’s put things in perspective here to explain just how absurd their continued line of questioning on this front actually is.

We have a national press corps who are echoing talking points from the Chinese government on how using the term “Chinese virus” is “racist.”

At the same time, a lot of Americans are stuck at home, and have little to do because everything is closing.

So they’re catching up on the news. They’re reading the reports about how China destroyed evidence about the virus in its early stages, and could have possibly saved thousands of lives and spared hundreds of thousands more people all over the world from getting sick in the first place had they acted on it immediately instead of trying to cover it up.

Trump and every single member of his team know that every single person in America who has suffered from the virus, or who is currently suffering from it, or who has died from it did so because of deliberate actions from the Chinese government to keep the spread of it in Wuhan quiet.

Yet the mainstream media are treating him like the bad guy for making sure the American people never forget that.

They despise Trump with a passion, but it’s almost like they want him to get reelected.

If the media want Trump re-elected by massive numbers, they should keep asking him why he's mean to China after they unleashed coronavirus on an unsuspecting world.