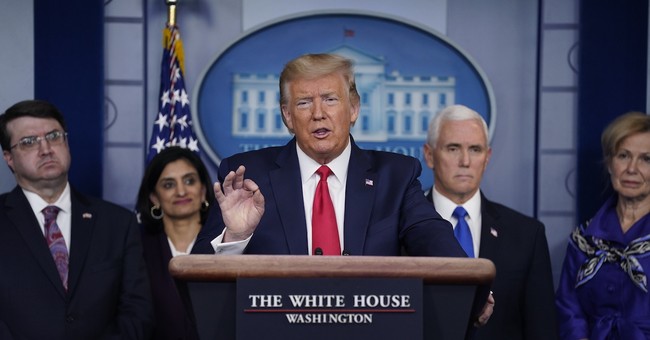 As my RedState colleague Nick Arama wrote earlier, CNN’s chief political correspondent Dana Bash has taken a lot of heat from the Usual Suspects for commending President Trump for the leadership he has shown during the Wuhan coronavirus crisis.

On whether or not Trump looking presidential in an election year during a time of crisis makes Joe Biden’s election prospects harder.

As primary results came in Tuesday night, CNN senior political commentator David Axelrod noted that in spite of the fact that the crisis “would rob Trump of the ability to do these large rallies”, the pandemic had given him “one big platform right now” to demonstrate to the nation that he is up to the task of leading Americans through it.

“He’s the president of the United States in the midst of a crisis,” Axelrod pointed out to a concerned-looking Terry McAuliffe and CNN chief political analyst Gloria Borger, who was clearly frustrated with this development.

Axelrod also predicted that if Trump “consistently appears to be wrestling with that crisis, this is a country that likes to rally behind the leader.”

At that point, CNN anchor Anderson Cooper marveled at how “it was also interesting to see him today sticking through the coronavirus task force comments that normally he wouldn’t even be there at all.”

Axelrod then speculated that there had been some “big strategic discussions” behind the scenes as to how Trump presented the issue to the American people, at which time an agitated Borger chimed in noting her disagreement, suggesting Trump “acts more like an emcee at the events than he is as a leader who is giving you information that you need as an American citizen.”

It was Borger’s opinion that Vice President Pence was the one who seemed “much more in command” of the press briefings.

Either way, said Axelrod, “we shouldn’t underestimate the platform [Trump] has here just as a pure political matter.”

Axelrod also conceded in fairness that Americans “should be rooting for [Trump] to get command of this situation” but that all of this had made Biden’s campaign more difficult to navigate.

“If you’re Joe Biden, you have to think about how do you run against a guy who’s spending hours on television every day talking to the American people about this mortal threat?” Axelrod wondered, to Borger’s agreement.

Watch below, and take careful note of the facial expressions of every panelist:

Just another day at CNN…