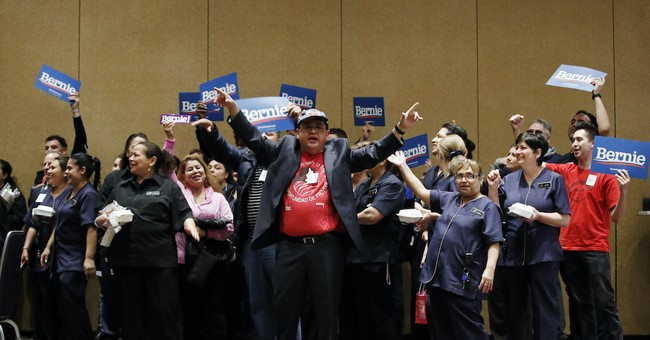 As I write this, David Frum is trending on the Twitter machine.

And not for a good reason.

The prominent Never Trumper made an appearance on BBC Tonight to discuss Super Tuesday results as they come in along with the particulars about the Democratic presidential candidates and their supporters.

In a clip that is being widely shared and mocked on social media, Frum compared and contrasted supporters of Sen. Bernie Sanders with Joe Biden supporters. Here’s what he said:

Seeming to catch himself mid-sentence, Frum added that “they’re both equally morally worthy but the first group are more reliable.”

Twitter liberals, many of them Bernie Bros., were not amused:

Everyone in the working class should despise David Frum with a passion for these sorts of remarks.

It's just too easy to hate David Frum. https://t.co/g1EspYI5JH

Interesting that #Resistance hero David Frum hasn't learned after over 3 yrs of his con-artist game of having changed his stripes is still not able to hide his fangs and blood-lust in what could have been just casual conversation. No wonder @krystalball was caught off guard.

David Frum is a douche. Bernie Sanders appeals to the people who have to decide between groceries and medical bills. Joe Biden supporters want their SS checks to afford their snowbird second home.

David Frum and Rick Wilson on Election Day: “Yeah I couldn’t make it to my polling place they took too long with my Panera Bread order.”

Okay, I actually laughed out loud at that last one.

It’s not clear what the context was behind Frum’s remarks, but I’m guessing he was probably asked which voters were the most likely to show up and vote on primary day. If so, there were better ways to put it than how he did. Something along the lines of “young liberal voters [who favor Bernie and who want everything for free] can’t always be counted on to show up, but older voters [who favor Biden and who are arguably more responsible] can.”

But he didn’t come anywhere close to saying that. He more or less said the quiet part out loud about how Never Trumpers feel about Bernie Sanders and his base of supporters. So the jokes are rolling in at Frum’s expense (and we’re thankful for the writing material!).

Join my RedState colleagues and I as we liveblog Super Tuesday results as they come in!