A new and troubling — more troubling? — devolution of the situation on the ground in Portland is that rioters have begun to turn their attention to “livestreamers” who are using cameras and cell phones to capture events and broadcast them in realtime over the internet.  The rioters realize that the videos being transmitted out to the world over the internet are actually helping federal law enforcement by giving them video surveillance of the rioters activities without having to leave the courthouse building.  The video is also helping to build an evidentiary record for law enforcement to use in investigating and prosecuting rioters.

In addition, a state judge in Seattle recently ordered five media outlets in Washington to turn over unpublished video footage and photographs of protests that dealt specifically with the destruction of Seattle PD vehicles and other property in response to a subpoena, where the footage will likely be used to build cases against violent protesters who engaged in the acts of destruction.

Now the rioters are using intimidation and violence against the “livestreamers” in the crowd to take their video feeds off-line, and deny law enforcement authorities inside the courthouse that “window” into the events happening outside. 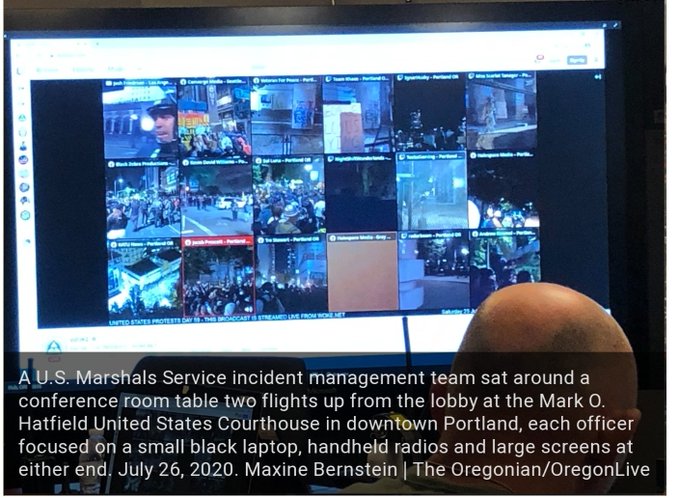 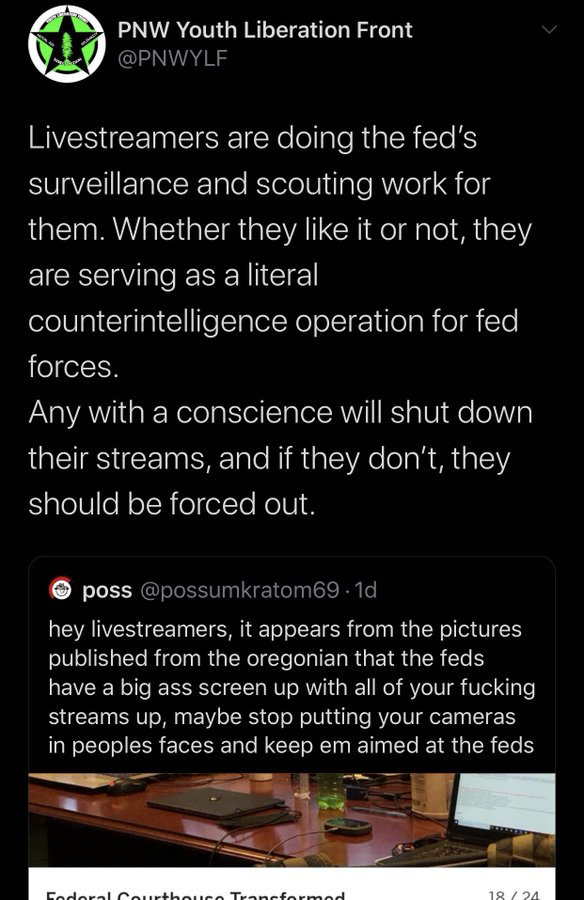 The PNW (Pacific Northwest) Youth Liberation Front has been described as an information hub for protester plans.  Its Twitter and Facebook accounts post details about where and when protests are happening.

The group describes itself on Twitter as a “decentralized network of autonomous youth collectives dedicated to direct action towards total liberation,” but the descriptoin includes a black flag emoji adopted by Antifa as a symbol of anarchism. It regularly publishes information as an organizing platform telling people where and when to meet. The PNW Youth Liberation Front Twitter account has 11,000 followers, and the Facebook page has more than 3,600 followers.

A post purported to be by the PNW Youth Liberation Front is published on Radical Guide, a website meant to catalog and highlight radical leftist groups and individuals, as well as their actions and art. The stated goals on the post range from calling for an end to militarized weapons by police, to taxing the wealthy, to increased funding for a reformed school system.  On Twitter, the PNW Youth Liberation Front has called for sustained use of tactics relying on confrontation and openly eschewed collaboration with police.

Just interviewed a #Portland local (didn't want to be filmed) , who was chased out the of crowd for filming. He shared his perspective on the ongoing civil unrest. pic.twitter.com/76As3br6xV

As the level of violence by the protesters, and the response from the law enforcement agents both continue to escalate on an almost nightly basis, the significance of this live video feed to both sides is going to become more significant as well.  The law enforcement agents plan their responses to provocation based on the intelligence they have — including what they see from the “livestreamers”.  The rioters are constantly looking for ways to stay one step ahead of what they anticipate the response is going to be in order to minimize its effectiveness.

As the level of violence goes up, the stakes for miscalculation go up on both sides — and the “livestreamers” are caught in the middle.