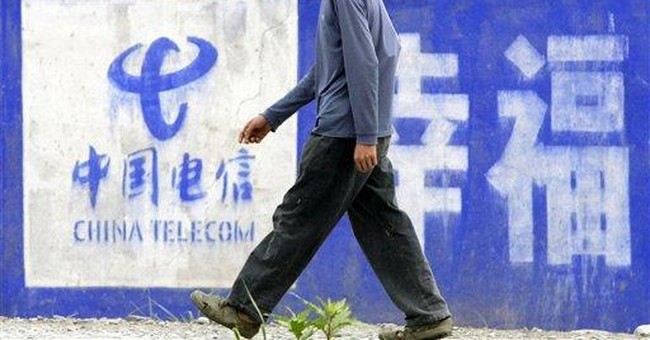 In this May 19, 2008 file photo, a villager walks past a billboard for China Telecom, near Xiushui, in China’s southwest Sichuan province. China Telecom Ltd. said Thursday, Aug. 28, 2008, that its first-half earnings slipped 8 percent as revenues for fixed-line voice service shrank and warned it faces pressure on profits as Beijing carries out a planned restructuring of its telecoms industry. (AP Photo/Greg Baker, File)

Assistant Attorney General for National Security John Demers said in a statement accompanying the announcement that “today, more than ever, the life of the nation and its people runs on our telecommunications networks.”

“The security of our government and professional communications, as well as of our most private data, depends on our use of trusted partners from nations that share our values and our aspirations for humanity,” he wrote. “Today’s action is but our next step in ensuring the integrity of America’s telecommunications systems.”

The FCC said that they were already looking into the question and would be reviewing it more.

The Executive Branch’s review, led by DOJ, found that China Telecom “is vulnerable to exploitation, influence, and control by the PRC government” and that its broadcasts “provide opportunities for PRC state-actors to engage in malicious cyber activity enabling economic espionage and disruption and misrouting of U.S. communications.”

China Telecom also allegedly provided investigators inaccurate statements on its own cybersecurity practices and where exactly it keeps its U.S.-based records. The company has also reportedly failed to comply with a 2007

More than time, even before all their despicable conduct with the pandemic. Both sides of the aisle, with Senate Minority Leader Chuck Schumer (D-NY) and and Sen. Tom Cotton (R-AR), had previously asked the FCC to consider banning China Telecom over national security concerns last year.

FCC Commissioner Brendan Carr said it was time to reconsider our relationship with companies owned or controlled by China’s communist regime.

It’s time to reconsider our relationship with companies owned or controlled by China’s communist regime.

The Chinese Gov’t uses ‘China Telecom’ to further its intelligence collection & espionage efforts in the US. @SenatorCarper & I have led a yearlong PSI investigation into this and will be releasing a report in the coming months. https://t.co/i0FH0cwtsp

More of this. Let the ban hammer fall. Let’s start cutting the ability of China to injure us in the future.