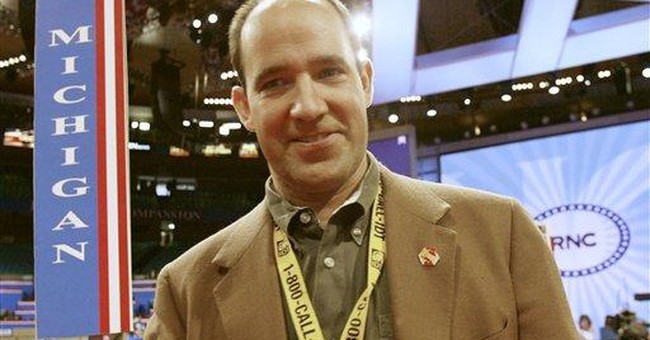 In this Aug. 31, 2004 file photo, Matthew Dowd, former pollster and strategist for President Bush, is seen on the floor of the Republican National Convention in New York. (AP Photo/Charles Dharapak, File)

We’ve been reporting a lot on the Wuhan virus and one of the basic things we have been saying is try not to panic and keep it in proper perspective.

Most people who get it, it’s going to be very mild. They might not even realize they have it. Be conscious that those most affected will be the elderly or immunocompromised people and people who already have respiratory issues.

Obviously approach it intelligently, follow the proper medical guidelines being put out there avoiding big gatherings, making sure your hand washing and isolating if you feel ill.

But apparently, Never Trump ABC political analyst Matthew Dowd either didn’t get the message or isn’t getting the point of it.

He’s trending this morning because everyone is mad at him for this tweet.

Now, a virus isn’t like a terrorist. It’s actually perhaps the one time not to be seemingly encouraging hugging at big gatherings.

I believe in discouraging panic and unreasonable fear. We need to look at things in proper perspective. But that doesn’t mean that hugging or seemingly encouraging hugging makes sense.

What makes this all the more crazy is that Dowd has been attacking President Donald Trump for supposedly not taking the virus seriously. He tweeted about ten days ago condemning Trump for not cancelling rallies. Then he goes to a rally and hugs people? Really? This is what being a hypocrite is, in two tweets.

When did Matthew Dowd earn a reputation as a rational, well-spoken anybody? Republican no less?

RINO #NeverTrumper loved by the left & media… but I repeat myself https://t.co/xoeS8qxrAg