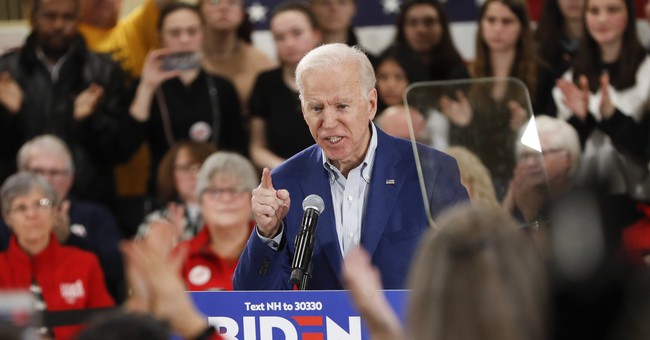 So how is the media dealing with the story of Joe Biden flipping out on an autoworker, cursing at him, calling him a “horse’s ass” and threatening to slap him?

This is insane. Beyond telling the guy he’s “full of shit” Biden gets in his face and then says something about “take this outside.” Mainstream media can’t run cover for this much longer.

Anyone know who the man is? Would love to have him on the show.

Shutting up the woman staffer who desperately trying to stop him from embarrassing himself.

Another angle on the poor staffer. pic.twitter.com/gcSdOomS5f

The incident made Biden look like an uncontrolled loon, someone who couldn’t even take a simple calmly challenging question without freaking out. He also threatened to take the autoworker “outside.”

But if you just listened to some of the media commenting on the incident, as my colleague Streiff reported, you would think what he did was something praiseworthy.

Here’s how a couple tried to spin it.

Kind of amazing that anybody thinks this video makes Biden look anything other than terrific. He shushes the aide who wants to lead him away – and then engages a hostile critic face to face, fact to fact. Impressive. https://t.co/yINIKi4Ffi

Sorry, David, conservatives don’t think it’s very conservative to threaten to slap someone for asking about their Constitutional rights. Plus which there were no facts offered by Biden. Threatening people isn’t a “fact.” The autoworker was absolutely right about everything he said and Biden was completely ignorant talking about “AR-14s” and acting as though an AR-15 were a machine gun with “100 round.” The man had to tell him that machine guns were illegal and that more people are killed with handguns, under 3% with rifles.

Then there’s fully liberal Jonathan Martin, spinning just as fast as he can.

Republican vet sends this over and asks:

“Why on earth is the Trump Campaign sending this out? Do they think this makes Biden look bad? People are going to love this”https://t.co/dbnJK2W7ST

But MSNBC took it a step further, selectively editing the video, editing out him telling the worker, “You are full of shit,” “You’re a horse’s ass,” the man telling Biden to get his finger out of the man’s face and Biden threatening to slap the man in the face. Andrea Mitchell refers to it as Biden “mixing it up” with an autoworker. So people wouldn’t even see all the extreme actions by Biden that made him look like a loon.

MSNBC's take on Joe Biden attacking a union worker in Michigan, calling him "full of sh*t", a "horse's ass," and threatening to slap the worker?

They also selectively edited the video to leave out the insults and the threat. Manipulation! pic.twitter.com/Ub4ZNI3B4z

She also notes that a Bernie Sanders person retweeted Steve Guest’s video of the incident as though that’s somehow relevant to the issue. Guest is the GOP rapid response director. But there’s no question that the video was real so why does that even matter? Sounds like Mitchell was trying to deflect away from what was in the video by acting like the Sanders’ people shouldn’t have noticed it/shared the video.

Asked about him swearing at this voter, Biden pivots and says he is “surprised” Sanders is in alignment with the Trump campaign on bashing him: pic.twitter.com/9zetQZzO2m

So they’re trying to make it about Sanders folks retweeting Steve Guest? Guess the memo went out on how to best spin this.

But check out that last video, notice how he’s walking too. He’s got even more issues. His aides look more like handlers, you can see Symone Sanders thinking about steering him away from the reporters.