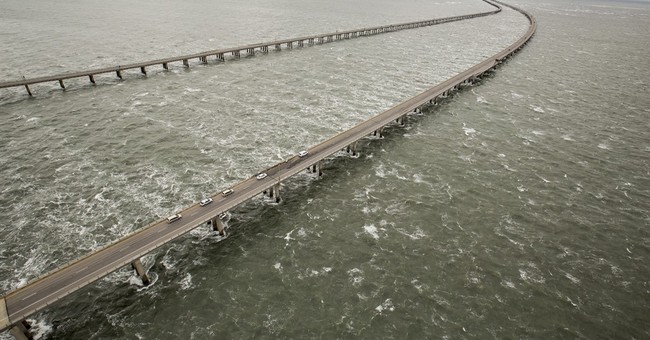 Vehicles sits on the road by a missing section of guard rail along a segment of the Chesapeake Bay Bridge-Tunnel where a tractor-trailer went over the southbound side at the 15-mile marker, Thursday afternoon Feb. 9, 2017, near Virginia Beach, Va. A truck driver died after heavy winds swept his tractor trailer off the 23-mile bridge-tunnel between Virginia Beach and the Delmarva Peninsula, and into the 45-degree, wind-swept waters below, authorities said. A Navy helicopter plucked a driver from the roof of the floating vehicle, but later died, authorities said. (Bill Tiernan/The Virginian-Pilot via AP)

The body of the granddaughter of former U.S. Attorney General and Senator Robert F. Kennedy was recovered Monday evening after she and her son went missing off Chesapeake Bay last Thursday.

Maeve Kennedy Townsend McKean (41) had been sheltering in place with her family at her mother’s home on Chesapeake Bay. She and 8-year-old son Gideon were playing kickball on the beach when the wind blew the ball into the water. McKean’s husband says she and the son hopped into a canoe to try to retrieve the ball. Reports say they were caught in the winds or a riptide and dragged out into open water. Several eyewitnesses would later report they saw the capsized canoe.

The Maryland Natural Resources Police released a statement saying that a dive and rescue team found McKean’s body in 25 feet of water. She was 2.5 miles from the family home. Efforts continue to recover McKean’s son.