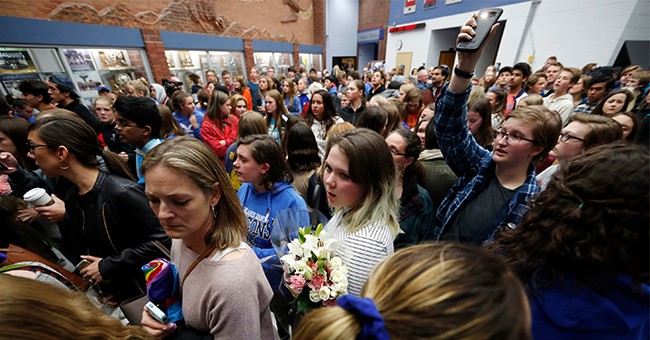 Students and other attendees walk out of a community vigil held to honor the victims and survivors of yesterday’s fatal shooting at the STEM School Highlands Ranch, late Wednesday, May 8, 2019, in Highlands Ranch, Colo. (AP Photo/David Zalubowski)

But now, it appears that the trend is changing – especially with the younger generation. The College Fix released the results of a survey showing that close to 40% of college students on both sides of the political divide believed that those with whom they disagree are not just wrong, they are evil.

Jennifer Kabbany, editor for The College Fix, explained that their survey questioned participants on how they view others with differing political opinions. “The recent College Fix online survey asked 1,000 college students whether members of the opposite political party ‘are not just worse for politics — they are basically evil,’” she wrote.

The survey revealed that 37% of Democratic students and 39% of Republican students believe that Americans on the opposite political party are “essentially evil.” The poll was conducted by College Pulse, an analytics company that focuses chiefly on college students.

Kabbany notes that their findings are similar to that of other national polls that asked similar questions. A 2019 study titled, “Lethal Mass Partisanship,” showed that about 42% of each party viewed the other as “downright evil.”

This particular study also asked participants if they believed that it was justified to use violence to push their political agendas. “Nine percent of Republicans and Democrats say that, in general, violence is at least occasionally acceptable,” according to the study.

These numbers might not seem too scary at first. But the author makes an important point: “If that rate held true on a larger scale, that would mean for every 1,000,000 Democratic college students, 70,000 think violence is justified.”

As the political climate has become increasingly volatile, it comes as no surprise that young adults are becoming more polarized and angry. They see the enmity being displayed by individuals on both sides, and it’s unrealistic to think that it is not influencing their views on political discourse.

Of course, the media is doing its best to stoke as much animosity as they can. By using their platforms to increase tensions over the years, they have contributed to an environment in which politics affects far too many areas of our lives.

For decades, left-leaning outlets have painted people on the right as nefarious actors who wish to victimize the oppressed. Their journalists and educators have viciously cast conservatives as individuals deserving of scorn and hatred. In essence, they have convinced their audience into believing their lies about the right, which has only exacerbated the problem.

But 2016 marked the time when the right fought back. They elected a president who doesn’t stay on defense in the midst of leftist attacks. While this can be desirable at times, it has also aided the descent of American political discourse. Trump’s pugilistic approach was the natural response to the progressives’ constant smears, but not all of his actions on the political stage have been productive for discourse.

Eventually, the Trump era will be over. But what will the political environment look like after he is gone? Will it continue to devolve into complete polarization? Or will Americans finally grow weary of the hostility?

The Big Problem With the Trump Warrant
Bonchie