The Democrat Debate: As Horrible As You Think It Was

There were plenty of things that came out of the first Democrat debate last night. One of them was the conclusion that I would rather have flaming skewers shoved into my eyes and Mr. Blonde from the ‘Reservoir Dogs’ cut off my ears with a straight razor than have to sit through another one of these spectacles ever again. Forget waterboarding. “Watching Democrats debate” should be listed by the United Nations as one of the most extreme forms of torture ever devised.

The event last night was not a “debate.” It was like a really bad variety show skit you might see at the Democratic National Convention: Grandma Moses And The Mosettes. Here’s my overall assessment of the participants:

Hillary Clinton – She no doubt led the way. This was mainly done through attrition as every opportunity she had to speak she turned into a campaign stump speech and would seemingly never shut up, ignoring Anderson Cooper’s plea each time by merely talking louder and being just that much more obnoxious. She took nearly every question given to her — “Secretary Clinton, what do you think about the possibility of there being water on Mars?” — and turned it into something completely different — “I think it’s great but you know what is the worst part is Republicans want to take away women’s health!” — all to the delight of the audience who would squeal at every utterance of something stupid so just so long as it was crazy left.

Lincoln Chafee – If there was an award for Best Performance By An Oversized Muppett, he would win. He also gets the prize for “Weirdest Answer” award when confronted by his affirmative vote for the now infamous Glass-Steagall bill that hardly anybody knows about. He explained that it was his first vote and that his father had just died. As though there was some Senate rule that required a positive vote for a bill you oppose if a family member passes away and/or you’re brand new to that legislative body. Chafee was the only one to make any reference to Hillary’s ethical issues but he only did it during his opening and closing statements for which nobody was paying attention.

Jim Webb – Poor Jim. He apparently has been trapped perpetually in the year 1987 because he was so out-of-place on that stage it was absurd. And by absurd I mean he was the only one who made any real sense when talking about issues that really matter, particularly national security and foreign policy. When asked what was the greatest threat we faced, he got a slight dig in at Hillary Clinton when he mentioned that cyber terrorism was a major threat. Unfortunately, hardly anybody heard him because the audience was still whooping it up over Bernie Sanders goofball answer of climate change as the greatest threat we face. The Democrat Party you remember Jim, is gone. It has been replaced by the party that needs to be asked if they support capitalism.

Martin O’Malley – O’Malley is a better looking and more in shape version of the movie character Del Griffith from ‘Planes, Trains And Automobiles.’ Remember when Neal Page was saying to Del, “… and someone who will listen to your boring stories. I mean, didn’t you notice on the plane when you started talking, eventually I started reading the vomit bag? Didn’t that give you some sort of clue, like hey, maybe this guy is not enjoying it?” That’s precisely how I felt every time O’Malley opened his mouth. He was so boring he barely got applause from a friendly audience of left-wing liberals. I was thinking to myself, “This is the guy who had a character (Tommy Carcetti) based on him in The Wire?” The only resemblance to O’Malley and the character of Carcetti was that they were both Mayors of Baltimore.

Bernie Sanders – I cannot stand Donald Trump, but at least he’s interesting to watch. Bernie Sanders is like Archie Bunker if you took away the bigotry in addition to every single possible interesting thing about Archie Bunker. All you’re left with is an old loudmouth socialist screaming about “OLIGOCKS!” in our midst. Sanders had a chance to differentiate himself from Hillary but instead, decided to give her an out when he declared, “Nobody cares about the damn emails!” much to the delight of the crowd and Hillary, whose circuitry almost overloaded with the smile she had on her face. Bernie Sanders basically admitted he’s not in this race to win the Presidency.

After nearly two and half hours, it was finally over and my ears and eyes were given some sweet relief. The only part of this debate I enjoyed (aside from it ending) was when they returned from break around 10:30pm EST. Anderson Cooper made an obvious reference to the old coots having to run off to bathroom for a pee break during the commercial.

If you were one of the many millions of Americans who did not watch the debate last night, consider yourself lucky. 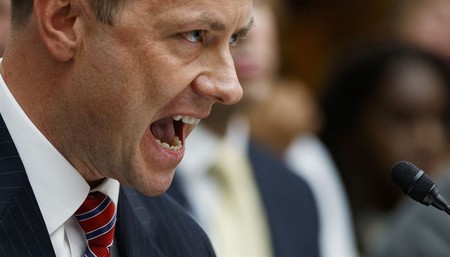