The Greek Tragedy of Obamacare

Have you ever found yourself in a situation where at some point you stop and ask yourself “how the hell did I end up here?” I have, and like a Greek tragedy, usually whatever predicament I found myself in was the result of a number of poor decisions that seemed to compound themselves until they finally reached a point where I had to stop and say “What the hell am I doing?” At that point I had to figure out if there was a way to extricate myself from the situation without hanging myself in the process…

That is exactly where the country is in reference to Obamacare.

To give those numbers a bit of perspective, compare them the rest of the developed world. The Organization for Economic Co-operation and Development publishes the Better Life Index which ranks developed nations by a wide variety of criteria, one of which is health. According to the 2011 Better Life Index survey, in 2009 88% of Americans were satisfied with their health. Of the 34 countries covered in the data, in only two – New Zealand (89.7%) and Canada (88.1%) did citizens report a higher level of satisfaction with their health. Not the United Kingdom (76%). Not France (72.4%). Not Sweden (79.1%). Now, of course health is not healthcare, but the goal of healthcare is to improve or sustain a person’s health.

None of that suggests that there were not people who had challenges, difficulties and, frankly, unfair situations. Those people and those difficult situations did indeed exist. But they exist in every endeavor of man in which human beings play a part. Nothing manmade is ever perfect. But 92% was pretty damn good for a country of 305 million widely diverse people. That doesn’t mean that things couldn’t have improved. From allowing a national marketplace to eliminating tax deductions to implementing tort reform, there were many proposals for improving the healthcare situation in America. No doubt those projects would not solve all of the problems. But then neither does Obamacare. By a long shot.

The problem is, Obamacare not only doesn’t do what it claimed it would do, which was to let everyone who was satisfied with their plans keep them while providing affordable insurance for all those who couldn’t get it, but it has failed in its most basic goals. Millions have lost their health insurance, millions more have seen their hours cut, if they can find a jobs in the first place, premiums are skyrocketing for tens of millions of people and the infrastructure upon which the program rests is a failure of epic proportions.

What’s worse, if that’s even possible, is that Obamacare inserts government bureaucracy and ineptitude and failure directly into the most personal lives of every American. Not only that, the regulations that Obamacare generated (fully 30 times longer than the legislation itself) are nothing but tools with which bureaucrats can provide favors for friends or punish enemies.

At the end of the day, we probably should ask ourselves: “How the hell did we get here?” The answer is actually pretty simple: It’s the 1-2-3 recipe of Liberalism. 1) Take an anecdotal problem that, while troubling, is limited in scope, and project it on the larger population. 2) Propose an overarching government solution that will solve said problem while not harming the rest of the population. 3) Implement a bureaucratic nightmare that not only fails to solve the problem but generally makes the situation exponentially worse.

Such is the history of progressive government. Welfare. Poverty. Mortgages. School bussing. Education – at all levels… Failed programs, over and over again. And now we have Obamacare, where a healthcare system that was meeting the needs of 90% of the American population will be transmogrified into something that meets the needs of far fewer, all while imposing financial and regulatory hardships on hundreds of millions of Americans. 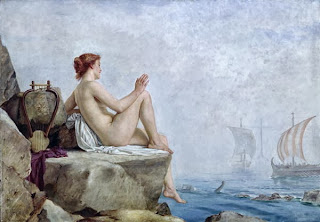 At what point will Americans figure out that these failures do not happen on their own but rather they are the scripted outcome of a Greek tragedy called Liberalism? By now the audience should know the outcome of the story… Big government doesn’t solve problems. It simply takes bad situations and makes them worse. Perhaps the spectacular failure of Obamacare and everything associated with it will be the wakeup call Americans need to see that for all of its beguiling charm and compassionate language, liberalism is nothing more than a siren’s song, promising an island paradise in a sea of human misery. Not only is there no island, nor paradise, but the waters are filled with jagged rocks which invariably destroy every ship whose folly brings it too close.  If we’re lucky Obamacare will be that rare Greek play where the protagonist learns from his mistakes and changes course before his ship is impaled on the rocks…